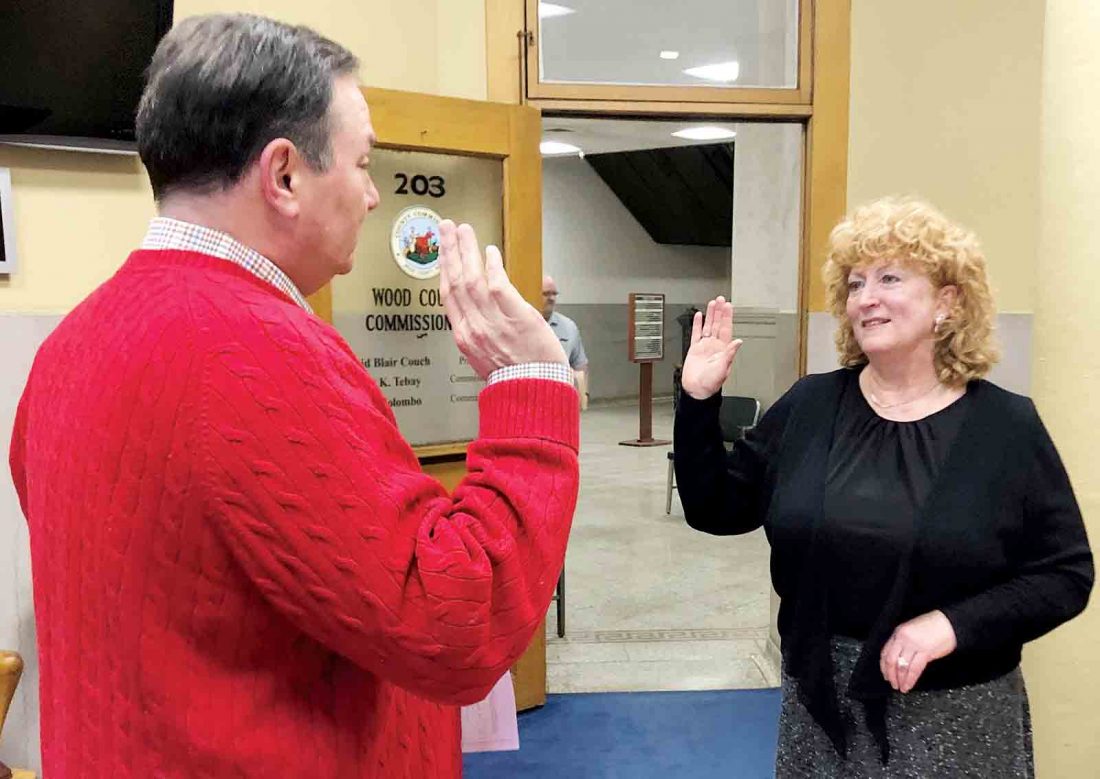 Wood County Commission President Blair Couch swears in Celeste Ridgway as the Wood County circuit clerk on Thursday to serve the remainder of the term, which will be up for election this year. (Photo by Brett Dunlap)

Ridgway was appointed to the position about a month ago by Chief Judge J.D. Beane following the retirement of former clerk Carole Jones. The temporary appointment on Jan. 17 was made for 30 days until a permanent appointment was made.

Commission President Blair Couch said all three circuit court judges have approved Ridgway’s permanent appointment to serve the remaining term, which will end at the end of the year. The position will be up for election this year.

“All three circuit judges have named her going forward to fill the term until the election,” he said.

Ridgway, 56, of Parkersburg filed to run for the position as a Republican. She has worked in the circuit clerk’s office as a deputy clerk the last 13 years. Prior to that, she had 25 years experience in management with a million-dollar company and has overseen 26 employees.

Since taking office last month, Ridgway has implemented changes in procedures and how records are being kept.

“We are in the process of making several changes, but the completion date won’t be for quite some time,” Ridgway said.

Some of that includes getting old records from the old sheriff’s office building scanned in a timely manner. Record scanning was something the commission has wanted to see more of being done so they can clear out storage space in the building.

Ridgway said the process has been stepped up.

“We had the maintenance department bring some cabinets up and have them onsite so we can scan files in their entirety and get them protected,” Ridgway said. “We will contact the (West Virginia) Supreme Court about the retention schedule and see what we can get rid of from that building.”

There is no completion date set on when those records will be done.

“There are a lot of records there,” Ridgway said.

Ridgway said they are giving the office a new look, painting the walls and doing a general cleanup of the space.

“We are giving it a nice look and everyone seems excited about that as well,” she said.

The office is getting prepared for e-filing, which will be in place by July. The office has been in touch with the state Supreme Court to prepare.

“Basically, we will go paperless when that happens,” Ridgway said.

Other counties are on the system and Wood County is on track for the July install date.

Onsite trainers will provide two weeks of training for personnel.

In other business, the county commission adjourned for the annual session of the Board of Review and Equalization.

This is the third year the commission did not have any Board of Equalization and Review to go over property assessments. County officials credited the assessor’s office with being able to go over and work out concerns with property owners before a hearing would need to be held before the commission.

Assessor David Nohe said it is something they strive for, not to have to have a hearing before the commission.

If someone has a complaint, assessors will return to look at a piece of property, taking note of slippages and foundation problems as well as asking for estimates on what it would take to repair these problems.

“If we can’t satisfy them then we certainly support them going to the commission for a hearing,” Nohe said. “We take every complaint seriously.”