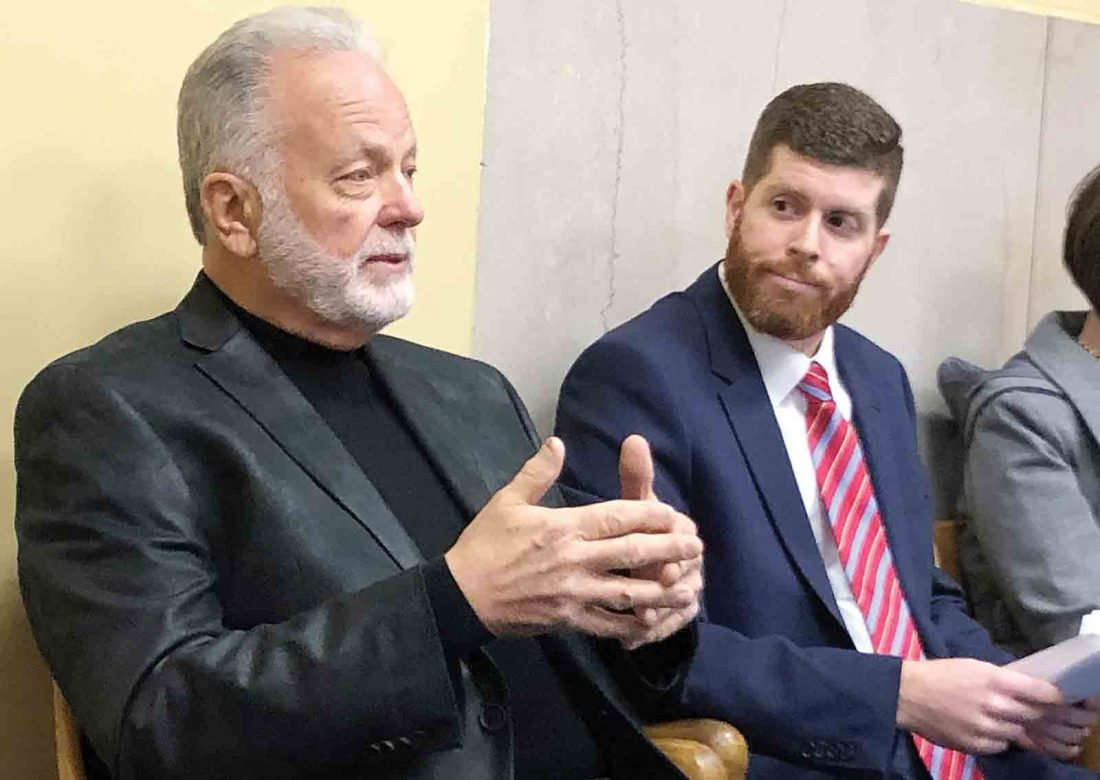 Wood County Assessor David Nohe and Deputy Assessor Andy Hartleben appeared before the Wood County Commission on Monday to discuss how a plan to eliminate the state’s business inventory tax would impact the county. (Photo by Brett Dunlap)

PARKERSBURG — Wood County could lose over $2 million if the state eliminates the business inventory tax, but county commissioners are still willing to support the move if the state can find a way to make up the lost revenue.

Wood County Assessor David Nohe and Deputy Assessor Andy Hartleben appeared before the Wood County Commission on Monday to discuss how a plan to eliminate the state’s business inventory tax would impact the county.

Bob Fehrenbacher, representing the West Virginia Manufacturing Association, appeared before the commission recently about an effort underway to pass the Manufacturing Growth Amendment to the state constitution in the Legislature. This would have to be done by a two-thirds vote in the Legislature, that would then be put to a vote statewide in the general election, possibly in November 2020. If passed, the tax would be removed 25 percent a year over four years.

Commissioners wanted to know how it could impact Wood County and asked Nohe to come in and discuss it.

Nohe, a former state senator, said discussions about eliminating the business inventory tax have been going on for years. During his time in the Legislature, Nohe said lawmakers looked at several angles to address the issue.

”We are one of the few states that have those taxes,” he said. ”My big concern is the population West Virginia is losing.

”We are still losing more population than any state in the union. Those are people leaving to find jobs elsewhere. The administration is looking at something to stop the exit of people leaving West Virginia.”

Nohe’s big concern is how the state would survive the transition time in eliminating the tax which could take awhile. State officials have considered covering the deficit for a period of time to other measures, Nohe said. Although surrounding states don’t have the business property tax, their overall taxes are higher, he added.

Hartleben presented numbers, based on 2020 projected figures, on how the local area would be impacted.

”The (Wood County) Board of Education would really get hit,” Nohe said.

Hartleben said the Board of Education could lose around $6.5 million.

Parkersburg, Vienna, Williamstown, North Hills and the county could lose around $9.8 million combined with the county alone losing $2,073,292, the figures presented stated.

Commission President Blair Couch said in the past deals have been worked out with certain companies where the local development authorities have ownership over equipment and lease it back to the companies so they don’t have to pay the tax. Those special deals did not help local grocery stores, car dealers and other “mom and pop” businesses, he said.

”I would like the Legislature to remove all business inventory tax for all businesses and find ways to make it up,” Couch said, adding such a move could open more potential for a variety of businesses to come to the state.

Commissioner Bob Tebay was in favor of “removing this tax that is harmful to employment in our state.”

Commissioner Jimmy Colombo said other states may not have the business inventory tax, but they have higher property tax rates. He wondered if property taxes would have to go up to make up the difference.

Nohe said the states without the business inventory tax around West Virginia seem to be doing good and can make up for it in a number of ways. His concern is with West Virginia being a small state that has been losing population for years.

A $100,000 property in West Virginia would have double the real estate tax if it was in Washington County, Couch said.

”It is a good trade for us,” Couch said. ”If we lost around $2 million in business inventory tax and lost the jail bill we would probably be OK.”

However, the Easy Rider levy, the library levy and others would end up losing money, Couch said.

Officials said the hope is new business would come in and generate other tax revenue.

The inventory tax is based on self-reported numbers.

The commission agreed to draft a letter to the governor and local lawmakers putting their support behind the measure with an understanding that something needs to be done to replace the lost income. The letter would detail how the change would impact the county.