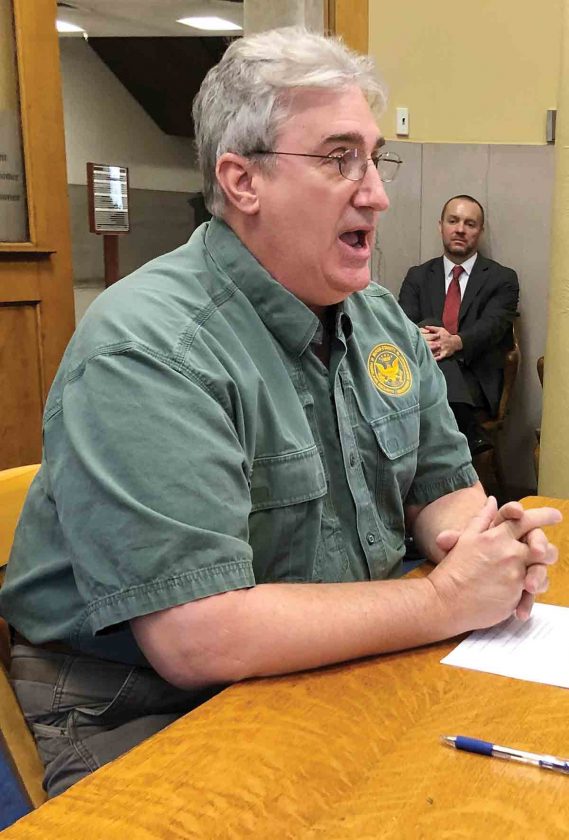 Wood County 911 Director Rick Woodyard appeared before the Wood County Commission on Thursday to discuss operations at the 911 center, what has been accomplished and what is needed. (Photo by Brett Dunlap)

PARKERSBURG –The Wood County 911 Center is continuing to make improvements and enhance services, the director told the Wood County Commission on Thursday.

Wood County 911 Director Rick Woodyard appeared before the Wood County Commission to discuss operations at the center, what has been accomplished and what is needed.

The center implemented its Computer Assisted Dispatching system in 2018 with improvements made to implement a record management system which allows the center to access records of how many times a location was dispatched to and possible medical conditions in the residence, as well as other notes so responding units could know what they might expect. The system also helped them meet requirements.

“It has put us in the next level of protection for the center,” Woodyard said. “We have some of the best and fastest computers.”

The center implemented a keypad system that would speed up time dispatchers enter things which traditionally took a dispatcher with a mouse control longer to do.

The center implemented systems that use GPS technology to find a phone in an emergency situation.

Their dispatchers were honored by the American Red Cross and American Heart Association for providing pre-arrival instructions at an industrial accident where a person’s arm was partially severed. Through their actions, the person’s arm was able to be reattached. Upgrades to communication equipment allow a further reach into the county allowing for better communications throughout the county.

A new communications tower in the Belleville area is getting ready for construction with site work being done and electric run to the site. Anchor bolts need to be set into the bedrock and concrete columns will be poured around that.

“They have to sit for so many days before anything can be done,” Woodyard said. “After that the tower will go up rather quickly.”

They were able to secure $6,000 worth of antennas from another site to be used on this site.

“That will be a savings to the county,” Woodyard said.

A new frequency has been added to the downtown area for any possible emergency around the government square which allows law enforcement a signal in the federal buildings in the downtown area.

In 2020, Woodyard said, they need to look at replacing the phone system in the center as the current system is at the end of its operational life. One price for a possible replacement was around $300,000 which was negotiated down from around $600,000 last year, Woodyard said. He was not comfortable moving forward on that deal with the money he would have available.

“That is something down the road that we are really going to have to look at,” he said.

They also received a grant to replace all of the monitors in the mobile command truck. After the IEI fire, and things learned there, they will be refitting the truck to better serve their needs with additional computer and monitor space.

Another grant will allow them to purchase a “robust” drone to be utilized in search operations as well as tower inspections which will save money and not having to have someone climb the tower to inspect it, he said. They will have three people licensed to fly it.

A problem the center is facing is decreasing revenue from landline fees.

The area is continuing to lose landlines and it could create a financial problem for the center. They spend around $180,000 on fees and licenses to run the equipment.

Bills are being worked on at the state Legislature to deal with the funding issues as more people go away from using landlines. A portion of the center’s funding has come from fees placed on landlines.

People with landlines are now footing the expense for those who don’t. They are looking at other options to address the fees coming in and how it impacts funding as well as making it more equitable for everyone.

The county will have to look at its 911 service agreement with Wirt County in the coming year, Woodyard said.

Woodyard said 38 percent of their staff has three-years experience in place. They have lost people to other businesses and dispatch centers that were able to pay the people more.

The commission unanimously passed a resolution recognizing the hard work of the dispatchers at the center.

“It takes a special person to want to do that job,” Commission President Blair Couch said. “We believe their job is very critical for the delivery of needed services to the community, law enforcement, ambulance service, fire departments and more.

“We wish people wouldn’t make frivolous calls. However, they call 911 because they believe the answer that you will give them.”