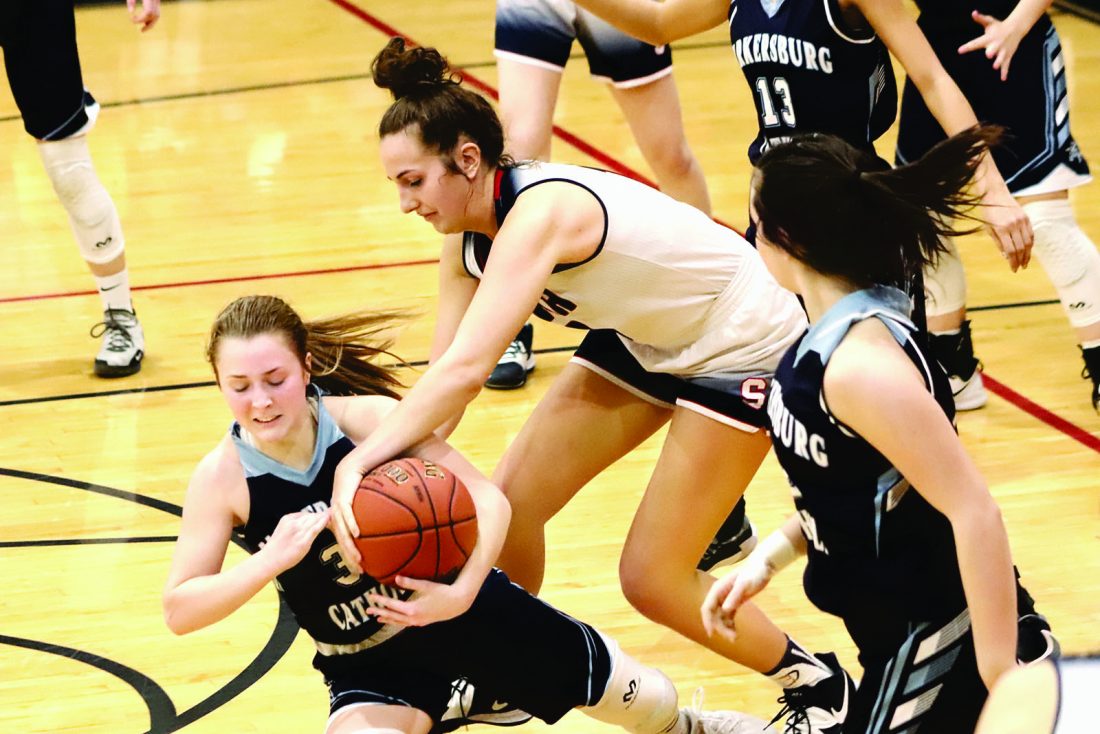 Photo by Joe Albright Parkersburg South’s Makenna Winans attempts to strip the ball away from Parkersburg Catholic’s Madeline Huffman during the Cruasderettes’ 53-43 win Thursday night against the Patriots at Rod Oldham Athletic Center.

PARKERSBURG — If Class A preseason No. 3 Parkersburg Catholic wants to get where it’s hoping to go, head coach Marty Vierheller knows defense is going to be key.

First-year Patriot head coach Rick Dobson’s squad, now 0-4 with a home affair Tuesday against Cabell Midland, was held to single digits in all but one quarter. That was a 19-point second stanza, which allowed the Patriots to hold a 27-25 halftime lead after trailing 13-8 at the end of one.

“We’re just frustrated right now,” admitted Dobson, who watched Makenna Winans double-double with 12 points and a game-high 16 rebounds. “We’re looking for a win, playing hard. That’s all we can do, keep playing hard.

“We just have to get better. They are a very good team and they played harder than us obviously. They shared the ball well and shot well and we got beat.”

Leslie Huffman, who added seven rebounds, three assists and as many steals, canned 8 of 10 from the charity stripe and tallied a game-high 24 points. She was the only PCHS (2-0) player in double figures as the visitors also got nine counters from Madeline Huffman.

“If you had told me we were going to beat Parkersburg South with Aaliyah only scoring six points I really don’t think I would’ve believed that,” admitted Vierheller, whose program had 16 steals, forced 24 Patriot turnovers and held the hosts to just 22.5% (9 of 40) from the floor, which included a 2 of 19 showing after intermission.

“I told Aaliyah she played very well within herself. She didn’t have her best night shooting, but what does that say about her when she did so many things on the defensive end. She played within herself and everybody else stepped up a little bit.”

“She did a great job coming in and guarding Makenna,” Vierheller said of Hardbarger. “Makenna Winans is the real deal. She’s tough. I attribute this win to an excellent week of preparation. We have the utmost respect for Parkersburg South and how they do things and this was a major, major test for us tonight. To say it was a team win really is an understatement.

“It took everybody to get this done, whether or not they played a second. Honestly, this may sound kind of old school, but I am an old school kind of guy. If you want to play basketball for the Parkersburg Catholic Crusaderettes you better play defense. We take great pride in what we do on the defensive end and we take things very, very personally and it showed.”

PCHS, which has a long break until a road trip on Saturday, Dec. 21 at No. 5 Tucker County, managed its five-point cushion after one when Brunny had a steal, got it ahead to Leslie Huffman, who found Ross alone on the block for an easy bucket.

Parkersburg South had its best offensive stretch early in the second after the two squads opened the frame with four straight turnovers. However, Aubree White sank a pair of foul shots, Hannah Wingrove made one and following back-to-back hoops by Winans, Skylar Bosley got one of her team-high three assists when she found Erin Williams (nine points) open for a 3. That 18-14 advantage could’ve been more, but the Patriots missed two front ends of the 1-and-1.

The visitors made turnover No. 11 late in the second, which led to a PSHS 27-23 advantage after Catreena Shears drained a 3.

Vierheller’s troops started the second half strong as Stotts first assisted on a Brunny lay-in and then got a putback to make it 29-27. Rylee Harner, who had eight points and nine boards (six offensive), made two freebies at 6:31 of the third, but PCHS took the lead for good 16 seconds later when Madeline Huffman inbounded the ball off the back of a Patriot and made a short floater.

Crusaderette Jenna Boice, who fouled out while Winans picked up fouls three and four in the third quarter, had a key steal and then managed to get the assist on a Brunny basket to give the visitors a 40-34 cushion entering the final eight minutes.

With less than 2 minutes remaining, South had the ball and still trailed by just six at 47-41, but the hosts committed their 22nd turnover at the time and never got closer.