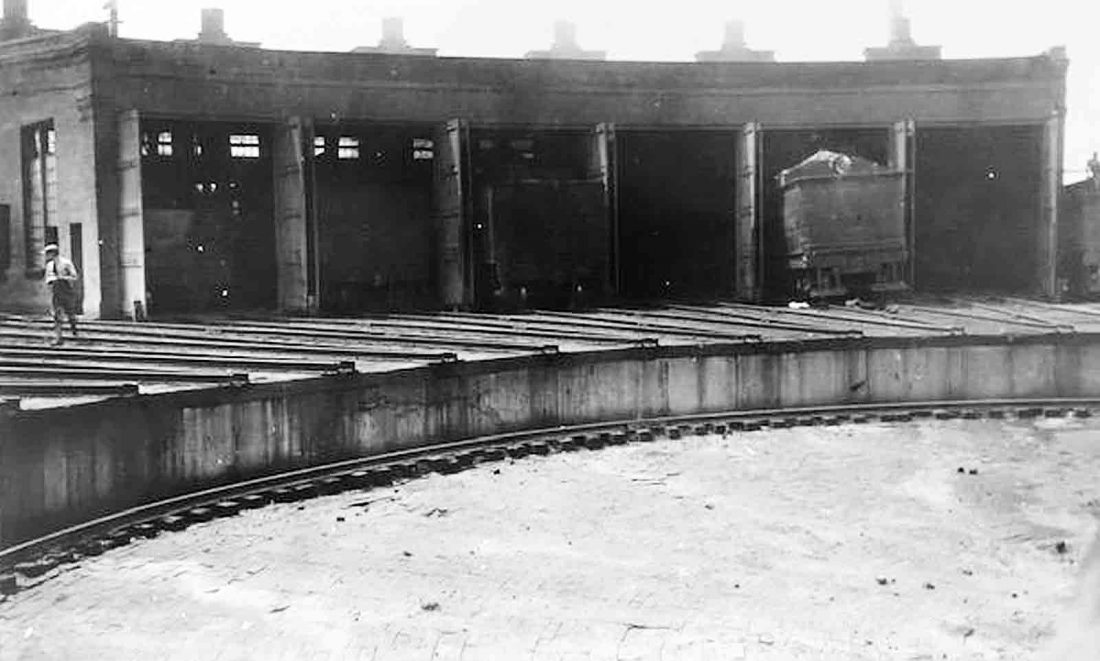 The Parkersburg B&O RR roundhouse. Located in the “upper yard” on Depot Street, the story below credits Wilson Franklin as being the supervisor during construction in the early 1850s. The roundhouse necessitated a “turntable,” shown in the foreground, enabling engines to be switched from one track to another and enter the six-stall “garage” for maintenance. Arsonists caused a fire and ultimate razing of the historic building in the fall of 1989. (Photo from the collection of the late John King)

SAW THIS CITY GROW UP

On the 17th day of May, 1819, Wilson Franklin was born in the town of Point Pleasant, then Virginia, now West Virginia. He died in this city [Parkersburg] at the home of his son, Dr. L.S. Franklin on Avery street on the 7th day of January, 1894. Between these two dates are crowded a great deal of history, but it will only be treated of in this connection locally.

Wilson Franklin moved to Parkersburg with his parents in March, 1833, and his father and himself built the first grist and saw mill in the town. They cut the timber for the mill from the land where the old Presbyterian [Methodist] church stood for many years, now the corner of Juliana and Sixth streets. Some of the stanchions and heavier timbers were taken from Prospect Hill [Quincy Hill] where the African Methodist church now stands. His father ran the mill and young Franklin went to clerk for W. J. Gardner, in a store in the old building on the site now occupied by J.H. Grimm.

He afterward read law under Squire Snodgrass, then a prominent attorney, and was admitted to the bar in 1850. He practiced law here for three years and in 1852, finding law not lucrative, Mr. Franklin, in connection with L. Dudley, George Hopkins, John Hall and John Johnson built the Novelty Mills, near the site where the present mills of the same name stand. The following year he sold his interest in the Novelty Mills and became the general foreman under agent Jas. B. Howes, of the B. & O. R.R. and superintended the construction of the B. & O. round house.

Leaving the employ of the railroad company he erected and operated the first sash and door factory in the State, on the ground now occupied by the Parkersburg Gas Company. This business he conducted for a number of years, and then established in connection with J.M. Mitchell, now dead, what was known as the Ohio River Mill, where the water works pumping station now stands.

Mr. Franklin knew the city when the population, all told was 300 souls, and in after years was a member of its council and held other positions of trust. In 1840 he was second in command of the large body of men who rode from this place to Clarksburg in honor of Gen. W.H. Harrison, then a candidate for the Presidency. The men were under command of Gen. J. J. Jackson, long since deceased.

Altogether, the life of Wilson Franklin was an interesting one and if properly written would be almost a history of Parkersburg for more than half a century.

Wilson Franklin was an upright, honorable Christian gentleman; temperate, as his long life attests, and a good and useful citizen. One child, a son, Dr. L. S. Franklin, of this city, survives him, his wife dying many years ago. A good man has gone to his reward.

Bob Enoch is president of the Wood County Historical and Preservation Society. If you have comments or questions about Look Back items, please contact him at: roberteenoch@gmail.com , or by mail at WCHPS, PO Box 565, Parkersburg, WV 26102.