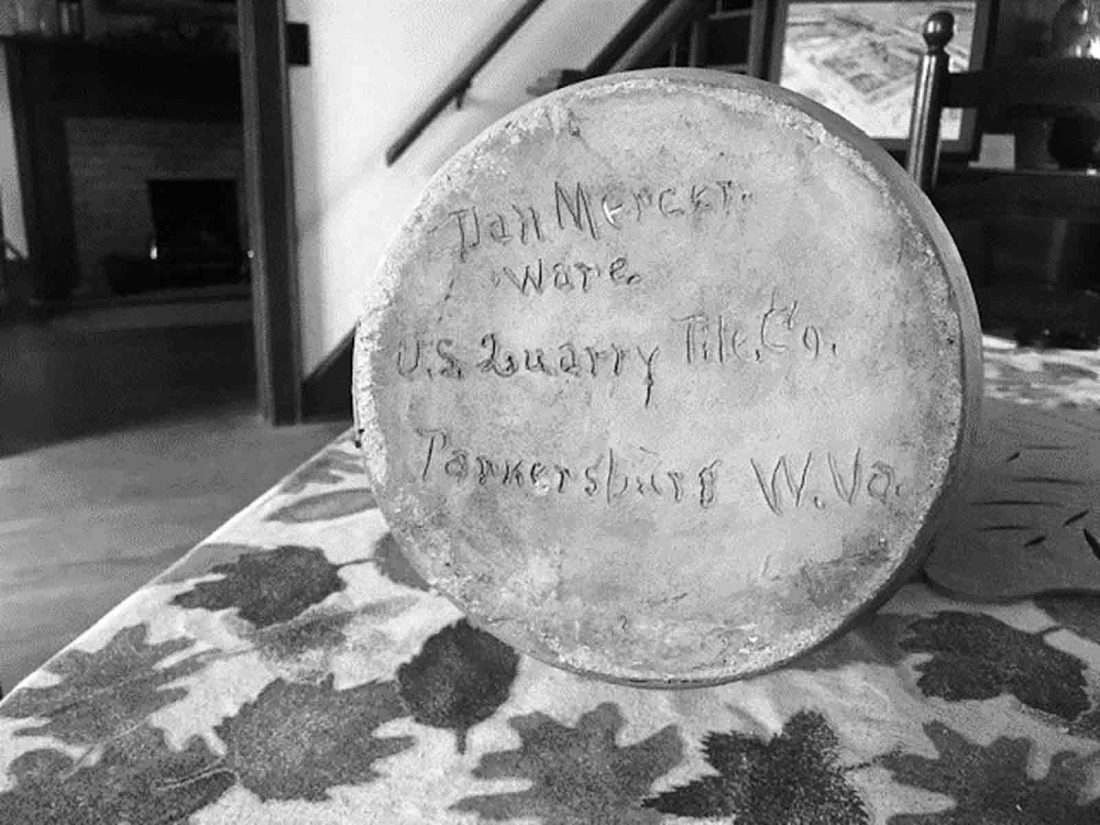 Etched on the bottom of a 15” eared jug is: Dan Mercer ware, U.S. Quarry Tile Co., Parkersburg W.Va. Though Mr. Mercer had his own shop at the A.B. Chance plant in South Parkersburg, he often used the kilns at the “Tile plant,” just east of Parkersburg on Rt. 47. Dan Mercer made many personalized pieces of pottery and smallish items such ash trays and novelty items that have become quite collectible. As the news item below attests, when he first came to Parkersburg he worked for Donaggho Pottery, a.k.a. Excelsior Pottery. Mr. Mercer’s death record lists him as a potter; born in 1865, he died in 1951. (Photo Provided)

Mr. Dan Mercer, the new potter, is spending the holidays at his home in Green County, Penn., and will remain a few days; the boys are all anxious for him to return.

It is reported that one of the Riverside police has been tried, convicted, dismissed and blacklisted for failing to make some important arrests on Christmas Day.

Messrs. Henry Behen and Frank Higginbotham, of Porterfield, Ohio, pottery, made a flying visit to their old friend, Capt. Layman, at the Excelsior Pottery, on Saturday night. Mr. Behen reports that they are preparing to erect extensive tile and flower pot works in connection with their pottery.

Mr. and Mrs. J.A. Graham received quite a valuable Christmas gift in the shape of a fine boy babe. The Captain claims that each baby increases his wealth to the extent of one thousand dollars, but he does not have an annual increase of wealth.

Thomas, better known as “Turk,” Taylor, spent Christmas at Kanawha Station, and he reports that he was married to one of the fair daughters of that locality on Christmas Day.

William Taylor is meeting with great success as setter and burner at the Excelsior Pottery.

Walter Donaggho is taking a much needed rest.

John Donaggho, who has been attending Marietta College, is spending a few days at his home on the [Sand] Plains.

John B. Bartlett is still grinding clay at the pottery and he continues to grow in favor with the turners by his kind and accommodating disposition. Robert Lotterberry is still one of Messrs. Donaghho & Sons most trusted employees. His son, David, who has been lying very low with malarial fever for some time, is able to get out again. He will return in a few days to his duties with the Union News Company at Cleveland, Ohio.

It is understood that a dance will be given at the residence of J.J. Bartlett next Thursday night, the proceeds to be used in building a boardwalk from the pottery to Spring Dale. The dance should be well patronized as a boardwalk is badly needed.

Be careful what you wish for

This week, I had a phone conversation with a friend of mine, Harry, from northern New Jersey who works in New York ...

Live PD host and legal analyst Dan Abrams returns to the book world along with David Fisher with “John Adams ...