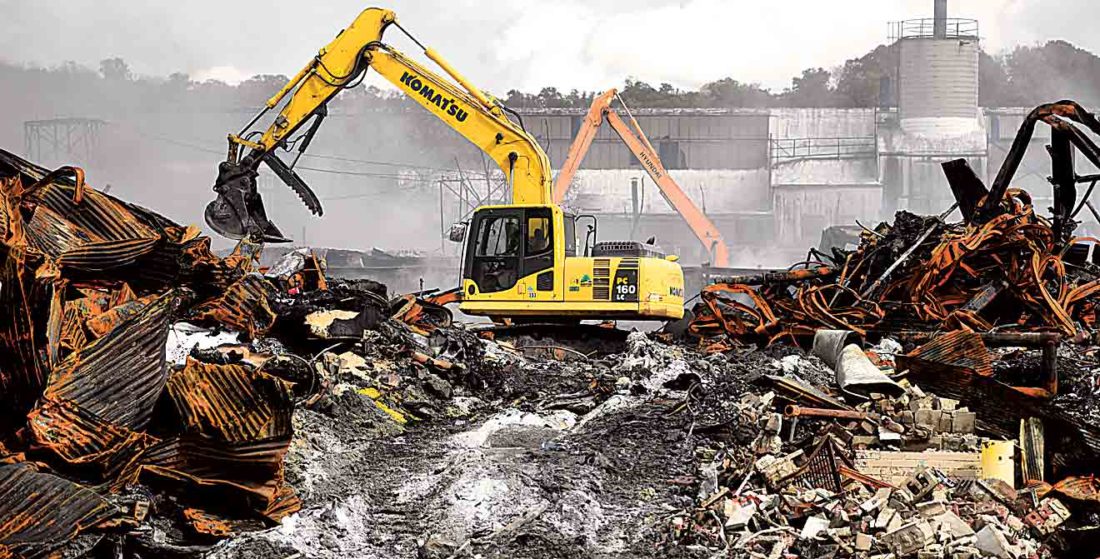 News and Sentinel File Photo Heavy equipment moves charred pieces of metal after last October’s IEI plant fire. Portions of one of the first lawsuits filed in connection with the fire have been dismissed by a federal judge.

PARKERSBURG — Portions of one of the first lawsuits filed in connection with the IEI plant fire last October have been dismissed by a federal judge.

Chief Judge Thomas E. Johnson with the United States District Court for the Southern District of West Virginia issued a memorandum opinion and order on Friday outlining the background and legal standards at issue in the order.

The fire occurred on Oct. 21, 2017, at the former plant site on Camden Avenue in south Parkersburg which was being used for storage of various materials. The fire continued for six days before finally being extinguished. For much of that time, a large plume of smoke rose from the site of the fire.

It was one of several lawsuits filed in the aftermath of the October 2017 fire.

The suit alleged the warehouse was improperly and negligently susceptible to fire. The lack of an adequate fire suppression system, improper maintenance and storage of flammable materials and improper management and supervision were all factors making the building susceptible to fire, according to the suit.

The suit argued that the fire caused the plaintiffs to be exposed to pollutants, horrific odors and air contaminants. The fire allegedly damaged them personally and interfered with them being able to enjoy their property, resulting in damages.

The plaintiffs were seeking special and punitive damages, all appropriate medical monitoring costs, and attorney fees and costs, including pre-judgment and post-judgment interest, with the amounts to be determined at trial.

Johnson’s order granted motions by the defendants to dismiss the counts of public nuisance, private nuisance, negligence, gross negligence, trespass, medical monitoring and unjust enrichment. The only remaining count in the suit is negligent infliction of emotional distress.

In the private nuisance complaint, Johnson ruled that the interference alleged by plaintiffs was the contamination of the public air, which he ruled was an interference in a public right. The plaintiffs did not make any showing of a private nuisance, he said, resulting in his decision to grant the defense motion for dismissal of that count.

Under public nuisance, the plaintiffs failed to demonstrate a special injury different in kind from that suffered by the public in general, according Friday’s order. Furthermore, the order stated plaintiffs were not public officials and failed to meet the requirements as articulated by the West Virginia Supreme Court of Appeals regarding appropriate plaintiffs for public nuisance claims.

Regarding the negligence claim, the order stated plaintiffs failed to assert that they currently suffer from any illnesses or diseases caused by their exposure or that they will be subject to “reasonably certain” future injuries. The plaintiffs also did not specify any compensable injury to sustain a negligence cause of action, while also failing to sufficiently state a claim under the higher standard of gross negligence, the order stated.

The order also dismissed the trespass, medical monitoring and unjust enrichment counts in the suit, ruling that smoke and fallout from such an event do not constitute trespass under West Virginia code, while the medical monitoring issue involves only conclusory statements which are insufficient to sustain such a claim as made in the suit.

Contacted Friday evening, Jim Leach, attorney for the plaintiffs in the case, said he was aware of the order but had not had a chance to view a copy of the findings. He couldn’t comment on Friday’s order, but said he and his co-counsel will be reviewing the order and considering what steps they can take moving forward.