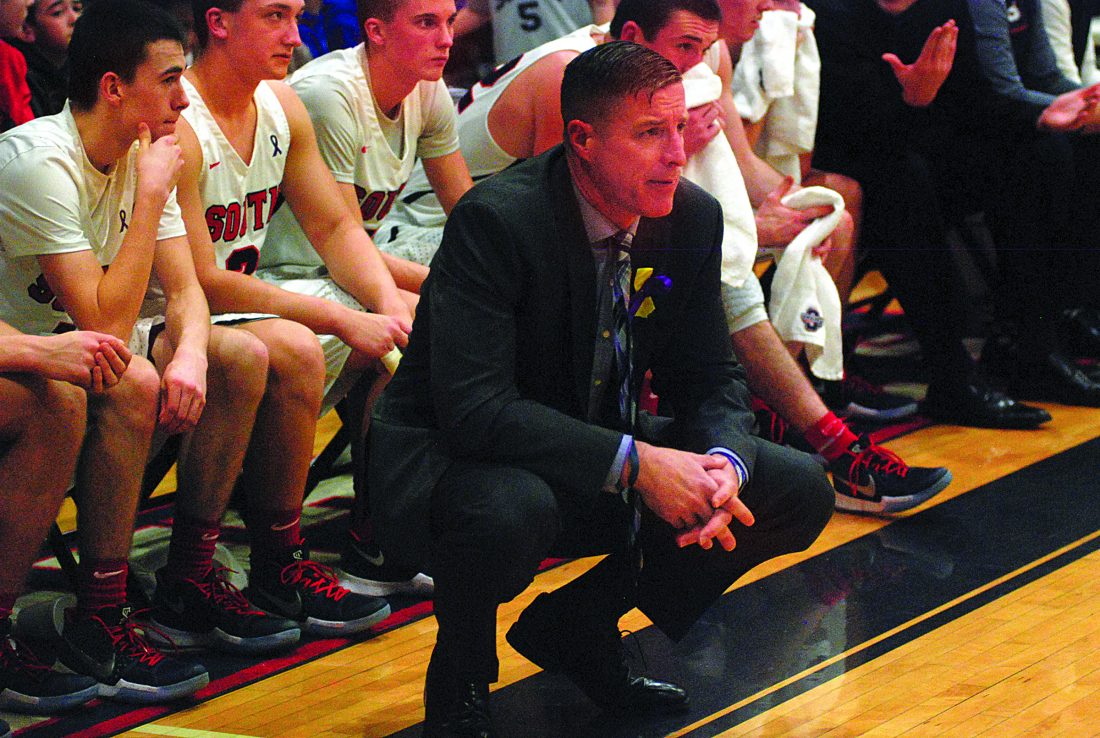 File photo Parkersburg South boys basketball coach Mike Fallon looks on during a high school basketball game at Rod Oldham Athletic Center. Fallon put together a record of 149-80 with seven state tournament berths as head coach from 2011 to 2019. After stepping away last season, Fallon is returning to the helm for the Patriots.

Patriot fans can rest assured that’s still a top priority after Fallon was hired on Tuesday night by the Wood County Board of Education to become the leader once again inside the Rod Oldham Athletic Center.

After spending nine seasons with the program, which included three 20-plus win campaigns and seven straight state tournament berths in Charleston, he opted to step away following the 2018-19 campaign.

“What a difference a year makes. It’s amazing,” admitted Fallon, who replaced current University of Charleston assistant head coach Brett Rector. “God works in mysterious ways, crazy. I think it will be an easy transition.

“Even the kids who were freshmen last year I didn’t get to coach, they’ve been coming to camps since they were in third grade. I’ve watched them play all the way through. It should be an easy transition for me and the kids.”

After he was officially hired, Fallon made contact with his players and parents to talk about the future.

“That’s the biggest thing,” Fallon added. “I’m thankful to Ms. (Betsy) Patterson (principal) and Mr. (Roger) Thompson (athletic director) for giving me another chance to do this. That’s big. It was kind of tough and I tried to stay away. I knew I’d miss it so bad.

“I talked to coach Rector Monday night for about an hour and a half, just a great guy. He did a great job there and just continued everything and carried on what’s been there in the past and what a great guy. He wants to be a college head coach and he’ll do it.”

Fallon, who has 149 career wins against 80 losses, was going through a difficult time at the end of last year on several fronts.

Aside from being eliminated at the state tournament, the coach had lost his brother James as well as friend and Patriot scorekeeper Keith Barker.

“It was kind of weird how it worked,” explained the coach. “I went on an Emmaus Walk for church and it was the weekend of the regional tournament. In the past I would never have went to that event. I’d have stayed in basketball and the gym and my life wouldn’t have changed.

“That kind of woke me up at that point and maybe it was God’s way of saying this is where you need to be during this time. It was kind of weird how he (Rector) left and we talked about that. God works in mysterious ways. We both kind of figured out where we wanted to be about the same time. I don’t think anything is coincidence. I think things happen for a reason and everything.”

Although Fallon stayed away from the ROAC, he was able to watch all of his son Seth’s games and follow along during his freshman year at Glenville State College.

“I didn’t miss a game,” Fallon added. “I think the biggest thing was spending time with my family this offseason. When I left it was one of those things. My brother passed away. We lost Keith Barker and I was mad at the world and I think I just didn’t know how to handle it and we hit that frustration point. We lost so many close games. It wasn’t even the basketball. I had to get my life straightened up and back in order where it should’ve been.

“God definitely showed me I wasn’t where I should’ve been. I learned a lot and my faith in God this offseason wouldn’t have happened if I would’ve stayed that year. I’d still been battling and I’m a better person and a better Christian today for taking that year off. My life has changed tremendously the last year. You can’t hold on being angry about death and you have to kind of let God take over. It was a crazy year.”

An adapted physical education teacher at Martin, Fallon said he felt it was the best job in the county.

“I travel all over the county and I work with kids with physical handicaps,” he said. “Those kids are great and fun to work with.”

The idea of taking a year off was in part a little shocking to his family.

“I think Seth was kind of bummed when I stepped away,” Fallon added. “I think he wanted me to continue. I think he’s happy now that I’m back coaching and everything. It was one of those times in my life. Things just felt like I had the weight of the world on me and I didn’t figure out how to realize it the right way until God.

“She (wife Ann) was kind of like Seth. I think she was disappointed I stepped down last year. She knew I still wanted to but it’s been good for us and we’ve been able to spend time together for years we hadn’t. Now, I think she’s ready more for me to get out and go away. I couldn’t ask for a more supportive person in the world. She’s the best and is unbelievable.”

Bloodline family support is one thing, but the atmosphere surrounding the Patriot program is something Fallon also yearned for.

“Those guys are super. Billy Camp and Mark Cothern, they kind of keep this together year around and running the offseason teams and all the stuff they do during the season,” added the coach. “Billy is invaluable. He’s one of those guys. He does everything.

“That’s the one thing I’ve never done, taken Billy for granted because I appreciate everything he does. He’s a great person, not just with basketball and that’s why we try to keep those kinds of people in our program. That’s how your program grows with the people around these kids.”

Obviously, Fallon said he dearly missed everything involved with being the head coach at Parkersburg South.

However, he also understood “until I got my life figured out it was kind of one of those things that should’ve been on the back burner until I figured it out.

“Once you are away you realize it’s tough and it was a tough time and everything. I was mad at the world. I knew the reason, but didn’t know how to get through that I guess.”

His Emmaus Walk in March, where he couldn’t have a cell phone or a watch, proved to be exactly what he needed.

“It was just you and God,” Fallon said. “You’d better figure it out. It was the best thing that happened to me even though I was away from my family, not having that phone, not caring about time.

“That was before the virus stuff started hitting. It put things in a whole lot of perspective for me. It changed my life forever. It really, honestly, truly did.”

Fallon said after he was hired he received numerous texts from former players congratulating him and “that was kind of neat to have those guys’ support. That was really neat.”

This past season the Patriots and coach Rector advanced to the state quarterfinals but never played a game due to the COVID-19 pandemic.

That also was something not lost on Fallon.

“If you haven’t realized not to take things for granted by now you probably need to do some soul searching,” he admitted. “Even the little things, state basketball tournament, missing prom, missing graduation and missing things you sometimes take for granted.

“Every year you kind of look forward to it and all of a sudden it’s gone. You can’t take it for granted. I think when we get back, kids and everyone will appreciate things so much more and take more pride in the stuff that we do.”

Hopefully, Fallon will be able to coach his players during July’s expected three-week summer period.

Without question, he’s ready to get back at it with a renewed focus and determination.

“We’ve got some really good kids coming and some good kids coming back,” Fallon said. “I think the program is in great shape for several years. Getting one of those rings, that will be the challenge.”