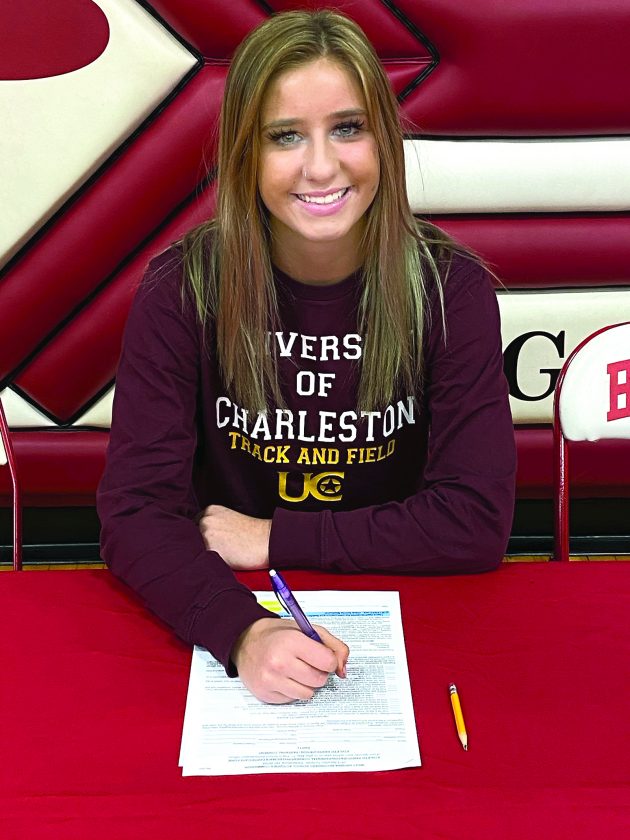 Photo by Joe Albright Parkersburg High’s Emily Kupfner overcame more than just on-track hurdles during her journey to the University of Charleston’s track and field team. But, she did and is ready to contribute immediately for the Golden Eagles.

PARKERSBURG — Parkersburg High senior Emily Kupfner overcame more than just the on track hurdles during her journey to the University of Charleston’s track and field team.

Conquering the daily battle to breath and finding the strength to push through events was a daily occurrence. Competing with asthma and vocal chord dysfunction at times even threatened to take her off the track.

“They (my vocal chords) are supposed to stay open, but they close at times. And it is hard to breath,” said Kupfner. “I even thought I wasn’t in shape to run in college and that my health problems would hold me back.”

But, thanks to her doctors and her own willingness to persevere she’s returning to the track this spring for the Big Reds and for the next four years as a member of the Golden Eagles.

Well … There was just another small obstacle. Sister Megan already attending and running track at UC took up space in her mind. “I was definitely not wanting to be in my sister’s shadow by going there,” she said with a chuckle.

However, big sis really sold little sis on the campus and the coaches.

“I just really liked it down there. It already feels like home and it is an hour away and I know a lot of people thanks to my sister,” said Emily, who also took visits to West Liberty and Indiana Tech.

Knowing what her program would be also played a huge part.

“We definitely aren’t surprised,” said PHS head coach Lia Fleek, on Kupfner’s commitment to run at the next level. “We knew she would run the 300 hurdles from the time she got here (to PHS) and probably specialize in it.”

While Kupfner still chases an elusive state title, she’ll definitely be ready to step in right away.

“The 400s will likely be my biggest event. I already overjump the 300s and get yelled at for it, so the height won’t effect me,” said the Big Reds’ senior, who also anchors what was one of the best shuttle hurdle groups in the state last season.

Another contributing factor adding to her preparedness comes in her plan to lower her times this season and in the offseason. She’ll also need the practice reps indoor as UC runs an inside season, as well.

“I will just do whatever they need me to do,” she said.

While she meets any task asked of her, the course of study runs similar to her athletic task.

“I am majoring in exercise science and I have just always been into sports,” said Kupfner.

With this decision out of the way, her goals this year are simple. Recruiting solid hurdles lands highly on said list. Kendal Dominic’s injuring her ACL and Delaney Cox graduating left just sophomore Holly Chapman and Kupfner in the quartet. Also existing in her single events is room for Kupfner to move up at the state tournament. The graduation of five seniors from the both the highs and lows field certainly helps this outlook.

These along with her college goals are something Fleek believes Kupfner will attack with vigor.

“The fact she tries to persevere suits her well. She doesn’t just have asthma where a puff (on an inhaler) will do. And she doesn’t let it keep her from doing anything. She has a determination and desire that will make her very successful,” she said.