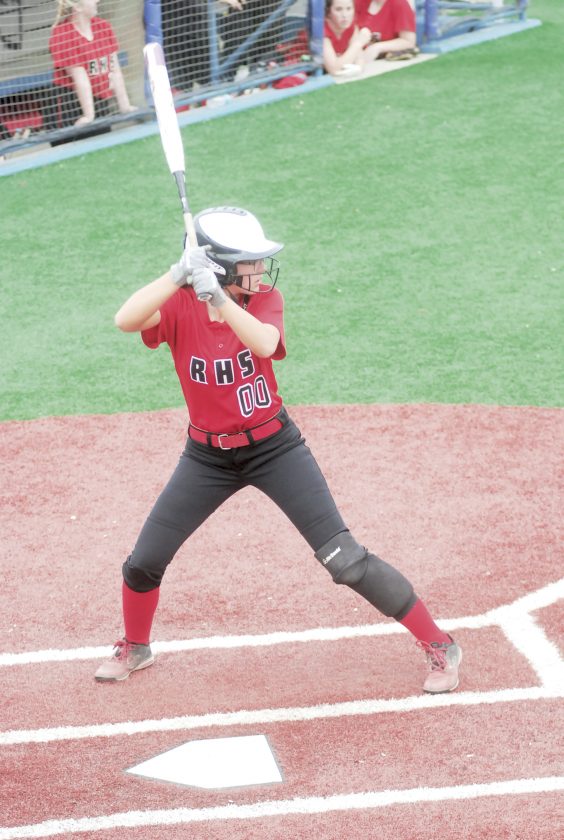 Photo by Jay W. Bennett Ravenswood’s Rylin Tabor takes her turn in the batters box of a 2019 postseason game. Tabor along with teammate Emily Stutler led a Red Devil’s team featuring plenty of experience and youth for head coach Cindi Carmichael in 2020.

RAVENSWOOD — For head coach Cindi Carmichael and her Red Devil softball team, 2020 stood as another chance to remove a thorn in their side. Even though the group entered the last three sectional tournaments armed with a great offense, something always popped up in their way and ended the season.

Last year, Wahama pitcher Hannah Rose largely silencing another lethal offense over the final two games of the Class A Region IV, Section I tournament served as that final word. As a result, Carmichael and company entered an early offseason to say goodbye to former Class A first-team all-state player Kendall Bowen via graduation.

However, there were plenty of building blocks returning, along with impressive newcomers, for the group to make another run at getting over the sectional hump.

“All the pieces were there and also in our offseason training program we had more consistency with 14 to 16 girls coming in to lift three days a week,” said Carmichael. “They wanted it and I think they knew if they played their game we could have done something this season.”

As the program had never been to the state tournament, there certainly were plenty of incentives to be the first group who could potentially start a special run.

Likely leading the charge, as usual, was the offense.

Rylin Tabor’s all-state first team stats of a .510 batting average with 51 runs-batted-in and four home runs gave the Red Devils a powerful middle-of-the-order bat to construct a lineup around. Teammate Libby Hall’s .469 average along with eight doubles and her 36 RBIs then inserted another big stick into the order.

Taylor Hatcher (.431BA), Hannah Smith (.426BA) and Braylin Tabor’s (25 RBIs) abilities to whack the cover off the ball added to the anchor of the offensive machine.

Having those established players to count on certainly made things interesting, but the addition of 11 new freshmen, only one of which had never played softball before, threw in a wrinkle Carmichael’s never seen before as the Red Devils’ leader.

“It was probably the most depth we have had in a long time,” she said as she also penciled in 13-game winner Jamie Naylor along with her 2.83 earned-run-average on the mound. “While we had a starting nine I had another starting nine in my head I wouldn’t be afraid to start either.”

Chief among those ninth graders were five who had established themselves early in Emily Curtis, Patty Kennedy, Abby Hood, Reagan Tribett and Rikki Hatcher. There may have been others, but there wasn’t enough time for further evaluation before the season was put on pause due to the COVID-19 pandemic.

Curtis and Kennedy being trusted with the important defensive positions of shortstop and catcher respectively provided just a glimpse of Carmichael’s vision for the future.

Hood, Tribett and Hatcher then coming in from the bullpen or their fielding position one after the other and throwing speed along with controlled stuff completed a painful picture that could be in store for opponents over the next three seasons.

What Carmichael saw in them makes having no season an even tougher pill to swallow for the Red Devils.

“They were the ones who had the hunger to play and weren’t afraid of being freshman and challenging the kids that were already here. I really love that passion and drive and fearless attitude. A lot of times freshmen don’t have that, but they just wanted to get out there and play,” said Carmichael. “Rylin and Emily Stutler, my two seniors, even mentioned how excited they were to play with these girls because they knew how good they were.”

Waiting for all of them was a tougher schedule including a trip to Sluggerfest and the return of a Parkersburg South team also deep with experience.

Now, fans and observers will never know what this group could have accomplished together.

As for the 2021 season, Ravenswood doesn’t have to do a big shakeup, though the losses of Tabor and Stutler won’t be easy to replace. Each’s unique approach and attitude to the game made them easy leaders. “They certainly set a good example for the underclassmen to follow with their work ethic on the field and in the classroom,” said Carmichael.

This impression already appears to have rubbed off on the younger members of the group. Carmichael anticipates much of the team to return to take care of unfinished business. “I have talked to some of them and a couple are still going out and practicing and still working and still are hoping for summer ball,” she said.

Carmichael also hopes for a chance to honor her two seniors as well as an opportunity to finish evaluating her young players over the three-week summer period.