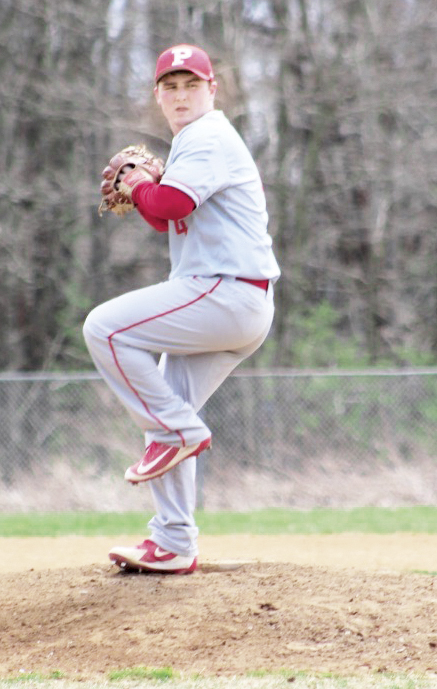 Parkersburg’s Kyle Moore prepares to deliver a pitch during a 2019 regular-season game. Moore’s days on the diamond are just beginning as he signed with West Liberty. Photo provided

PARKERSBURG — Kyle Moore would rather be playing baseball.

The Parkersburg High School senior, who is set to attend West Liberty University and continue his career on the diamond for skipper Eric Burkle, has been through plenty the past two months.

With four years of football in the books and one spring left of baseball, Moore was looking ahead to college, but was ready for whatever his final prep season was about to thrust upon him.

Aside from finishing with a 4.25 GPA as a senior, the pitcher/outfielder said he’s basically heading to WLU as a sophomore thanks to earning college credits at West Virginia University at Parkersburg.

“I’m going into athletic training as my major,” said Moore, who was looking forward to playing summer ball with American Legion Post 15. “After that go to PA school. What they have is this three and two.

“I’ll get my undergraduate in exercise physiology and then I’ll get my master’s in athletic training. Then go another two and a half years to PA school and become a physician assistant. It’s all a matter of getting into the PA program.”

Even though the Big Reds weren’t expected to challenge for a Class AAA state championship, Moore wishes he had his final spring with his teammates and coach Alan Burns.

“We were pretty excited,” he said. ” We had a really young team this year. It was going to be interesting to see how all the pieces were going to piece together. We were putting up good numbers in the weight room all winter and we were excited to see how that translated on the field.

“We had about 10 practices when everything hit. The following week we were supposed to have three games, including a game against South.

We were excited and then all of this hit. I mean I hate losing your senior year. Couple of the guys I’ve played with since 7 years old. You don’t get that last final game to play with them.”

Moore was the Big Reds’ top returning pitcher after working 22-plus frames as a junior. He recorded three decisions, which included a pair of victories, to go along with a 2.51 earned run average and one save.

“I’ve kind of accepted it,” Moore expressed of the whole COVID-19 situation. “It is very hard not being able to have that senior season. I was going to be one of our main pitchers and play a lot in left field.

“Last year I pitched a lot of games out of the bullpen. I was mainly a relief pitcher. Going into my senior year, I was making the transition to a starting pitcher and I played a lot in the outfield last year.”

Things are kind of looking up it appears for the Big Red, depending on how things unfold with the ongoing pandemic.

“It’s been pushed back to June 26,” Moore said of his delayed graduation. “Right now I think it’s supposed to be regular, but they haven’t told us much detail. I think they are waiting to get closer and see how open the state is.

“I mean the main thing (with COVID-19) is just losing the senior baseball season, not getting to play your final season. You’ve played with them the last four years and probably more and just not getting that experience.”

It took just a single trip for Moore to realize where his home for the next few years was going to be.

“I got into contact with graduate assistant coach Joel Jarrett,” he explained. “I went up on a couple visits and I really liked the campus and the coaching staff. I went on another visit and worked out with some of the guys and they were awesome up there.

“I fell in love with the campus and the atmosphere of the school. There were a couple of schools who talked to coach Burns about me, but I just love West Liberty and the program, but I didn’t go on any other visits anywhere.”

If Moore can catch a break this spring, it will come from playing baseball this summer in some way, shape or form.

He’s thankful for the opportunities and experiences he had while a member of the red and white.

“You look back at all the people who have played through the program at PHS of baseball,” Moore added. “You got Nick Swisher and those guys. It’s fun to make your own memories with the same program he went through.”

When asked whether he felt prepared for the rigors of being a Division II student-athlete, Moore didn’t hesitate.

“You’re always a little bit worried,” he said. “Division II, going to the next level, it’s going to be a different pace of play and people as good or better than you.