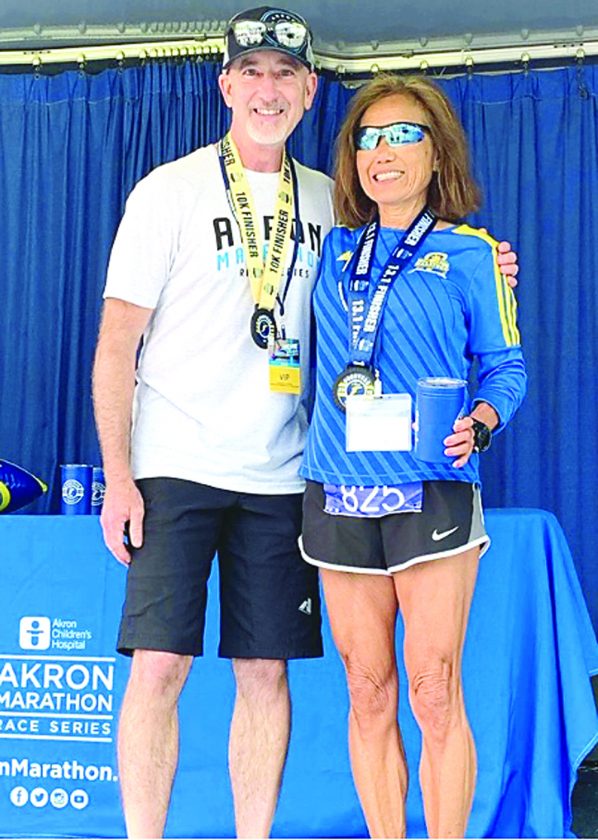 Photo Provided Jeannie Rice, 71, of Mentor, Ohio, unofficially set a new age group world record during the Goodyear Half Marathon last week, running the 13.1 miles in 1 hour, 37 minutes and 7 seconds. She is pictured above with Akron Marathon Charitable Corporation Board Chairman, Bret Treier.

So, what will Rice, a native of South Korea, be doing for an encore?

“I’m running in the Half in Parkersburg,” she said.

The annual Parkersburg News and Sentinel Half Marathon is scheduled for 8 a.m. Saturday.

All in all, Rice had a very productive weekend in Parkersburg.

But then, Rice has pretty much excelled on the race course since she started running at age 35.

Born and raised in South Korea, Rice moved to the United States and the Cleveland area (Mentor) when she was 19. Originally, she thought about becoming a nurse, but then changed her major to business in college. Later, she owned a dry cleaners business and then became a real estate agent.

Along the way, Rice married, raised two sons, and currently is a grandmother to two teenage girls.

Shortly after a visit to Seoul, South Korea, in 1983, Rice got the so-called “running bug.”

“I started running to lose weight,” she said, laughing.

The 5-foot-2 Rice weighed maybe about 105 pounds, and she believed that was too much.

About the only time, Rice takes any time off is when she skis in Colorado or golfs. She used to scuba dive but gave that up.

Not surprisingly, Rice has competed in races all over the United States and the world. She’s of course run in the prestigious Boston Marathon several times, and had crossed the finish line about an hour before the 2013 explosions.

Rice has also ran races in China (The Great Wall), London, England, Ireland — just about everywhere, except in her native land, Japan, and Russia.

“I’m hoping to run in Japan next year,” she said.

As far as world records go, the one in Akron was not Rice’s first. Early last October, she ran the Chicago Marathon in a record time of 3:27.50. According to Runner’s World, she eclipsed the previous standard for 70-and-over women by nearly eight minutes.

“You know,” said Rice, laughing, “I’ve won thousands of trophies but I donate them all to the YMCA.”

“I keep the medals, though,” she said.

Rice said she will arrive in Parkersburg Friday.

“People always ask me how I do it,” she said. “And all I can say is that I train hard — and I’m very lucky and very blessed.”