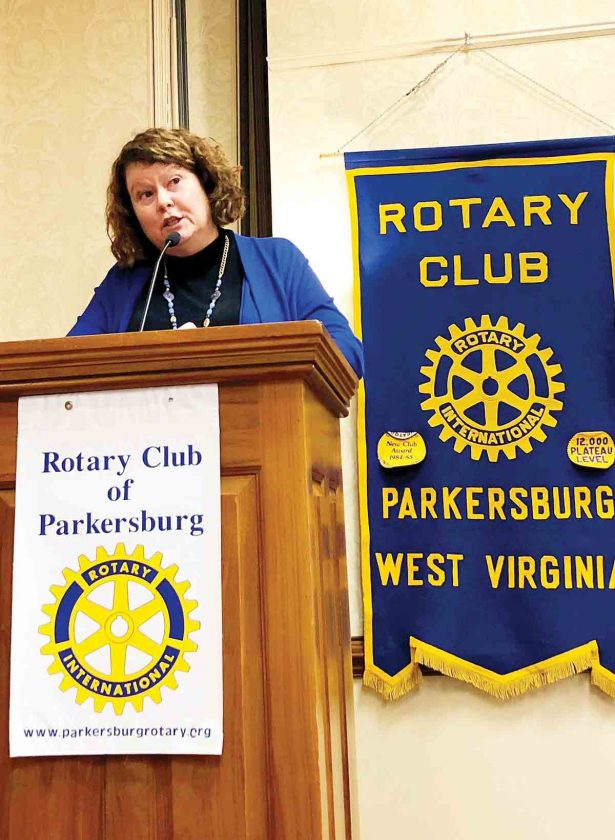 Diana Sole-Walko, president of MotionMasters of Charleston, speaks to the Parkersburg Rotary Club about the upcoming documentary “The Blennerhassetts” about Harman and Margaret Blennerhassett. (Photo Provided)

PARKERSBURG — A Charleston company is working on a documentary about Harman and Margaret Blennerhassett.

MotionMasters is raising funds for the project, to be called “The Blennerhassetts,” said Diana Sole-Walko, chief executive officer of the company. The documentary would be ready by next winter if all the money was in hand, otherwise it looks like it will be released in 2021, she said.

“We have to go out and raise the money for the production,” Sole-Walco said.

Harman met with Aaron Burr on the island where they allegedly conspired to commit treason. Burr was later acquitted and Harman was released from prison following the acquittal, but the Blennerhassett fortune and lot in life tanked after and they died in destitution.

The documentary will cover all facets of the Blennerhassetts’ life and times, including their lives on the island and their association with Burr, Sole-Walko said. The production company recently interviewed Nancy Isenberg, an historian who wrote a definitive book about Burr, for the documentary, Sole-Walko said.

“It’s really a documentary about the Blennerhassetts,” she said.

The style of the documentary will be much like the productions by Ken Burns, she said.

Other productions by MotionMasters include “Burning Springs,” a history of the oil and gas industry; “The Soul of the Senate,” about the late Sen. Robert C. Byrd; “Outlier,” about NASA mathematician and West Virginia native Katherine Johnson, and “Principled Man,” about the Rev. Leon Johnson.

The shows are available at Amazon.com and the MotionMasters website.

MotionMasters collaborated on “Burning Springs” with the late Dave McKain, a writer about the oil and gas industry and one of the founders of the Oil and Gas Museum in Parkersburg, Sole-Walko said.

“Our documentaries focus on interesting chapters and people in West Virginia,” she said.

The Convention and Visitors Bureau contributed $5,000, Executive Director Mark Lewis said. The bureau believes the region eventually will see a bump in visits with the release of the documentary, similar to the increase after the release of writer David McCullough’s book “The Pioneers.”

“I think it will stoke a lot of interest” in the Blennerhassetts and the island, he said.

Contributions are tax deductible and can be sent to the University of Charleston, office of the president, with specific notation that it be used for the documentary, Sole-Walko said.

While the documentaries are aired on West Virginia Public Broadcasting, Sole-Walko plans to have a premiere in Parkersburg at the Smoot Theatre and perhaps an outdoor showing on the island.

“We’re all very excited about being able to tell the story,” she said.