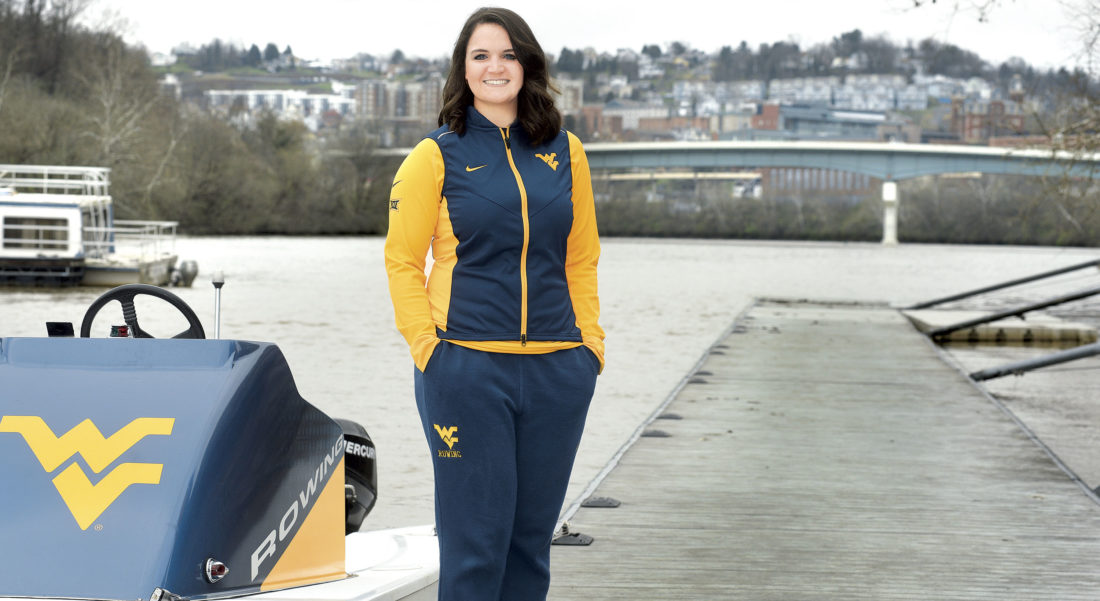 Photo by Jeff Baughan Sarah Williams, a junior on the West Virginia University women’s crew team, stands on a boat ramp where the Mountaineers launch onto the Monongahela River for practice.

Photo by Jeff Baughan Sarah Williams, a junior on the West Virginia University women’s crew team, stands on a boat ramp where the Mountaineers launch onto the Monongahela River for practice.

Photo courtesy of the West Virginia University Athletic Communications Sarah Williams, rowing in the second seat from right, competes as part of a women’s varsity eight team from the Big 12 Championships last year. The crew placed second in the third varsity eight competition.

Photo by Jeff Baughan Sarah Williams, a Ripley High School graduate, is a member of the West Virginia University women’s crew team and is a member of one of the varsity four-person rowing team.

MORGANTOWN — When Sarah Williams walked the halls of Ripley High School her senior year, she was a 1,000-point career scorer on the basketball team.

What she wasn’t, or even thought about being, was someone who would be spending her mornings rowing a shell boat on the Monongahela River for West Virginia University.

Ripley High didn’t have a river to row on, much less a crew team. But there is Williams, who has a spot on the West Virginia University varsity roster. A Division I athlete from a high school which didn’t offer the program.

And while the average West Virginia University student is turning over in their sleep at 6 a.m., Williams is walking a rowing shell to the Monongahela River for crew practice.

That means, she is out of her apartment and driving the winding streets in the 5:30ish, if not earlier, darkness of Morgantown. While students are slapping alarm clocks, the oars of the shell she rows are slapping the river waters. 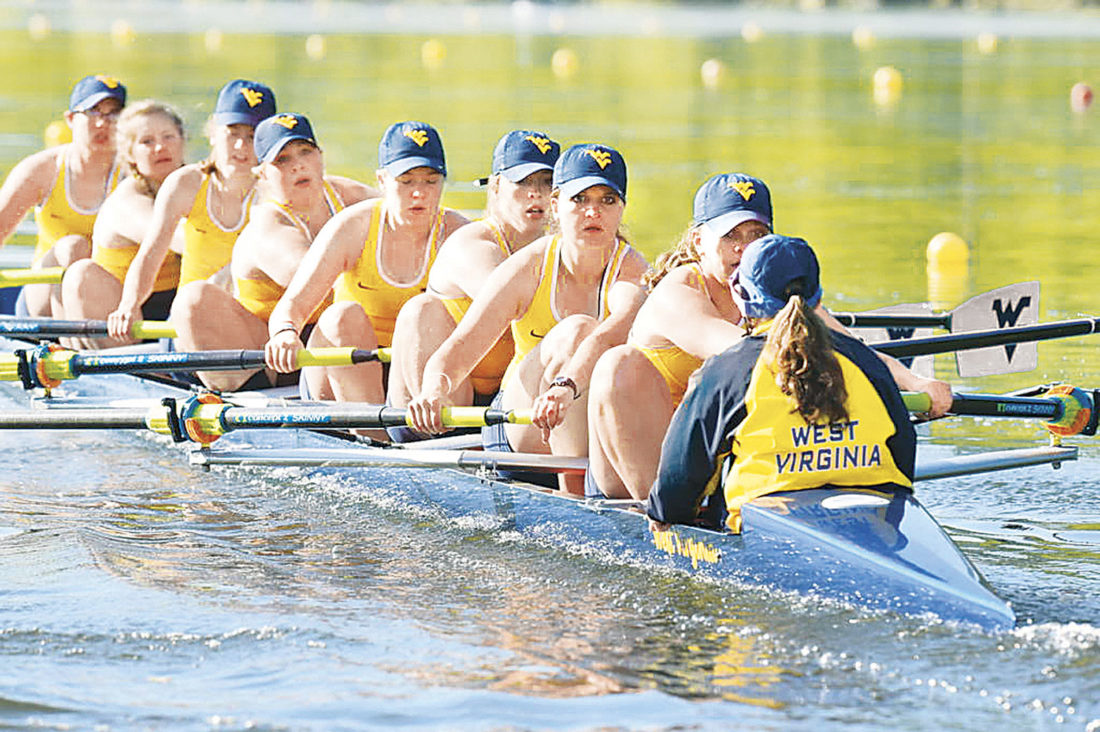 Photo courtesy of the West Virginia University Athletic Communications Sarah Williams, rowing in the second seat from right, competes as part of a women’s varsity eight team from the Big 12 Championships last year. The crew placed second in the third varsity eight competition.

Sunrise on the Monongahela is a sight she said is not soon forgotten. “It’s a magical sight to be on the river and see the sun come up,” she said. “We do more work by 8 a.m. than a lot of people do in a day. It’s you and the river.”

There are the things which remind you are not alone all the time. “No,” she said, “there are the river barges and the fishing boats which can get your day off to a bad start if one is not paying attention to the other. Fortunately, Coach (Jimmy) King is really good about watching the weather so everyone can see the other. Some of those foggy mornings, you don’t see those other boats.”

Recruiting crew is a different kind of beast in West Virginia altogether, according to Williams. “Parkersburg and South are the only two crew teams in the state,” she said. “But then-West Virginia University novice crew coach Amanda Merritt stopped by Ripley High to talk with the athletic director Steve Lough.” Merritt is in her first season as an assistant at Clemson University at this time.

“He called me and we talked,” she said. “I knew one of the coxswain, Courtney Caugh, from my freshman year. I tried out for the team in a semester where there is normally not a tryout. Most try out in the fall, I did in the spring semester. Feb. 15 made it a year for me in the program.”

Of the handful who did make the program as a walk-on last year — Williams didn’t remember the exact number — she is the last one with the program. Her efforts earned her “Most Improved Novice Rower,” after the first year. 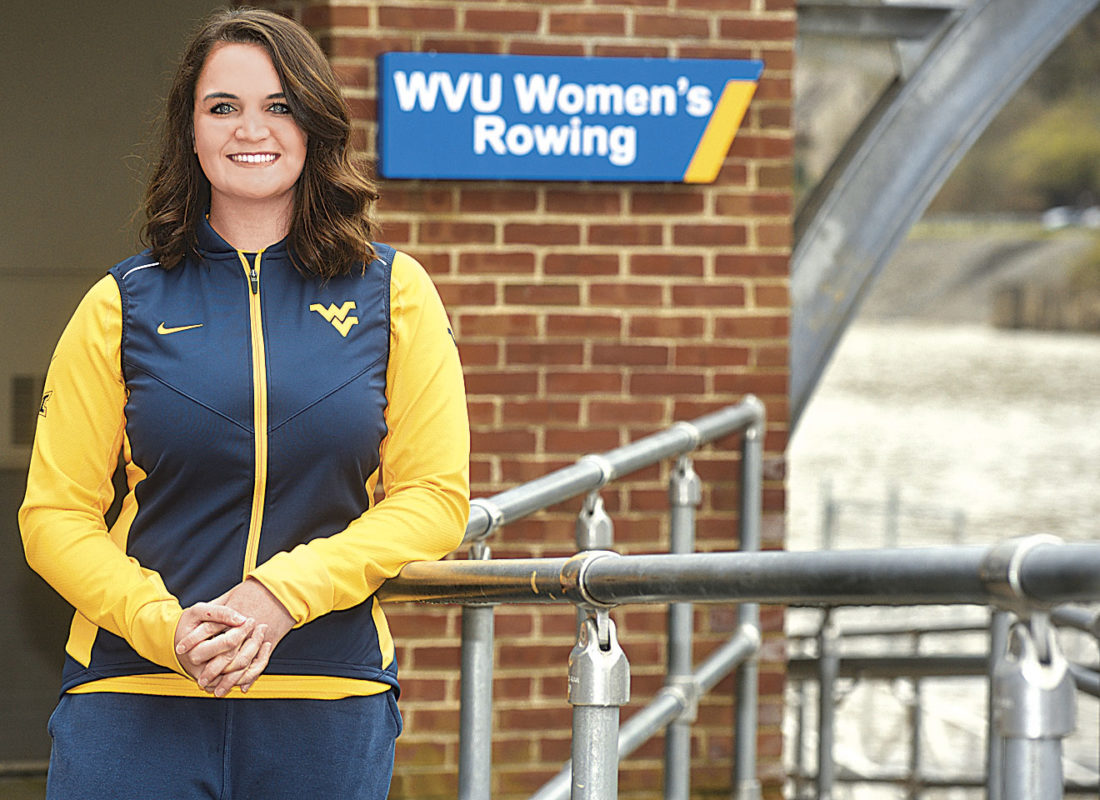 Photo by Jeff Baughan Sarah Williams, a Ripley High School graduate, is a member of the West Virginia University women’s crew team and is a member of one of the varsity four-person rowing team.

This year, as a junior, she has a seat on one of the varsity’s two four-person crews.

Williams, who is 5 feet 10 inches tall, said the crew team has girls who have rowed for years but also looks for girls who are athletes and are willing to learn the sport.

“A girl has to be very coachable and willing to push yourself athletically,” she said. “They’ll do the rest,” she added about her coaches. “They can teach a girl the proper rowing stroke. I’m very lucky. I never thought I would be doing this. But mentally and physically, this is the most challenging thing I’ve ever done.”

Practice is usually from 6 a.m. to 8:30 or 9 a.m. daily with weight training twice a week from 12:30-1:30 p.m. at Milan Puskar Stadium in the WVU football weight room. “The legs are predominant emphasis of the training,” she said. “It’s where the power comes from through the rest of the body. When you’re rowing, everyday is leg day.”

Williams said varsity races are 2,000 meters with a goal of breaking the eight-minute mark. For a girl to become race eligible for the Mountaineers, she must row on a sub-eight minute mark on an ergometer, or erg for short. It’s a device which measures the amount of work performed. 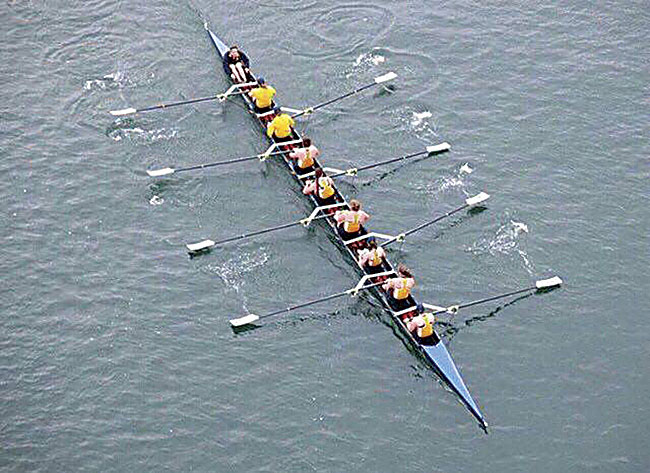 Her major is exercise physiology with an emphasis on aquatic therapy. She is working on a Spanish minor while holding down an overall 3.62 grade point average. She had a 3.76 GPA in the fall and during the summer will spend a month studying in Spain.

Bookwork comes before everything else with the program. “It’s a problem for me this semester,” she said. “I had to take classes for my junior year that were only offered at certain times. Those were in the mornings Tuesday and Thursday when I normally would be training.

“So Tuesdays and Thursdays I’m in class in the morning and make up my training in the afternoon. So you see, just about every minute has to be accounted for.”

Her spare time, when there is any, is spent with the Young Life Campus Christian Ministry, which is a national faith organization with a West Virginia University chapter.

“It’s an outreach ministry where we go to the students,” she said. “We go to where they are, we don’t make them come to us. It’s a relationship ministry. We invest in their lives and we earn the right to be heard by them. We share their joys, their hurts, their laughs and their tears.” 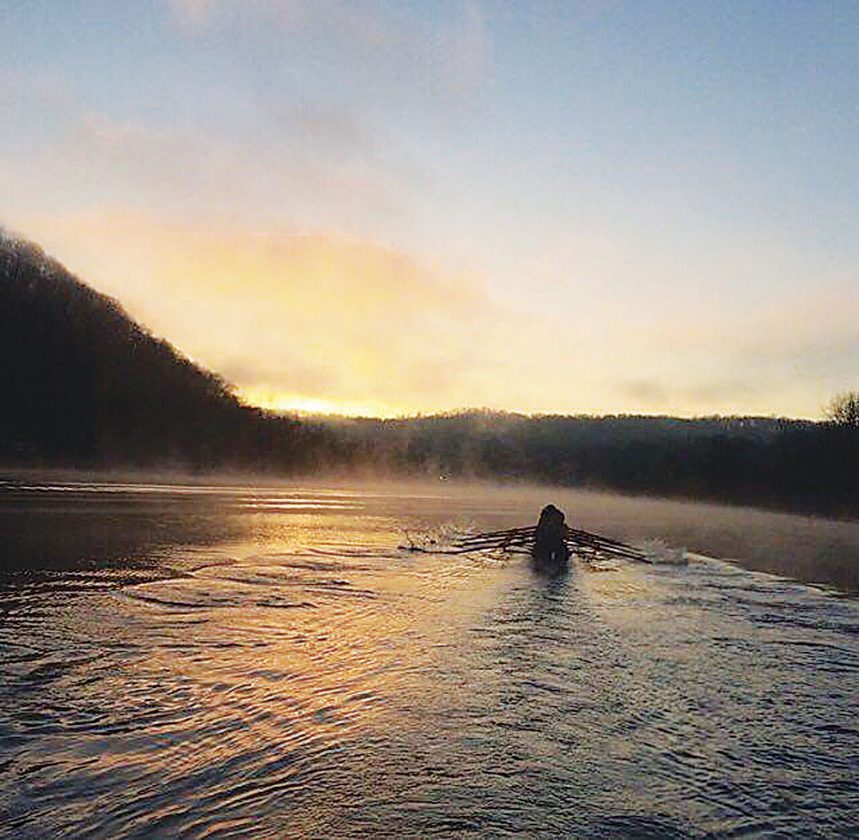 While she shares relationships with Young Life, the 50-so varsity team has itself for a social life many times as “rowing in Morgantown is not a fan-friendly sport. There are a few spots along the river where you might see us for 30 seconds or so and we do not have scheduled competitions in town,” she said.

“Most of our Big12 events are at Melton Hill Lake in Tennessee.” The lake is part of the Clinch River near Knoxville.

That’s the location of the Big 12 championships, although only four other schools in the conference have a crew team. Those are Kansas, Kansas State, Oklahoma and Texas. “Tennessee, Alabama and Old Dominion are affiliates. The winner gets an automatic bid to the NCAA championships. We still have some work to do; the program isn’t very old but we are gaining.”

Gaining, according to Williams, involves work and a lot of it. “Last year during our spring break camp we were on Lake Lure, N.C., going about 40K a day,” she said. “That’s almost 25 miles. Winter training this year was in Cocoa Beach, Fla., and we rowed some of the areas around Merritt Island near the Banana River, which is near Cape Canaveral.”

“I’m in the best cardio condition of my life. Hoops was never this hard,” she said. “Cardio training is important as rowing is intense. Every stroke counts. It’s all to make the boat faster. Mentally, it is a huge battle. You can have anywhere from three to seven other girls depending on you. Everyone has a role to play. You have to trust each other to eat right, sleep well and be academically eligible and do you individual workouts.

“You have to trust each other like we trust the coxswain,” she added. “She steers the boat because we can’t see where we’re going. We’re facing the opposite way from her,” Williams said.

“She sets the pace and she calls out the position of the other boats. She calls out the strokes and if one person is off, it throws the entire boat off and then the boat is not properly empowered to do its best. It’s trust. You do your best individually so the boat can be at its best for the betterment of the team. Everyone has a role. No one is unimportant,” she said.