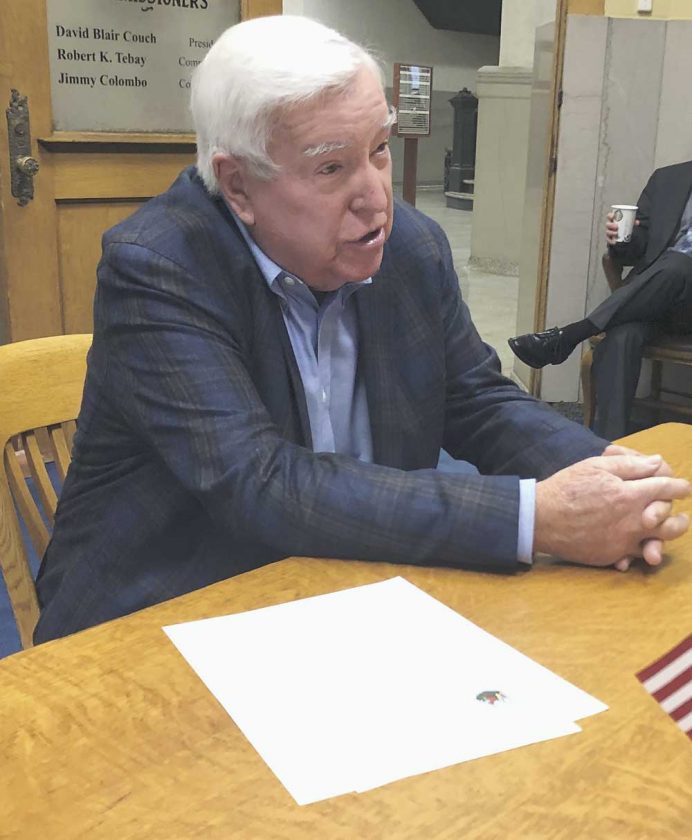 PARKERSBURG — The Menards store is on track to start construction in the spring of 2020, the developer of Emerson Commons told the Wood County Commission on Thursday.

Joseph Pope of Pope Properties updated the commission on the status of the development in the county’s first tax increment financing (TIF) district. The commission has been receiving questions about the development and wanted to hear from Pope about where things stood.

Pope said he has talked with officials from Menards about when construction could begin.

“They are anticipating starting in March,” Pope said.

Menards is a hardware, outdoors and home improvement chain of stores based in Wisconsin and has been building locations in the region, including Athens, Huntington and Clarksburg.

Pope has concerns about springtime weather and how that might play into construction, especially if it will be rainy at that point.

He said before they turned over the property they will erect signs near the interstate and along Emerson Avenue.

“That will complete our contract with Menards,” Pope said.

Once the property is turned over, he said, the company will build the store.

Pope’s company will have to put grass seed down on 2-3 acres to satisfy West Virginia Department of Environmental Protection requirements after drought conditions earlier this fall.

Menards has been looking at the Parkersburg area for a couple years.

“We hope to build a new Menards home improvement store in Parkersburg, W.Va., at some point in the future,” said Jeff Abbott, spokesperson for Menard Inc. in an e-mailed statement to the newspaper earlier this month. “We are still very early in the planning stages, therefore no official timeline has been established as to when construction might begin.”

Officials had hoped construction would have started by now but weather and other factors on site have delayed start of the work.

The TIF District covers 383 acres on both sides of Interstate 77 at its intersection with West Virginia 2 and encompasses the interchange. The project includes public improvements, including water and sewer extensions and road improvements, which would be paid for out of money generated from businesses on the property.

Pope has not signed any other businesses to build on the Emerson Commons property.

“We have several people talking,” he said. “Everybody is saying they want to see Menards break ground before they do anything.”

There is a 14-acre lot that Menards is planning to build a 250,000-square-foot building that is close to the interstate. There are a nine-acre site and a seven-acre site that could be built on and the possibility of more than 20 additional acres there that could be opened up for development.

Commission President Blair Couch said a traffic light has been installed near the main entrance to the development. Another entrance has been constructed farther down the road near a cement factory.

“As our first TIF project in Wood County we are excited to see it be successful,” he said.

Pope said he believes in the project and the benefits it can have for the area.

“I believe it will be successful,” he said. “I wouldn’t have done it if I didn’t think so.”

Representatives of the local trade unions also attended the hearing.

They said only certain contractors were invited to made bids to do the work on the Menards store being built in Athens.

“This biggest thing for us we want them to bring in the local people to do the work,” said Jessie King of Laborers Union Local 1085.

Mike Sigler of the International Brotherhood of Electrical Workers #968 said the Upper Ohio Valley Building and Trades Council in Steubenville, Ohio, sent letters to Menards to try to set up meetings to discuss contractors and see if any work could be generated for local contractors.

“They did not respond to their letter at all,” he said. Menards brought in workers from out of state to do masonry work and other jobs, Sigler said.

The trades representatives said they want to be able to competitively bid on any job they feel they could do in the area.

“We just want a spot at the table,” Sigler said. “(The electrician union) controls 70 percent of the market here. We feel like we deserve a shot to compete.”

Couch said any electricians that would be brought in from outside the state would have to be certified by the state of West Virginia through a test and licensed.

King said it is good that Menards and that development will bring in needed jobs to the area. They want to be a part of that.

“The jobs is the big thing,” he said.