Photo by Chad Adkins Greg Cottrill, director of Doddridge County Parks and Recreation, informs the Doddridge County Commission about updates made at the park with help of tax revenue from oil and gas exploration. 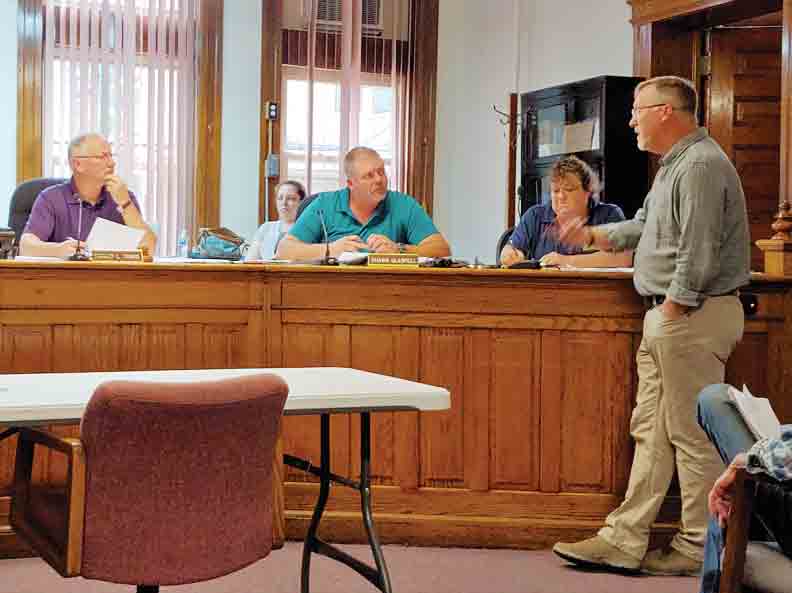 Photo by Chad Adkins Greg Cottrill, director of Doddridge County Parks and Recreation, informs the Doddridge County Commission about updates made at the park with help of tax revenue from oil and gas exploration.

WEST UNION — After an oil boom in the early 20th century ended in Doddridge County, job prospects and population dwindled as the decades passed.

In the early 21st century, a new oil and gas boom has righted the fiscal ship and given the county a chance to grow, but a handful of residents think the cost of prosperity is too high.

With over 2 billion cubic feet of natural gas being processed each day in the county, tax revenues have soared, offering the local government an opportunity to better the community through new civic and infrastructure projects.

However, after multiple violations by the energy companies in the county and a West Virginia Supreme Court ruling in favor of landowners, a toll is being taken on the trust between companies and residents. 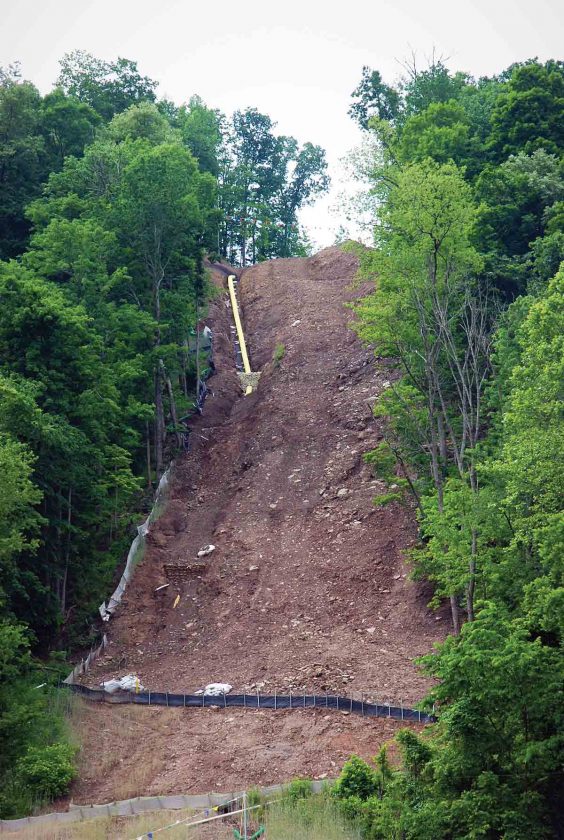 “I was a commissioner for 12 years 14 years ago,” he said. “We had trouble even making payroll back then.”

The 2009 budget in Doddridge County was almost $3 million. It has increased over 500 percent since then, giving the county just over $15 million for 2019.

Commissioners said they have bettered the lives of the residents.

Jennifer Wilt, executive director of the Doddridge County Economic Development Authority, said the commission has played a vital role in the expansion of water service to more people in the county. With almost 80 percent of the estimated 8,400 county residents using private water wells, Wilt said the commission has committed significant funds to get more people into the Doddridge County Public Service District.

One water line project has been completed. Two are planned to be completed by the summer of 2020 and another is in the engineering phase, Wilt said.

More than $2.2 million dollars contributed by the county along with $3 million in grants will provide over 210 homes with new access to the district’s water system, she said.

“We are very fortunate and thankful for all their help,” Wilt said.

But Antero Resources, one of the more prominent energy companies in the county, has paid restitution for violations of the Clean Water Act in Doddridge County.

In February, the company agreed to a settlement of $3.15 million with the Department of Justice and the West Virginia Department of Environmental Protection for the unlawful dumping of rock, dirt and sand in creeks and streams in Doddridge, Harrison and Tyler counties. The settlement also pays for damages from the destruction of wetlands during construction of drill pads.

The agreement between the company and the government required Antero to reclaim and clean up 32 affected sites, which the Environmental Protection Agency estimated will cost $8 million.

Alvyan Schopp, chief administrative officer and regional senior vice president of Appalachia for Antero Resources, said the settlement stems from 2011 when the company expert said the procedures they were using were adequate. After an inspection three months later in June by the EPA, Schopp said his company learned it was not in regulation.

The company immediately told the EPA it had been using the incorrect procedures the whole time, Schopp said.

“We gave full disclosure,” he said. “We were 100 percent self reporting.”

Besides fixing the mistakes, the company has donated time and resources to communities to make them better places, Schopp said.

“We’ve been rebuilding (West Union City Park) from the ground up,” he said.

The company has repaved the parking lots and basketball courts and built a structure where weekly farmers markets are held, Schopp said.

Similar efforts also have been made at Wetzel County parks, he said. The company holds two major fundraisers every year for charities in the state, Schopp said.

The company’s Kentucky Derby Party and Dodge Ball Tournament raised over $150,000 this year alone, he said.

Mirijana Smith, a resident of Doddridge County and member of the Doddridge County Watershed Association, looked out across the brown water of Middle Island Creek near West Union and shook her head.

“It never used to look like this,” she said.

Smith said the main water source for West Union was almost clear before the energy companies moved into the county dumping silt and other pollutants into Middle Island Creek. As the collection point for the majority of tributaries in the county, the largest creek in the state spills into the Ohio River after it flows through Tyler County.

“All this stuff that comes into the creek will affect more than just the people in Doddridge County,” Smith said.

Another concern of Smith is the MarkWest Sherwood Complex being located near public areas and what she thinks is a decrease in air quality associated with the plant.

According to a February article on wvnews.com, the facility pulls different elements from the 2.2 billion cubic feet of natural gas processed at the facility every day to produce a variety of petroleum products. The EPA has justified some of Smith’s concerns by finding that the facility was in violation of emission standards three times over the last five years.

The largest penalty of $250,000 stemmed from the Mobil Petroleum Corp. subsidiary’s 2016 release of unlawful amounts of sulfur dioxide, nitrogen oxides, carbon monoxide and formaldehyde into the air.

“As the crow flies (the MarkWest Sherwood Complex) is only a half mile from the middle and elementary schools and the county park,” she said.

The Marathon Petroleum Corp. failed to respond to questions about the three fines from the EPA.

But the neighbors of the complex also have seen improvements to facilities and services because of the tax income the county derives from companies like Mobil and the MarkWest Sherwood Complex that do business in Doddridge County.

Adam Cheeseman, superintendent of Doddridge County Schools said the funds brought into his district from the oil and gas industry will change the school system for generations to come.

“Putting the money back into the kids is the secret to success,” he said. “We are investing in projects that will be around for the long haul.”

Cheeseman said the projects include putting science, technology, engineering and math (S.T.E.M.) labs in each of the three schools in the county, building a new Pre-K school and providing career training for students who are on a path toward a trade versus higher education.

“We’re putting 21st century tools in our teachers’ and students’ hands,” he said.

Even though education has been a top priority of the board of education and residents, Cheeseman said a significant focus is improving athletic facilities in the school system, too.

A new sports facility with a $12.8 million price tag will be completed and ready to use at the start of the 2019 school year. Located next to the Doddridge County High School, it includes a second auxiliary gym, student activity center, a multi-purpose facility for academic and athletic events and putting turf on the softball field, Cheeseman said.

He also said the new football stadium will have an eight-lane running track and office space for the board of education.

“It’s a good time for Doddridge County,” he said. “We are truly blessed.”

The county park also has seen major upgrades in recent years due to the increase of tax revenue from the oil and gas industry.

Greg Cottrill, director of Doddridge County Parks and Recreation, said a $1.1 million campground and a disc golf course have been added to the county park for the 2019 summer and fall season. He said the new amenities join the county’s pool, playground and hiking trails to include EQT’s educational trail at the park.

While EQT Corp. said its philanthropy includes sponsorship of the county educational trail, some residents of Doddridge County have felt slighted by the company’s business acumen.

On June 5, the West Virginia Supreme Court ruled against EQT in favor of Margaret Beth Crowder and David Wentz. The case accused EQT of violating the original mineral lease made before the once-married couple bought the surface rights of the land they live on in Doddridge County.

EQT expanded the operation on the pair’s property to start horizontal drilling into adjoining claims to exploit the gas reserves there. The pair argued the original lease only allowed vertical drilling into the minerals directly below the property.

The suit claimed that the expansion of the well site, which included the clearing of an additional 42 acres of land, building of multiple two-lane roads and construction of a 19.7-acre well pad, was not allowed under the original lease.

The courts agreed with Crowder and Wentz and ordered EQT to pay $190,000 to them for damages to the property. In a statement, EQT said they won’t fight the decision.

“EQT has always worked with landowners to prevent potential issues or disagreements, including through the use of surface agreements to compensate surface owners on the impact of our operations,” the statement read. “While we are disappointed in the court’s ruling, we don’t expect the decision to have a significant impact on our operations in West Virginia. We intend to maintain cooperative and mutually beneficial relationships with our customers, our partners, and residents in the regions where we do business.”

Means said he understands the concerns from the community about the potential hazards posed by the oil and gas industry, but feels the risks are necessary for Doddridge County to grow and thrive.

“Anytime you have progress, you’re going to have more problems,” he said.