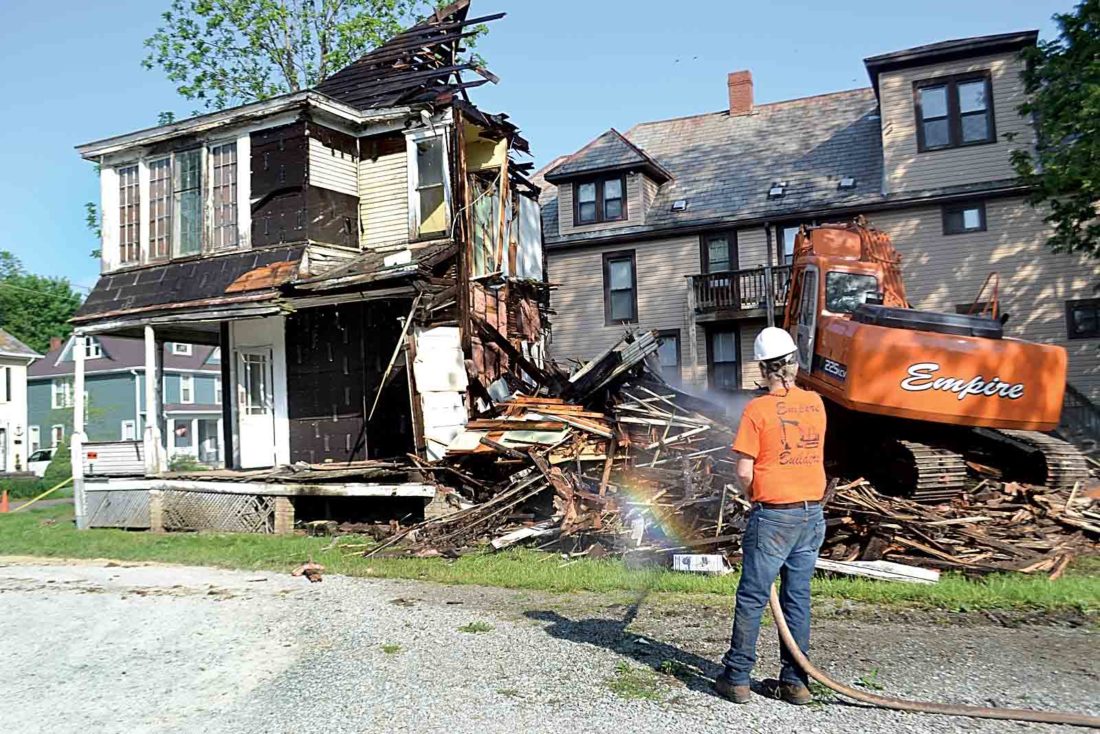 MARIETTA — Smitty’s Pizza plans to someday use the lot where a house stood after completing the demolition of 506 Front St. in Marietta Thursday.

“I don’t have any current plans as of right now but to just get the property cleaned up,” said Smitty’s owner Juanita Lannigan, 69, of Reno. “Any ideas for the property are kind of on the table right now with nothing set in stone.”

Ken Strahler, president of Ken Strahler Masonry in Marietta, was responsible for tearing down the house, which had been on the city’s blighted house concerns list. He said the entire lot, weather permitting, should be cleared as soon as this evening.

“We took the chimneys down this morning. There were four that had to be taken care of before we could get the bulldozer running,” said Strahler Thursday. “We salvaged what we could, being the slate and the front steps of the porch, but that house has been empty for years.”

According to Strahler, the house at 506 Front St. had not been occupied for 16 years. The previous owner, Lawrence Albrecht, had approached Lannigan to say he wanted to sell the house.

“We owned that house for years and all I did was mow it,” said Albrecht.

Lannigan purchased the house for $30,000 on April 17, according to the Washington County Auditor’s Office. The house and property were initially appraised for $50,490.

The 40-by-90 foot lot runs adjacent to the current Smitty’s business after another house at 504 Front St. was demolished in July 2015. That property has since been turned into more parking for the pizzeria.

“It was collapsing on the Smitty’s side and has been for years,” he said. “It’s been a fire risk and this was the best outcome for it.”

Strahler said the roof had been leaking for quite some time, creating a musty smell when the bulldozer ripped through the top roof. Workers with Ken Strahler Masonry got a permit to use the fire hydrant across the road from the property to spray as they demolished to keep the dust at a minimum.

Because the house hasn’t been occupied for so long, the sewage lines have been shut off for years. After the final debris is cleared, Strahler’s crew will seal the connection to the city’s sewage system.

“We rented a rather large dumpster to haul the debris away across the river into Wood County,” he said. “There’s a landfill out on Route 50 that we take it all to.”

Neighbors said they are glad to see the old house leave the neighborhood. Russel Scheiber, 70, of 515 Front St., said his view will improve now.

“It was quite the eyesore,” he said. “I hope that they keep that lot green. Maybe plant some trees and put some seating out there where those eating at Smitty’s could eat their food or just enjoy being outside. I hope another parking lot doesn’t go in there but I’ll be anxious to see what happens next.”