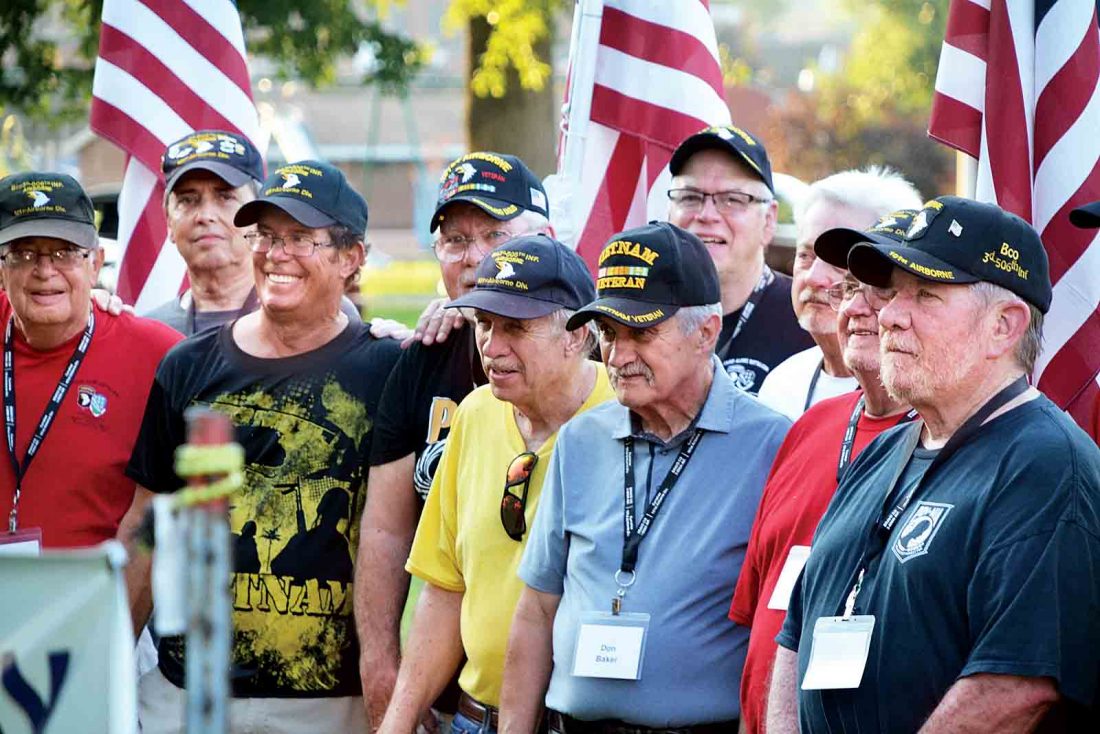 Bravo company members stand for a photo Friday night at Tomlinson Park in Williamstown. Behind them are 18 flags, one for each of their brothers-in-arms who didn’t come back from the Vietnam War. The company, which now is an extended family of more than 100 people, held a picnic gathering in Tomlinson Park Friday night. The reunion activities will continue through the weekend. (Photo by Michael Kelly)

WILLIAMSTOWN — They met in their youth, and their shared experiences were shivering in monsoon rains, fending off insects and snakes in the jungle and being shot at. They came home, one or a few at time as the Army let them go, to disdain and misunderstanding, dogged by uneasiness and grim recollections.

But one resource the Bravo Company had, they discovered decades later, was each other.

On Friday night, the Bravo Company family, now grown to more than 120 people, gathered in Tomlinson Park in Williamstown to mark 50 years since the first of them landed in Vietnam. The Bravo veterans themselves are now in their late 60s or early 70s, and the company’s extended reach now includes their own children and grandchildren, the families of fallen brothers and a few veterans from other units.

Music from the 1970s – the Beach Boys, Procol Harum, the Zombies – drifted out from the big picnic shelter at the park as the men — for the most part robust and white-haired — and women talked quietly and occasionally laughed while a few children played and the smell of grilled food wafted through the pavilion.

“This is one of the few situations where I’ll sit with my back exposed,” Rick Clanton said. Seated at one of the picnic tables, relaxed with his back to the open park, Clanton recalled the reassembly of Bravo Company. 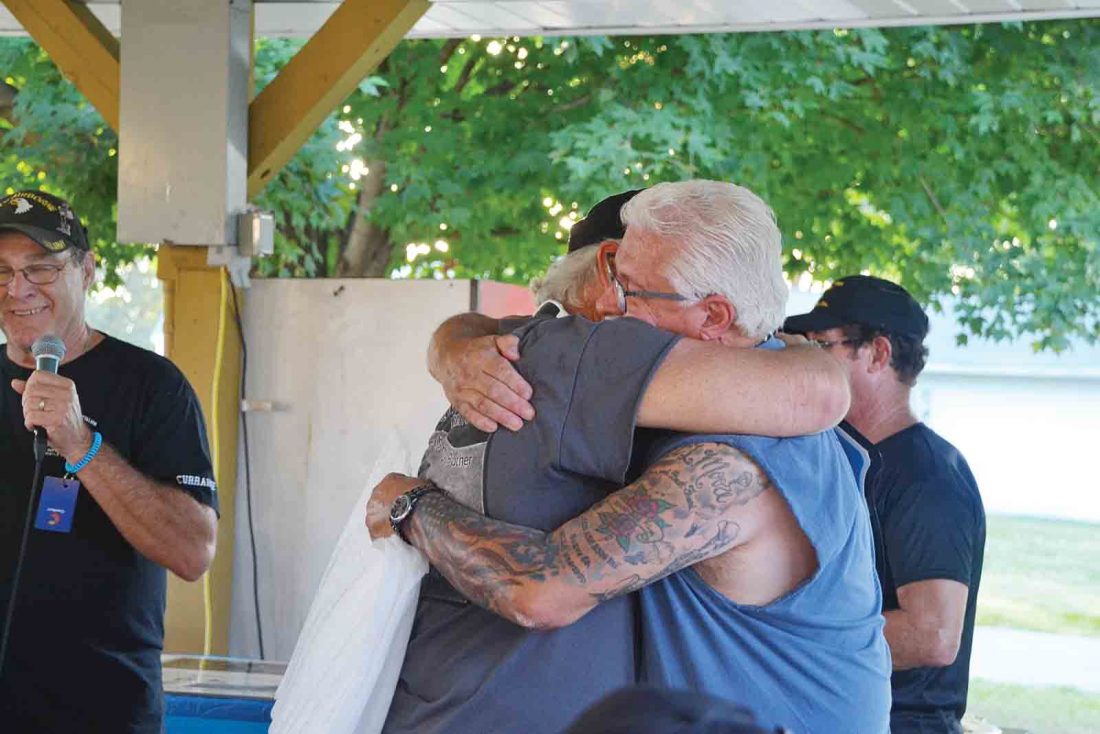 “After we came back, I started having what’s now called PTSD, and it seemed like the only people I could talk to about were the people I served with. I wrote a lot of letters, made a lot of phone calls, used the internet, and I found them here and there. The first time we gathered was at The Wall (the Vietnam Memorial) in 2003,” he said. “We hadn’t seen each other for more than 30 years, but we just meshed right away.”

The effort broadened to find the families of Bravo Company soldiers killed in action.

“They lost a loved one but they really had no closure,” he said. “We wanted to show them that when their loved ones died, they were surrounded by people who loved them.”

It’s been a healing process for everyone, he said.

“It helps our own loved ones understand why we are the way we are,” he said. 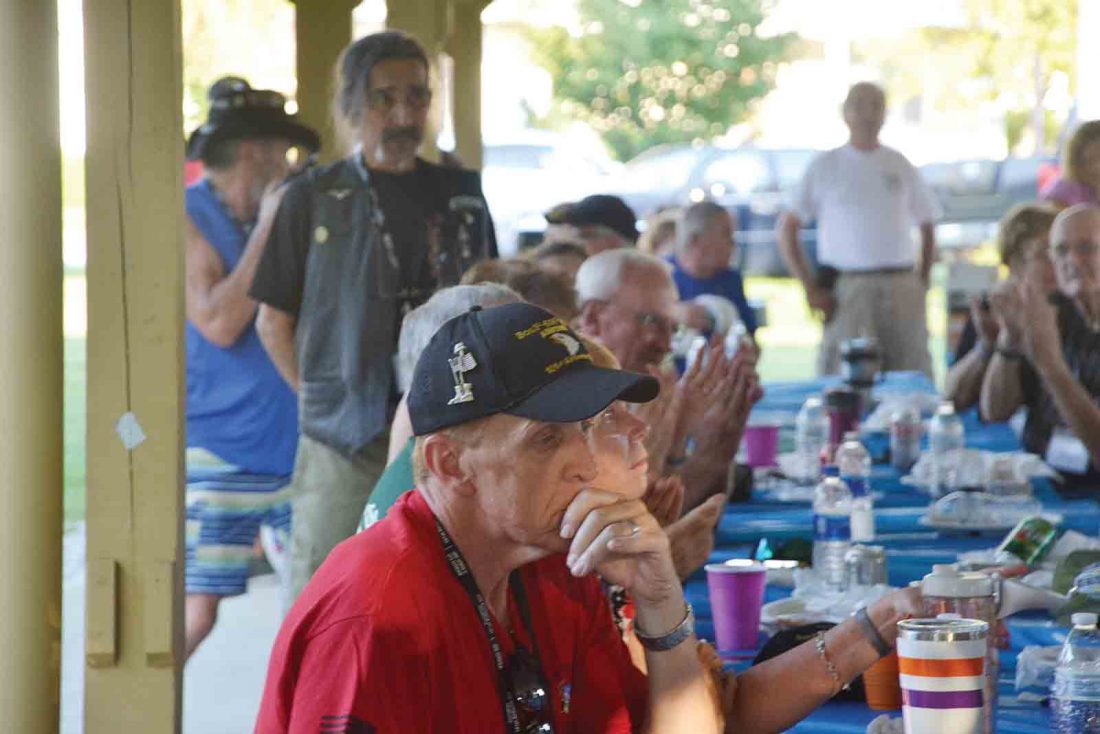 Pam Bennett, a teacher at Marietta High School, attended the event. Her history courses include studying the Vietnam War, and on Friday morning three of the veterans came to the class.

“The kids had good questions, and they were hearing the answers straight from the people who lived it,” she said. “That’s the closest we can get to reality, the best we can do.”

Capt. Jim Waybright, who now lives in Williamstown and in his retirement occasionally comes in as a substitute teacher at Marietta High School, was the Bravo Company leader. As he does at each reunion, he quietly read the names of the 18 men in the unit who died in the war, ringing a bell as each name was read out. The men of the unit assembled to have their photo taken against the backdrop of 18 flags.

In the past four months, four more of their group have died.

Bruce Dancesia, who lives in New York, was one of the three veterans who spoke to the high school class.

“I was glad to do it, the kids had fantastic questions, and some of their eyes opened pretty wide at the answers,” he said. “We’re getting to be like the World War II veterans, we have to tell our story.”

Dennis Patterson was on the crew of a helicopter gunship, and he’s one of the outsiders who was invited to joined the Bravo Company family.

Patterson, now living in Vero Beach, Fla., said he was a fire team leader on the gunship one day in Viet Nam called in to protect a medevac helicopter coming in to pick up wounded.

“I saw the muzzle flashes as he descended, and we took out some guns on the hill. Another helicopter came in, and they were firing from some boulders and we couldn’t get at them,” he said.

Finally, low on fuel and out of ammunition, the gunship lowered onto the bomb crater where the wounded man lay, pulled him on board and got him out.

“One day in 2010, the phone rang, and somebody said, ‘Are you Dennis Patterson? I’m Jack Brickey, and you saved my life in Vietnam,'” Patterson said. That was his introduction to the Bravo Company family. Brickey, who now lives in Michigan, was there Friday night.

“My first one was 10 years ago, and after than I’ve been to every one. It’s an epic experience,” he said. These people, they know you.”

The family’s accomplishments have been extraordinary, bringing comfort to families of the fallen, reuniting friends, and, through comradeship available nowhere else, offering a unique peace of mind to the troubled warriors.

“All Rick (Clanton) wanted to do was find a few friends,” one gray-haired soldier told the group, then swept his arm to take in the gathering. “And now, look at this.”

1 dead, two arrested in shooting this morning at WVU in Morgantown