Wood BOE: Five schools will be recommended for closure

High school students in the iBelieve program held at Marietta College on Tuesday participate in a communication exercise – assembling a jigsaw puzzle as team with only one member permitted to speak. More than 50 students from a four-county area came to the day-long series of sessions intended to build skills in trust and team building, communication, leadership and ethics. (Photo by Michael Kelly)

Parkersburg City Councilman Eric Barber, right, speaks during discussion of an ordinance regulating motorized bicycles at Tuesday’s council meeting as Councilman Bob Mercer listens. An amendment to the ordinance was approved, meaning it will come back to council for a fourth, and potentially final, reading on May 28. (Photo by Evan Bevins)

From left, Fraternal Order of Police President Beniah Depue and Secretary of State Mac Warner place wreaths at the police memorial in front of the Parkersburg Municipal Building on Tuesday in the annual National Police Week observation. (Photo by Jess Mancini)

Haley Board, center, receives the Penny McLain Half Unit of the Year Award from Secretary of State Mac Warner, left, and Fraternal Order of Police President Beniah Depue on Tuesday. (Photo by Jess Mancini)

Rick Modesitt, left, a former police chief, receives a special recognition for his service to the state Committee on Crime and Corrections from Secretary Jeff Sandy of the West Virginia Department of Military Affairs and Public Safety on Tuesday during Police Week ceremonies. (Photo by Jess Mancini)

Wood County Board of Education member Justin Raber speaks during Tuesday’s school board meeting. Members questioned why two schools which were marked for closure in Wood County Schools’ 2010-20 Comprehensive Education Facilities Plan were not closed. The school system will look at closing five schools in the next 18 months. (Photo by Michael Erb) 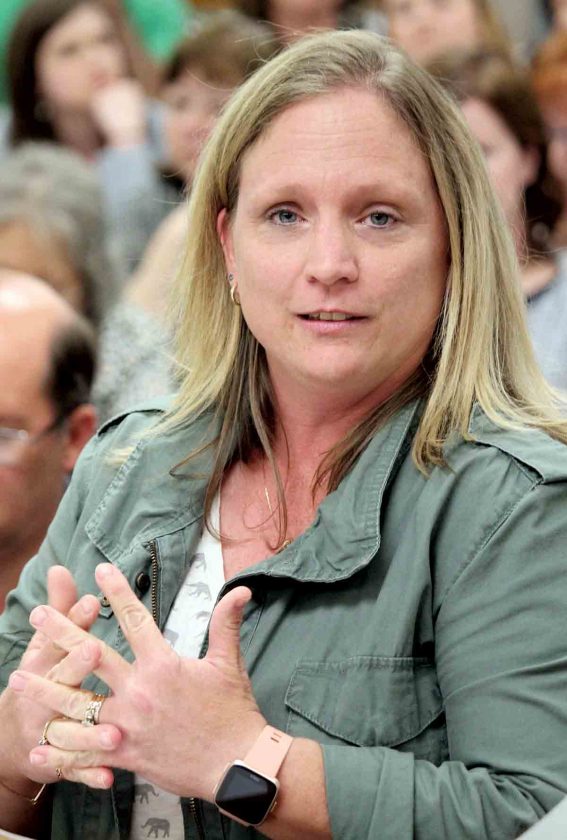 PARKERSBURG — Wood County Schools Superintendent Will Hosaflook said he will recommend closing at least five schools to keep the district from exhausting its savings by the end of 2020.

No formal vote was taken at Tuesday’s Wood County Board of Education meeting, but board members directed Hosaflook to continue to gather data to bring them a plan for consolidation.

Officials Tuesday said no specific schools have yet been chosen, but reiterated two schools — Worthington and Waverly elementary schools — have previously been marked for closure. Board President Rick Olcott said three other schools also are being considered: McKinley Elementary School, which is more than 100 years old; Franklin Elementary Center, a portion of which is closed to students due to structural issues; and Van Devender Middle School. Officials said decreased enrollment at Vandy, Hamilton and Jackson middle schools has led to those facilities being significantly under capacity, which would allow for the three schools to be reduced to two.

The current Comprehensive Education Facilities Plan, which governs growth and facility projects for a 10-year period, will expire in 2020. A new CEFP is in the works. 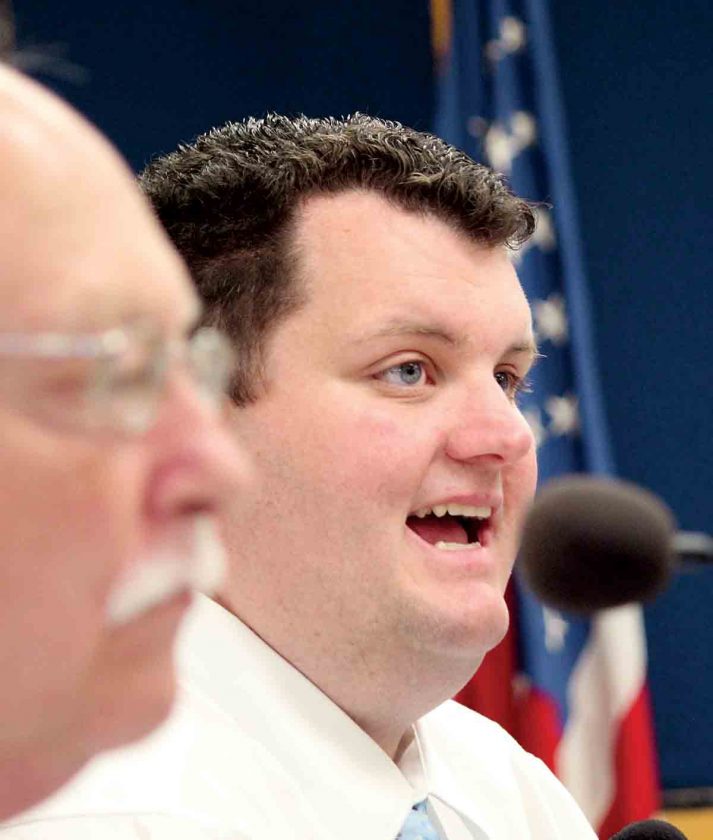 Wood County Board of Education member Justin Raber speaks during Tuesday’s school board meeting. Members questioned why two schools which were marked for closure in Wood County Schools’ 2010-20 Comprehensive Education Facilities Plan were not closed. The school system will look at closing five schools in the next 18 months. (Photo by Michael Erb)

“That is not the case,” Hosaflook said. Wood County Schools current enrollment is 12,138.

That loss of enrollment has meant a decline in state per-pupil funding, but the number of employees has remained relatively unchanged because of the number of facilities, meaning more local funds have been used to pay for positions.

Officials say the school system will use more than $4 million in savings during the 2019-20 school year and will exhaust its savings midway through the 2020-21 school year if no action is taken.

Hosaflook said the district’s newest school, Martin Elementary School, was built in 1985, and the majority of schools were built in the 1950s and 1960s. Two recent energy audits of the district’s 28 facilities show the school system facing a deferred maintenance cost of about $75 million.

“If we don’t take drastic measures, we are not being fiscally responsible,” Hosaflook said.

Worthington “was supposed to close in 2012. We had the hearings,” he said. “It didn’t close. I was involved with this CEFP, and we didn’t implement it.”

Hosaflook said Waverly was included in the district’s bond call to create a new Williamstown-Waverly area elementary school. Community members objected, saying the bond did not specify closing Waverly Elementary, and the school board at the time voted to keep the school open.

However, Hosaflook said leading up to the bond vote, officials consistently talked about closing and consolidating Waverly and Williamstown elementary schools, and in 2016 the school board modified the CEFP to include the closing of Waverly.

“Why didn’t we follow the CEFP?” Hosaflook said. “It’s a guiding document. There’s no use doing it if we’re not going to follow it.”

“Over the past 10 years, this plan has projected we were going to stay steady, but the opposite has happened,” said board member Justin Raber. “We’re losing students, we’re losing funding, and we have to make changes because someone a decade ago missed the mark.

Parent Erin Butterfield spoke on behalf of Worthington Elementary School, saying the community was “blindsided” by a recent announcement the school would be closed and asked why it was being targeted for closure.

“We felt we deserved some sort of explanation, a timeline or plan on how it’s happening,” she said. “It will affect a lot of people, especially our kids.”

Butterfield said parents want to be a part of the discussion.

“We obviously have a lot of concerns,” she said. “We would love to be a part of this decision.”

Olcott said any schools which are recommended for consolidation will have public hearings, “even if they already have before.”

In other business, the school board unanimously approved a three-day unpaid suspension for employee Ronald James. The vote came after a short executive session, and no discussion was held in open session. No other details were made public.