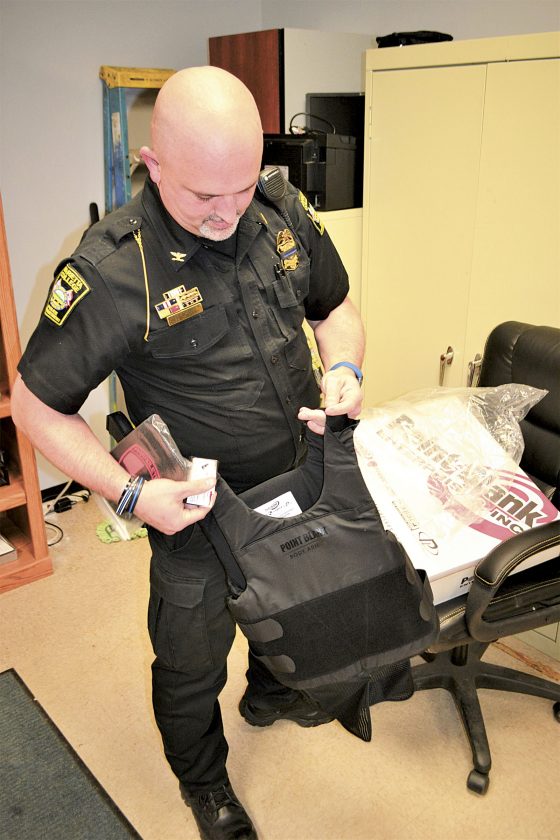 Photo by Chad Plauche-Adkins Marietta College Police Chief James Weaver III displays a new bulletproof vest he received earlier in the week on Friday at Marietta College. It was purchased with grant money from the Ohio Attorney General’s Office.

In April, Ohio Attorney General Dave Yost said in a statement that the money used to purchase the vests was a wise investment for the state.

“Seeing that these grants are being used in every corner of our state helps me rest easier at night knowing that our peace officers are better equipped to return home safely to their loved ones at the conclusion of each shift,” Yost said.

Black said the exterior armor is stronger than the soft vests worn traditionally by deputies under their uniforms. He said since his tactical team is tasked to face the most violent of criminals in his county, they were the recipients of Yost’s investment.

Black said the vests have a life-span of five years before needing to be replaced, and his tactical teams vests only had a year left on their service. With military and other law enforcement agencies always ordering the vests, he said he had to plan ahead and order the new vests before the old ones expired.

“Sometimes it takes a long time to get your ordered gear in,” he said.

With Marietta College Police Department’s vests ending their service life in July, Chief James Weaver III said the $7,757 in grant money for new vests came in at just the right time. He said his officers receive a psychological boost knowing they have the vests to help protect them from injury.

“Just wearing a badge and a uniform makes you a target at times,” he said.

He said his department ordered the soft vests that are worn under the uniform, but also ordered speed plates that can be inserted into the vests that make them stronger. The plates are made from 100 percent polyethylene and can stop a .30 caliber round traveling at 2,030 feet per second.

“You would end up with a few broken ribs, but it’s better than the alternative,” Weaver said.

He said the money in his budget that would have been used to purchase the nine new vests can now be used for training his officers to better interact with the people they protect.

“People deserve the most professional officers possible,” he said.

* Area law enforcement agencies are beginning to receive new body armor that was paid for with a grant from the Ohio Attorney General’s Office.