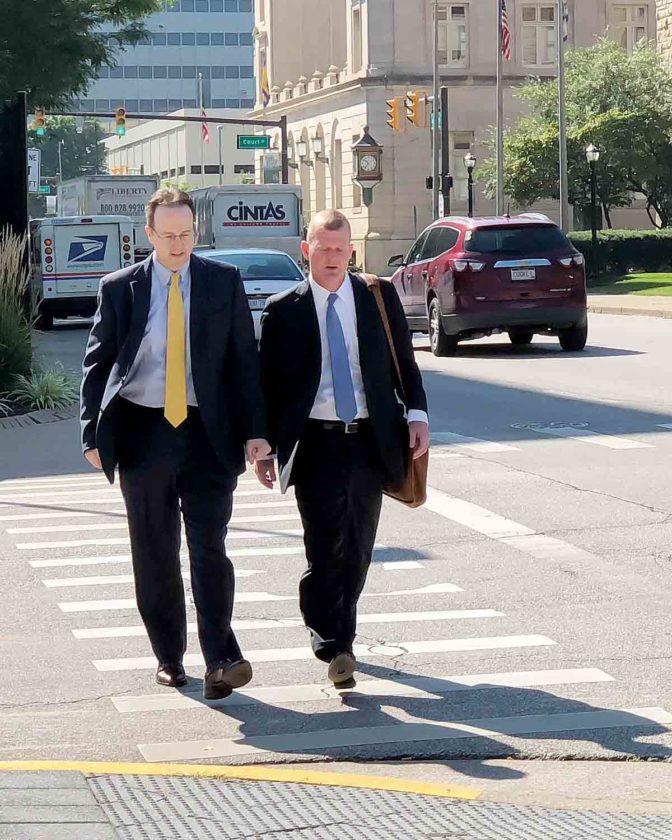 CHARLESTON — A justice of the West Virginia Supreme Court of Appeals has resigned, another is suspended, but both had dates with a federal judge on Thursday.

Ketchum, who resigned July 27, went before Judge John Copenhaver for a plea hearing after agreeing to plead guilty to one felony count of wire fraud. The plea deal was announced July 31 by Mike Stuart, U.S. Attorney for the Southern District of West Virginia.

Copenhaver asked Ketchum several times if he was sure about his plea before accepting it. Ketchum admitted to the wire fraud charge.

“Your honor, with regard to the charge, I took a state vehicle to Virginia in violation of the law,” Ketchum said.

According to the announcement from Stuart, Ketchum is accused of using state-owned vehicles and fuel cards to drive to the Old Farm Golf Club in Bristol, Va., for personal trips. If convicted, Ketchum could face a penalty of up to 20 years in prison and up to a $250,000 fine.

Stuart’s office charged Ketchum in a federal information instead of an indictment, meaning that Ketchum was cooperating with federal investigators as they continue to look at the state Supreme Court.

“The court finds there is a factual basis for the plea,” Copenhaver said. “You stand convicted.”

Ketchum was released on a $100,000 unsecured bond. He will return to court 1:30 p.m. Dec. 6 for sentencing. He was represented by attorney James Cagle. Assistant U.S. Attorney Anna Forbes represented the government.

According to an investigation by the Legislative Auditor’s Office, Ketchum frequently used a state car to commute back and forth between Charleston and his home in Huntington. The reports noted that Ketchum reimbursed the state and amended his tax forms when the issues were brought to his attention and federal investigators also noted Ketchum’s honesty.

Ketchum, a Wayne County native, would have been up for re-election for a second 12-year term in 2020 before his resignation. Gov. Jim Justice is in the process of appointing a replacement, who will serve until voters select one of 11 candidates to fill the remainder of the term in a special election on Nov. 6.

Also in court Thursday morning, Loughry was arraigned for a third time since June. In the new superseding indictment, Loughry is charged with two counts of wire fraud. He now faces 25 counts, including obstruction of justice, witness tampering, lying to federal investigators multiple charges of wire and mail fraud. That’s up from 22 counts in June.

Loughry was impeached Aug. 13 by the House of Delegates. The House adopted seven articles of impeachment against Loughry, ranging from spending over $363,000 on renovations and furnishings, taking furniture belonging to the court to his home, circumventing state code by overpaying senior status judges, using state vehicles and fuel cards for his personal benefit, misusing state computers for use by his wife and son and lying under oath to the House Finance Committee.

Loughry also faces a 32-count complaint by the state Judicial Investigation Commission. He was suspended without pay by Supreme Court pending resolution of his case.

Other impeached justices facing trial in the West Virginia Senate include Chief Justice Margaret Workman and Justice Beth Walker. A pre-trial hearing is set for Sept. 11 in the Senate chamber.