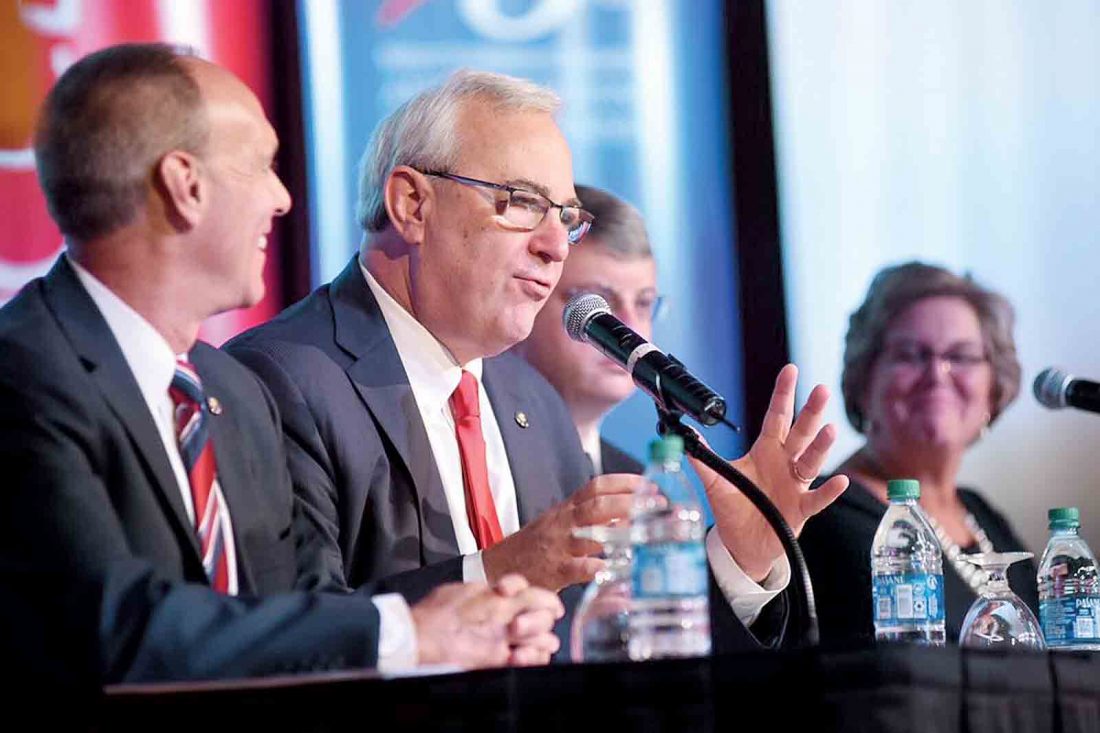 WHITE SULPHUR SPRINGS — Leaders representing the Republican majority of the West Virginia Senate and House of Delegates told business leaders from around the state Friday that 2020 is the year they try to remove the business and inventory tax.

An attempt to remove the business and inventory tax requirement from the state Constitution was made during the 2019 legislative session that ended in March. House Joint Resolution 17 made it out of the House Finance Committee Jan. 24, but was never taken up by the House Judiciary Committee and died.

Summers said it was important to try again.

“We are still picking winners and losers on occasion because we are not there yet on establishing a business environment that works for every single person,” Summers said. “We are committed to looking at doing some tax reform on removing the machinery equipment and inventory tax.”

The business and inventory tax is estimated to bring around $400 million annually, with county governments and school systems benefiting from the tax. Businesses consider the tax onerous, with no surrounding states offering a similar tax and causing some businesses to leave their heavy machinery outside the state unless needed.

“The personal property tax on business inventory and equipment is the single biggest job killing tax in our state,” Carmichael said.

“It’s not something that we can just get 51 votes in the House and 18 in the Senate and pass a bill that does it,” Trump said. “The Constitution constrains us. In order to get where I think we all want to go; it requires an amendment to the West Virginia Constitution. So procedurally in the Legislature, that means affirmative votes of two thirds of the members of the House and the Senate, and then ratification in the election by the citizens. It’s always dangerous to predict and I try not to do it, but I think what I can predict is we’re going to work on it and we’re probably going to vote on it. We’re going to have votes on it this year.”

If approved by the voters, lawmakers would still need to figure out how to eliminate the tax without hurting counties and schools.

“It’s difficult to navigate the political consequences of eliminating it because most of that money goes to the school systems in the local county,” Carmichael said. “But we are committed to find a way. We want to be the Legislature that finally eliminates this tax.”

Hanshaw encouraged the business community, particularly small businesses, to reach out to the public and explain how the business and inventory tax prevents them from growing and hiring more workers.

“This is a topic on which the public needs to hear directly from you as the major employers in West Virginia,” Hanshaw said. “The public needs to hear you say that this is a tax that impedes your ability to hire more West Virginians. They don’t believe us when we say that. And that’s just the reality of where we are as a state. We need you to weigh in on this in as big and loud way as you can if it’s to be done.”

Gov. Jim Justice, speaking on the first day of the chamber’s annual meeting, also said his administration is targeting the business and inventory tax for removal in 2020.