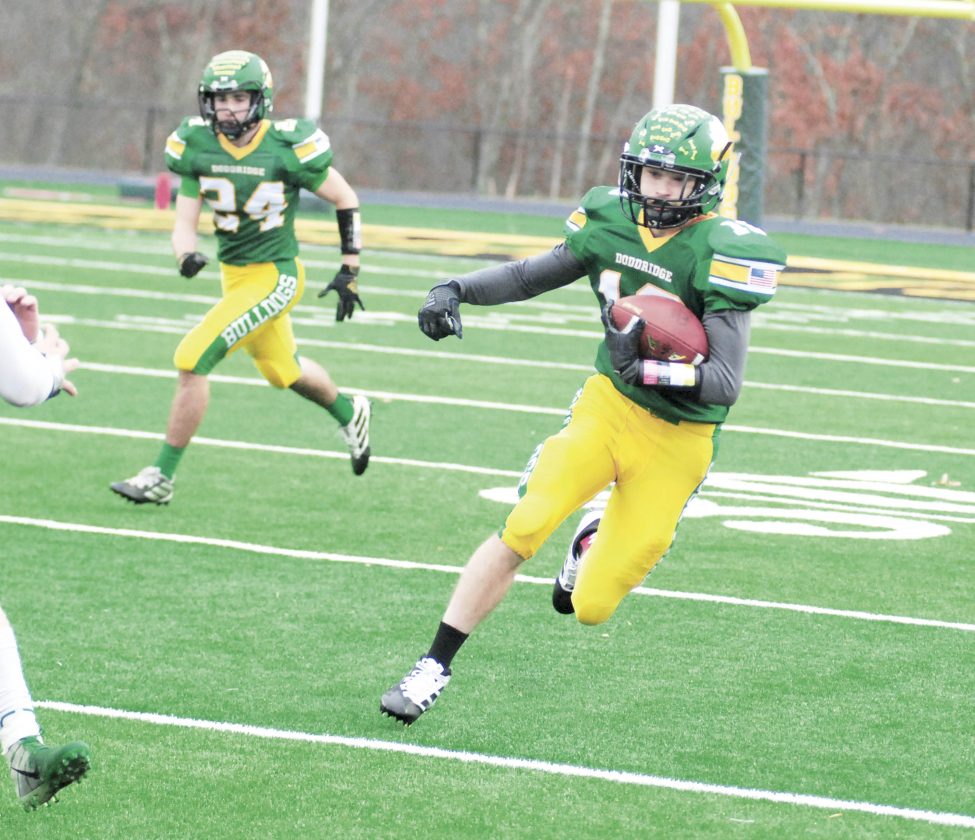 Photo by Jay W. Bennett Doddridge County’s Hunter Jenkins (10) returns an interception, while teammate Reese Burnside (24) prepares to block an East Hardy player in a 2019 Class A semifinal. Jenkins, who put together a record-breaking season, returns for one final go with the Bulldogs. He plans for the team to have more success.

WEST UNION — Hunter Jenkins’ monstrous junior season aiding Doddridge County to a berth in the 2019 Class A state title game won’t be a one-hit wonder if he has anything to say about it, which he does.

Not one month after setting a single-season school record for interceptions with 11, including three in a playoff game against East Hardy, the Bulldogs’ all-state first-team safety hit the weight room hard.

“I wanted to get from 140 to 160 for this season … right now I am 5 pounds away,” Jenkins said. “I decided it could help me in certain things like getting off blocks and tackling. I just love getting out there and hitting guys.”

Every facet of his defensive game is likely to improve from this additional strength.

But this isn’t all.

These gains also got the wheels turning in the head of DC head coach Bobby Burnside. The loss of all-state first-team utility wide receiver/cornerback Griffin Devericks left the Bulldogs in need of a speedy replacement at wide receiver.

Jenkins, who put to rest the football stereotype that defensive backs play where they do because they can’t catch the football and who hauled in two receiving scores one season ago, presented the perfect candidate.

His added strength gives the team another solid run blocker outside the numbers, as well.

All of this adds up to another season under the spotlight when the Bulldogs take the field against Tyler Consolidated in their home opener on Sept. 4.

It’s attention Jenkins isn’t backing away from in the slightest.

“It is great to know I am going to be a focal point on both offense and defense. It definitely helps me get better at both of my positions, too,” he said.

Seeing as he is four interceptions away from breaking the school’s career record held by Devericks and Hunter Riffle, there certainly is motivation for him to learn all he can.

Defensive coordinator Dave “Bear” Burnside is glad to have his safety back and in the mode to get better.

“It is not easy to get players of his caliber,” Burnside said. Having a player of his caliber though opens up all kinds of different options in the play-calling process, he said.

Opposing teams can’t easily avoid throwing in Jenkins’ vicinity. His position in the middle of the field, combined with a blistering speed allows him to cover plenty of ground once the ball is snapped.

“I think they are going to be more aware of him at safety and we will have to mix up our coverages a bit,” said Bobby Burnside.

Not matter what they do, Bear sounded confident Jenkins would be in the right place when called upon.

“In our defensive scheme we try to get him in the best position to make plays and Hunter follows that scheme very well,” Burnside said.

Jenkins believes he’s ready for the task at hand. His ability to read the quarterback along with his in-tune second sense gives him a funny feeling when something is about to happen. All he does afterward is act on it.

His coaches and he are well aware how important his presence will be alongside returning defensive back Jared Jones. The pair lead a young secondary and a defensive unit dealing with the loss of not just Devericks but all-state first team defensive lineman Cole James and linebacker Austin Kelley.

“I feel good about taking over a leadership role. I don’t think it adds any pressure. It is a good thing to be considered a leader and I want to get the team going at full speed. We all have one goal in mind and that is to win games,” Jenkins said.

“We have unfinished business as a whole team. Not winning (a state title) destroyed the whole county and team,” Jenkins said. “Everyone is working hard in the off-season and doing what they need to do. We know how to win and what to do. Now we just have to execute it. We don’t care who we face as long as we get back to Wheeling.”

If the Bulldogs return to The Island, it is likely Jenkins will have had a big say in getting them there.