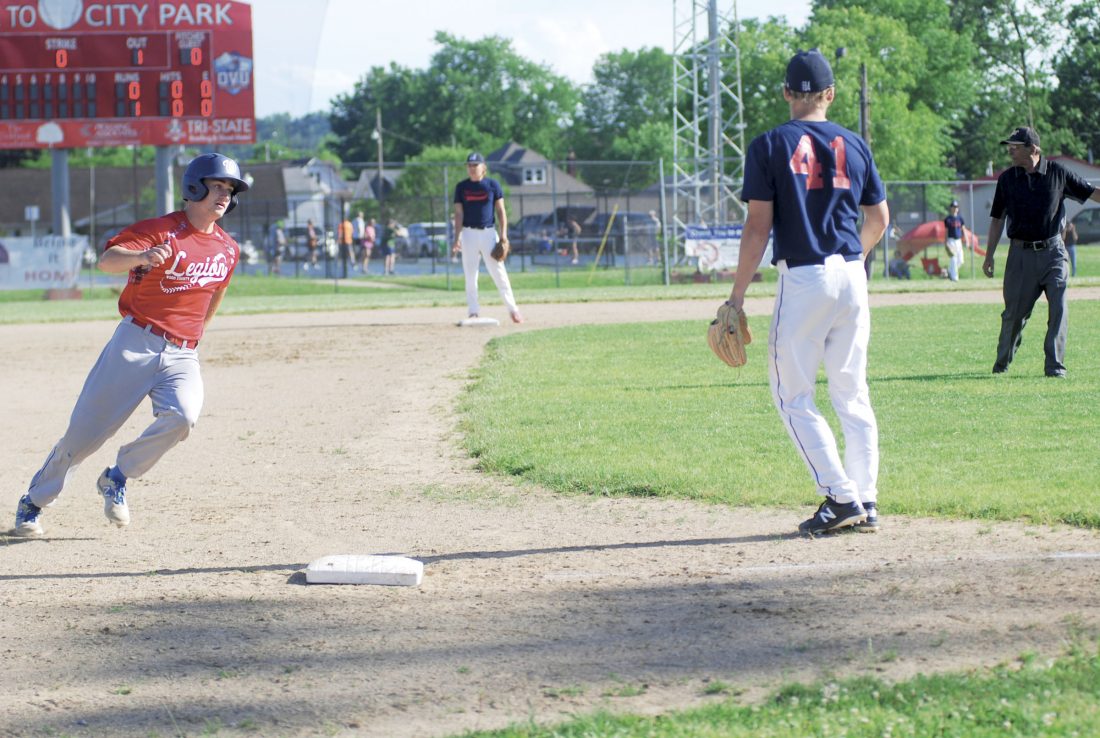 Photos by Jay W. Bennett Wood County Legion's Broedy Boyce rounds third base trying to score in the bottom of the first inning during a 12-8 setback Wednesday night at City Park against Marietta.

Marietta, which plays two games today at the Coschocton Tournament, led 7-1 going to the bottom of the fourth before allowing seven runs.

However, skipper Larry Hiser’s club tied it in the seventh when Miller tripled and scored via a wild pitch.

Consecutive doubles by Hill and Alkire in the eighth were followed by a two-run no-doubt blast to left by Miller as WCL trailed 11-8.

The visitors tacked on an insurance run in the top of the ninth when Logan Adams walked and crossed on Hill’s third two-bagger of the affair. 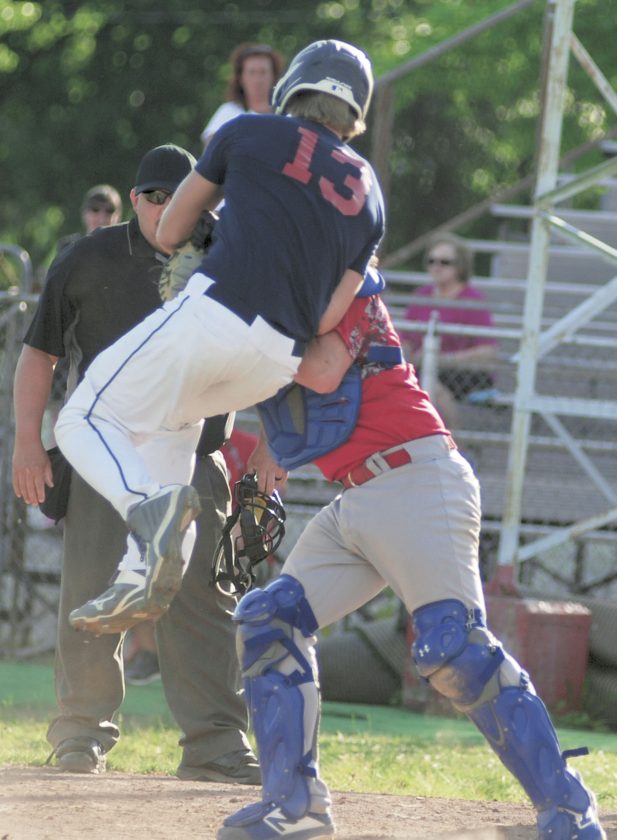 Marietta's Alex Greuey eventually scores after colliding with Wood County Legion catcher Jacob Hoyt in the fourth inning Wednesday evening at City Park. Hoyt had the ball until he fell to the ground and it came out of his glove.

Craig Scroggins worked the first three innings before giving way to Alex Greuey, who allowed seven runs, four earned, in the fourth. Foster Brand delivered three no-hit frames to collect the mound triumph and Hill punched out a pair in two innings to earn the save.

“We’re so young and our young guys hung on by a thread and then Kail’s got some maturity there and you could see that at the end,” Hiser noted. “He really slammed the door shut.

“The top of our order, actually all the way down to the sixth hole, those guys were pretty productive. We do want to win because you can’t help but get that competitive juice flowing when you’re out there, but the bottom line is we got guys trying to get better.”

WCL leadoff hitter Blake McMullen, who went 3 for 5, singled and later scored on an Eli Reeves sacrifice fly to give the hosts the early lead in the bottom of the first. It could’ve been more, but Broedy Boyce was nailed at the plate following a Jordan Batten double thanks to an outfield assist started by left fielder Carter Dennis.

The advantage didn’t last long as Miller, who scored thrice and stole three bases along with missing the cycle by a double, reached via a single in the second. After a Jake Rose RBI hit, Greuey laced a run-scoring double to right-center.

Alkire’s one-out single in the third versus WCL starter Trip Barkley led to a run after he stole second and crossed on Miller’s RBI fielder’s choice.

It appeared manager Mike Goodwin’s club was in big trouble after the Ohio gang pushed four more runs across in the fourth.

A single by Greuey was followed by a sac bunt from No. 9 hitter Mark Duckworth. Adams then blooped an RBI single to left which plated Greuey, who collided with Jacob Hoyt at the plate and was credited with the run when the WCL catcher dropped the ball after hitting the ground. Hill followed with an RBI double and Alkire knocked him in with a single to right. It was a six-run advantage after Alkire scored via an error.

Down but not out, WCL finally got things going in the fourth when Max Anderson drew a leadoff base on balls and stole second. After Hoyt reached via an infield single and Colin Bryant walked to load the bases, Brett Haskins provided a run-scoring knock to center. McMullen then did the same and Boyce followed with a two-run bases-loaded single. After pinch-hitter Nic Menarchek had an RBI single of his own, Batten launched a two-run tater to left-center for an 8-7 cushion. Boyce, who worked five innings with five strikeouts but suffered the loss in relief, was caught stealing by Marietta catcher Justin Thompson for the second out.

“You’re supposed to avoid contact for one and slide. He should’ve been called out,” Goodwin said of the collision at the plate.

“We only scored two times (innings) in the game. I told the kids after the game we have to match them every inning and we did not. That’s why we lost the ball game.”

Wood County Legion will attempt to snap its current three-game slide starting at 1 p.m. Saturday in a scheduled twinbill at Steubenville.