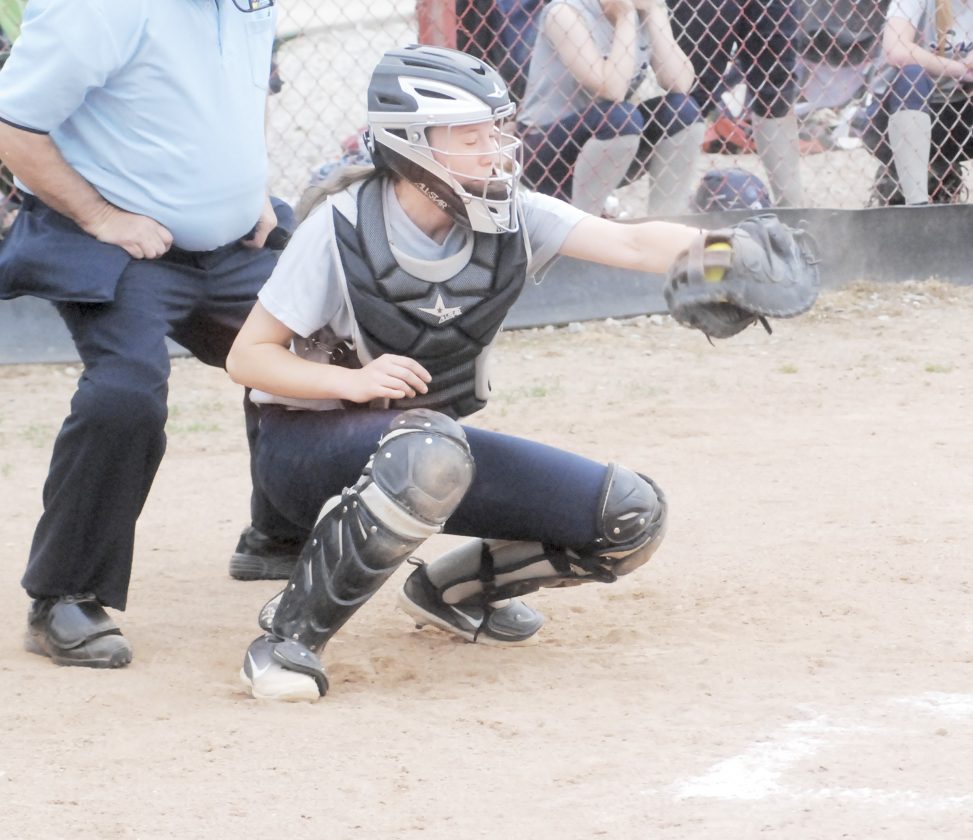 File Photo Parkersburg South catcher G.G. Gerichten, seen catching in a 2019 Class AAA Region IV Section 1 tournament game, was one of the many seniors back for the Patriots this season. All had the goal to erase a disastrous ending to last season in 2020.

PARKERSBURG — Perhaps no Class AAA softball group experienced a rougher ending to last season than Parkersburg South. After the Patriots played their best game of the season in the Region IV Section 1 tournament opener against Ripley, the chance to send rival Parkersburg High home for the season and advance to within one game of a sectional title emerged.

It surely provided a sweet surprise for seniors Alexis Feick and Kelly Amos – both of whom watched each of their previous three seasons with the program end without a shot at state power Hurricane in the regional final. That chance instead going to the Big Reds.

However, one bad inning changed this entire outlook.

After the Big Reds blasted out 11 runs in the bottom of the second inning, South finding the additional firepower to keep up with PHS proved an impossible task in the 19-11 loss. And while there was a little bit of time for the Patriots to collect themselves before an elimination game with Ripley, the Vikings already had a head start and weren’t going down as easily the second time around. Ripley and head coach Ken Swisher finishing what PHS started then ending the Patriots’ season kept the group in sectional purgatory.

In the blink of an eye South went from the highest of highs to a pretty low place.

Yet, the chance to atone for the untimely ending served as an off season pick-me-up for a group desperately in need of positivity.

Outside of the Big Reds’ single frame, the parts were mostly there for head coach Tim Burch and company to hit the ground running in 2020. While replacing four-year starting shortstop Amos and the talented and sweet-swinging Feick were challenges, enough sure-gloved players returned to the Patriots’ defense to afford the group time to find the right players for those positions. Plus, the offense and pitching weren’t anything to shake a finger at with big names back, such as Gigi Gerichten (catcher), Aurora Slusher (center fielder), Kylee McCorkle (right fielder), Zoe Wells (pitcher), Paige Adams (1B), Makayla Sirk (P) and the freshman Taylor Lamp (SS/P).

Burch’s group of seniors also shared the same pain as Amos and Feick when it came to seeing their season end in the sectional tournament. This feeling brought even more focus to the final-year players in their mission.

Add on the fact that the team concentrated on the positivities of a season that saw them advance to within two games of a regional final appearance and the recipe for success brewed within the program.

“The kids certainly remembered what happened last season but we discussed it and made sure we were going to improve in the off season,” said Burch. “There were just a couple of little things that needed to be taken care of.”

And by all accounts, the team improved through the opening days of practice.

“I definitely felt we were better than last year in terms of both coaches and players,” said Burch. “Our three goals were to win the Ohio Valley Athletic Conference Tournament, advance to the regional final, and take our best shot at Hurricane pitcher Harlie Vannatter and I thought we could do all of those.

Even as the COVID-19 pandemic began shuttering many states across the U.S., the Patriots went about their business of improving each and every day in practice.

“We heard rumbling of things coming but just went on as if nothing would happen,” said Burch.

And they had plenty to prepare for in the 32-game schedule. Though it wasn’t a gauntlet filled with state powers in Hurricane and St. Albans, there were plenty of tough games keeping the Patriots on their toes.

PHS and Cabell Midland along with a trip to Sluggerfest served as just a small taste to prepare South for its ultimate goal.

“I felt these kids had what it took but we just needed to believe,” said Burch.