ALBRIGHT: Even without three-peat, PHS girls left behind a big message 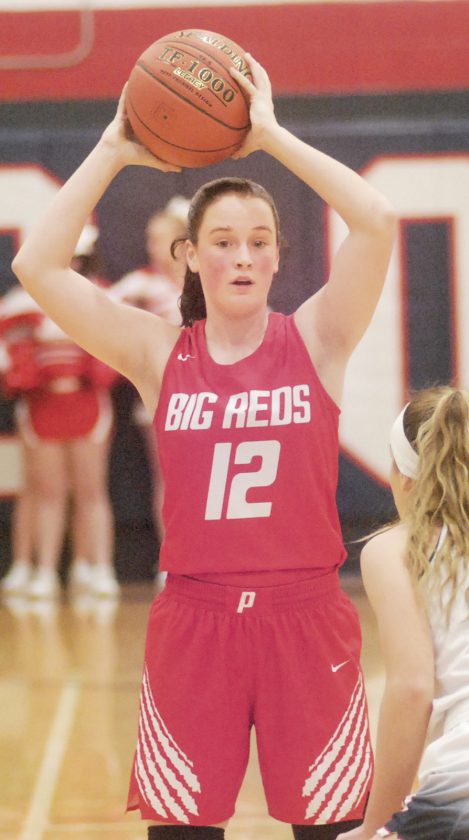 What the Parkersburg High School girls’ basketball team accomplished over the last four years has been incredible. With each all-state selection, Mountain State Athletic Conference title, and state championship won, it became harder not to see the truth that the team’s 2020 class ultimately left behind one of the most storied collective careers in the program’s history.

But one thing sat missing.

“We really, REALLY wanted that third state championship this year,” point guard Maddie Leggett told me shortly after she poured in 12 points and dished out six assists as PHS rolled past Spring Mills in a state tournament quarterfinal in March. Though a University Hawks team out for revenge after last year’s state championship game stood in the Big Reds’ path, chances were high that the Big Reds were going to complete the three-peat.

The roots of why sat buried at the foundation of their success. It was simple and very much to the point — never once over the course of all the winning did anyone think about themselves.

Everything being all about team from day 1 left the group with trust in each other on offense and defense, no matter the moment. Shutting down even the hottest offenses or going on the fearful game-ending scoring streak was something Scott Cozzens’ teams became well known for and feared for around the state. And at the center of the entire scheme were seniors Leggett, Bre Wilson, Aleea Crites, Emily Kupfner and Maggie Richards.

The quintets length, drive, determination and grit pushed everyone around them higher on a daily basis. Either teammates kept improving or they weren’t playing those precious varsity team. Rewards certainly existed for those who answered the call, too. As the mounds of cumulative basketball knowledge between the head coaches and the senior class would likely fill the longest books and then some, those who pushed themselves to become an important part of the rotation felt inevitable.

Of course, it was the defense where every newcomer needed to stand out first. If this wasn’t the case well then players could enjoy the bench. The efficiency and ruthlessness of the point-stopping attack that helped propel the Big Reds leaps and bounds ahead of many teams around the state stayed as crucial as ever this past season. Only one Class AAA team managing to beat the Big Reds over the past three years speaks volumes of the attack.

While the defense certainly helped power them to titles in ’18 and ’19, certain offensive performances made sure the Big Reds finished off title game foes in the Buckhannon-Upshur Buccaneers and University. Again the lack of hero ball meant anyone at anytime could step into the biggest shoes and confidently fill them.

Though Shay-Lee Kirby ultimately hit the free throws that sunk B-U in 2018, Richards’ and Crites’ ability to always be on the same page made those shots possible. The five points Richards assisted Crites on with a little over a minute left in the final period ending the Buccaneers’ desperate comeback attempt set the stage for Kirby, who then delivered.

Then in 2019 with perhaps one of the best public school teams at her disposal, Leggett showed a sharp vision over the course of the entire year. Her assists powered a run to the state championship game before Wilson took the lead from there. In what is surely a well told tale by now, Wilson nearly eclipsed the record for three point makes in a game set earlier in the day by Huntington St. Joe player and friend Paige Shy. Those 3s not only left Wilson with a great memory of the only state final game she ever played, they kept sinking the hopes of a Hawks’ group determined to make the Big Reds another of their upset victims. It was a goal David Price’s University group nearly accomplished. His defense downplaying Madi Mace and Kirby’s offensive impact in the game left the door open into the fourth quarter. This approach worked until the last of Wilson’s ridiculous shots finally pulled the Big Reds away for good.

As if the championship wasn’t enough, four of the Big Reds ended up on the Class AAA all-state tournament team at the end of the night.

It may seem Kupfner and Richards didn’t receive a ton of the spotlight, but don’t sleep on their contributions. Kupfner’s willingness to play no-holds-barred defense for as long as possible while suffering from a breathing problem gave Cozzens a super defender along with someone who provided valuable rest for others in the rotation. Richards’ ability to be in the right place for a rebound or steal combining with her always running motor made the starting lineup run smoother.

For those looking to see the process run to completion with underclassmen, look no further than the transformations of Kristen Lowers, Kisten Roberts, Sierra Mason, Taylor Miller into invaluable pieces on both sides of the court. All of them provide critical moments that helped the Big Reds weather the losses of Kirby and Mace.

This belief in team and including everyone led the Big Reds to the gates of a third consecutive state champion.

And even though COVID-19 eliminated the possibility of hanging the number 2020 on the banner inside the Parkersburg High Fieldhouse, the class of 2020 can rest easy as its impact stretched far beyond numbers on a wall.

Their accomplishments rewrote the year-in and year-out expectations for the incoming classes. Though the talent may not always be as high as theirs, the message was simple: Stay together and you will accomplish far more than a team consisting of many individuals out for their own glory.