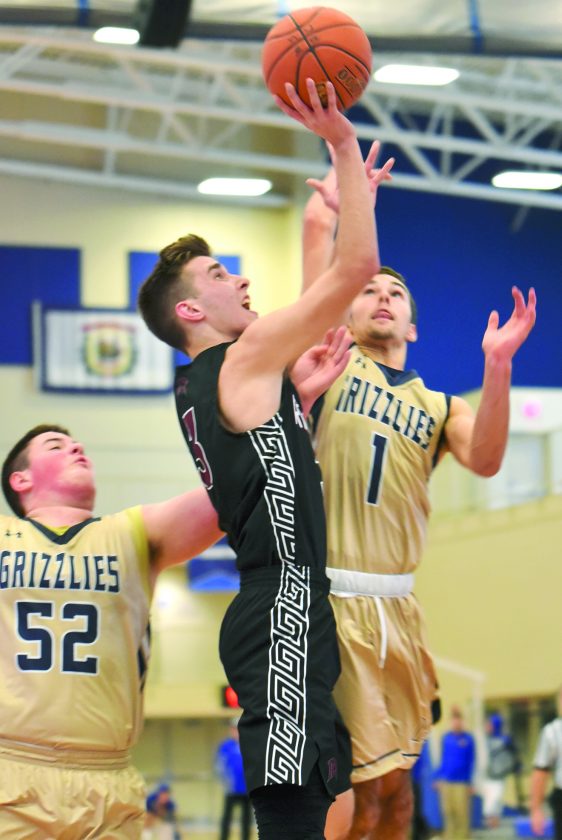 Photo Provided by Sue Knotts Roane County’s Brayden Miller goes up for a basket during a high school boys basketball game this season.

Recently selected to the second team of the Class AA all-state squad, Miller had quite the solid campaign.

However, the ongoing COVID-19 pandemic is putting a crimp in his routine.

“They put up like park closed signs and no one is playing there and the principal won’t let me in the school,” Miller said.

“I’m lucky enough to have my own basketball court, but it’s not the same as playing in the gym. It’s like 20 by 15, just a court outside.”

Before everything came to a near halt in society, Miller said he finally was able to get a reverse jam down at the gym.

“That was pretty cool,” he said. “They won’t let me in the school so I figured I’ve got to do something. I’m working at Sims Greenhouse in Wirt County.

“My aunt and uncle own that. I figured I’ve got to do something. It’s not open yet so I’m not really around anybody, just transplanting and carrying stuff pretty much.”

A love of the sport started early for Miller in third grade. He later looked up to former Raider great Jacob Neal and the near 6-foot-2 guard has been going hard ever since.

His junior averages of 21.2 points, 6.8 rebounds and a Mid-Ohio Valley best 5.9 assists per game also landed him a spot on the all-Little Kanawha Conference first team.

Still, he wasn’t exactly pleased with the season.

“My goals at the beginning of the year, we fell short of some of those,” Miller noted. “I wanted to compete for a conference championship and get a chance to state. I didn’t complete on those goals. Those are my ultimate goals.

“We’ve had online work. It’s tough, though, some of our computers don’t work. It’s frustrating. I just miss being around all my friends. It’s just weird when everything is kind of halted. It’s just an odd situation.”

Miller said he’s able to pass a decent amount of time at work and then “I get through days and get up and do it again.”

The Raider said he often heads over to County Stadium and runs the bleachers along with logging a couple of miles running on the track.

“I guess it was just one of those days,” reflected Miller. “I’m hoping I’ll have another shot to break it again. It was crazy. It just felt surreal at the time. I didn’t know until halftime and then our bookkeeper (Wes Mealey) looked at me when I was walking out and said you have 33 points.

“I was feeling pretty good. I thought I had 20 or 25 points. I’d only missed one shot so far (a dunk). I couldn’t believe it and realized I had a shot to do something special. I was really in a zone.”

Despite his scoring prowess, that’s far from Miller’s favorite part of the game.

“I’ve always been like a defender, playmaker guy my whole career,” he said. “My whole life I’ve never been a scorer until this year.

“I think I’m best at distributing and running the offense. Throwing nice passes is my favorite part of basketball.”

Planning to play hoops somewhere at the next level, Miller said he was going to compete in AAU, but that isn’t going to happen

He also spends a lot of time working on his mid-range jumper and getting as much elevation as he can in order to shoot over his defender.

“It’s not bad,” Miller replied when asked if the current situation has been taxing mentally.

“I’m sure if I was home all the time it would be pretty miserable. I’ve been lucky enough not to have to be home 24 hours a day.”

Overall, the Raider said he’d give himself a ‘B’ grade for his junior campaign.

“I want to improve and have a way better season next year,” he added. “I had a couple games that were rough that I’d like to have back.

“I’m just trying to wait it out and think positive and just try to do my best to keep my hands washed, not touch my face and get through it.”