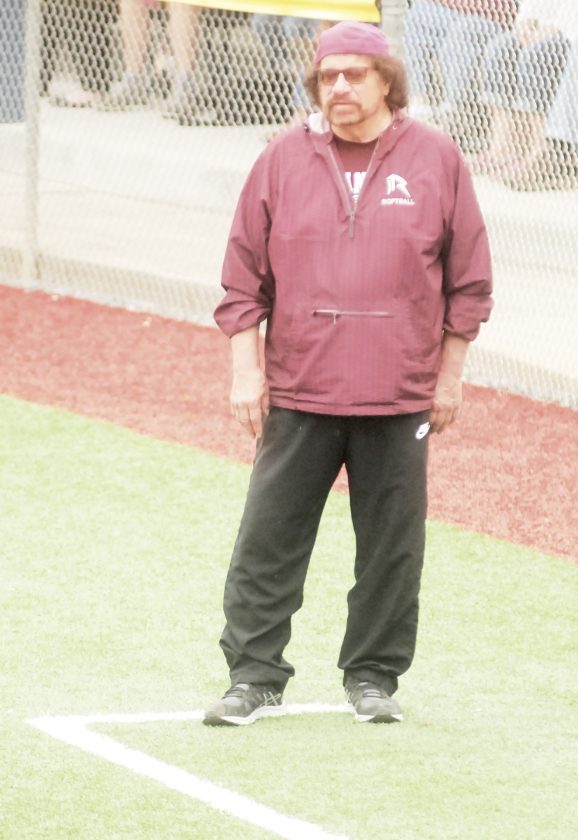 Photo by Jay W. Bennett Roane County head softball coach Sam Salvucci looks on after talking with his team between innings at the 2019 Little Kanawha Conference tournament in Glenville.

SPENCER — This past weekend was going to be an exciting one for veteran Roane County head softball coach Sam Salvucci.

The Raiders were heading to Weir for a game on Friday and then Saturday was supposed to be a twinbill against Madonna.

“Then I was going to Pittsburgh to visit my 93-year-old mother,” Salvucci said. “Poor woman is stuck in a senior citizen high-rise. You can bring in food, but you have to leave it in the hallway.

“It’s a bad situation. I’ve been calling her every day. My sister is up there, thank God, to take her food. That’s the way it is. The new normal.”

The ongoing COVID-19 pandemic has changed the way of life for almost everyone.

“I go out. I walk 1,000 yards every day and I go where there is nobody around,” said the Raider head man. “I come home and that’s my life right now. Planting the garden and lifting weights every day.

“We had a decent team ready to play softball. A month ago my biggest worry was who is going to play third base, just a month ago. I can’t believe this.”

Salvucci said he hasn’t bought a newspaper in three weeks because he’s afraid to go anywhere to buy one.

“The worst part about this is we don’t know what we don’t know,” he admitted. “The NFL is talking about going to training camp in July and playing games without fans in August. Must have a crystal ball because I can’t see what’s going on.”

One of several reasons Salvucci was looking forward to the campaign was the return of junior Allie Mace, who was a first team Class AA all-state selection last spring.

“I got the MVP of the LKC coming back and I got probably the fastest girl in the LKC in Katie Gaughn and six good freshmen to stick in there and replace those four seniors we lost.

The head coach admitted at times he’s just had to decompress.

Taking in too much information and not having regular freedoms has been far from easy, but he realizes he’s in a lot better shape than some.

“I still got relatives over in Italy and Tuscany. I guess the rich people in Italy are hoarding food and the poor people are robbing food trucks,” he said. “I guess Sicily is really bad.

“It sounds like they are turning into chaos. I’m planting a garden and anything I can put into the ground that will turn green. Everybody says don’t worry so that kind of makes me worry.”

Salvucci, who is in his fifth year of retirement from teaching, said he wasn’t sure if he could count this season — his 21st — or not.

Although he wishes he had the answers, he does not.

“I got a granddaughter (Hannah Salvucci) who is a junior for Franklin and Marshall College and they started off 4-0,” he added. “She’s hitting .380 with like three doubles and just hitting a ton and she’s big, strong and the fastest player on her team and they were supposed to go to Florida. They canceled the season before they left and she’s just been devastated.

“That was three weeks ago. I don’t know what to tell these kids. I have one senior on the team, Abby Nichols, and she was a good friend to Alex Miller, the boy who died on the football field. Softball was going to be a time for her to heal and she didn’t get to do that. Man, I don’t see us going back April 30. That’s not happening.”

The softball team had made it through 11 practices. Even though only two were outside, Salvucci was working his team hard.

Granted, it was still early, but he was liking the way things were coming together.

“We just had a good group of freshmen and a lot of fast kids and great attitudes,” Salvucci added. “Man, those days in the gym I worked the heck out of those girls.

“If you don’t like to run, go join the track team. They worked hard and never said a word. Nobody complained. We were really looking forward to this.”

At times during past years, Salvucci quipped “I wish we could’ve canceled the season.

“God, I even miss (Ritchie County head softball coach Dave) Mossor if you can believe that.”

The main extent of Salvucci getting away from home is to go to a local grocery store, hand them a check and have food tossed into the back of his truck.

“I’m just trying to stay away from people,” he added. “I’d like to be around for at least 10 more years anyway. I keep trying to do what they tell us to do. There are still nine states that don’t have stay at home orders. I’ve heard kids complain on the internet about having to stay home.

“I told them your government is asking you to stay home. They are not shipping you to Vietnam to get your butt shot off. There is a darn big difference there. Do the little bit you are supposed to do and get through it. They have no idea what’s going to happen with this, no idea. Just glad we don’t live in New York City.”

Salvucci also noted he had a granddaughter who “went to Shannon’s School of Dance in Spencer. She’s now 13 and the middle of April they had a big trip planned to New York City to go see the dancers.

“They were going to perform in the park and they already put money into it. They are not going now, but I hope they get some kind of refund. That’s up in the air now.”

Like many, Salvucci said he’s afraid the pandemic “is going to go into summer and into the fall. Who knows what’s going to happen. I just hope I’m around to see it happen. I miss softball. I really miss softball.

“I sent an email to the team Friday and said stay home, it’s the only way to stay healthy and keep us elders healthy, elders like me. I hope that’s what they are doing.”

Salvucci completely understands things appear to be heading in a less than positive direction for most of the country.

However, he plans to keep doing his part to help out and is preparing the best he can for whatever might unfold in the future.

“I’m planting a garden,” Salvucci stated emphatically. “My grandparents all told me about surviving the Great Depression.

“By eating turnips, radishes and rabbit. That’s what we might be reduced to before long.”