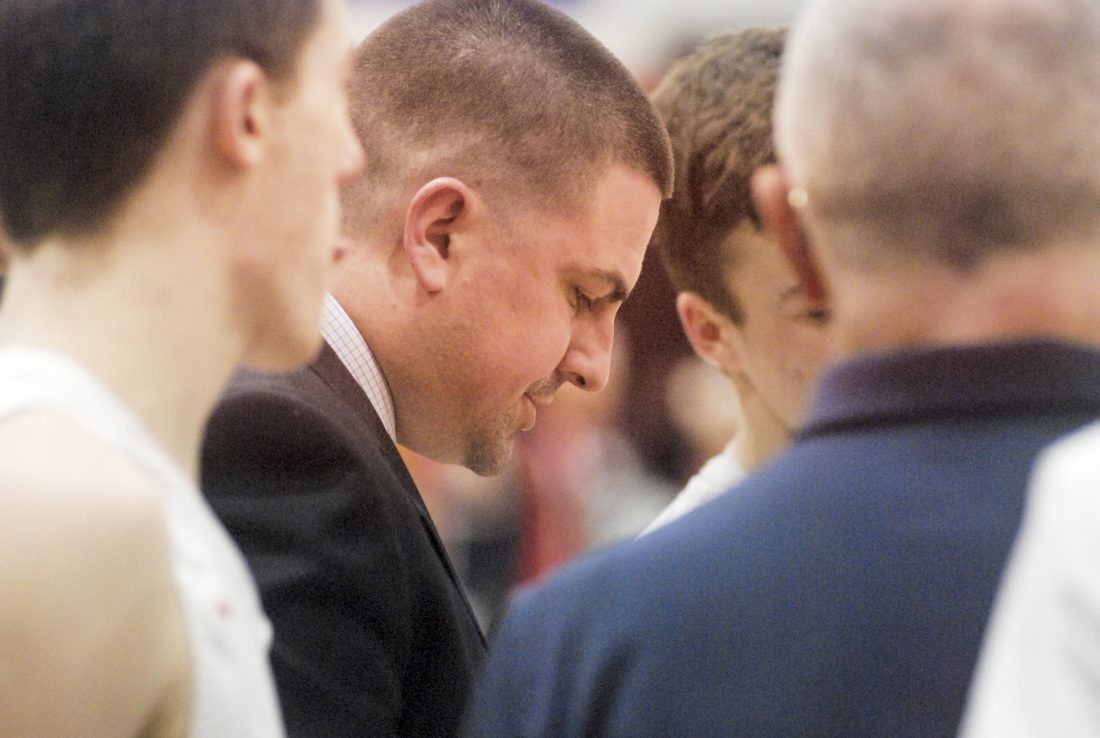 Parkersburg South head coach Brett Rector draws up a play during a timeout.

Of course, there’s still a slim chance the Patriots could play again as PSHS advanced to the Class AAA state tournament for an eighth straight year, but that’s looking unlikely.

Both coaches agreed their initial stints at leading a program had some ups and downs, but overall it was a positive and more than enjoyable experience.

“We had an eight-game turnaround,” Rector said of the Patriots posting a 16-8 mark. “I thought we were on the verge of being great. I think we had a good year, a very good year.

“We were maybe three, four, five possessions away of having 18, 19, 20 wins. We lost by one possession at Huntington and at South Charleston. I want it to be better constantly. That’s how I’m wired.” 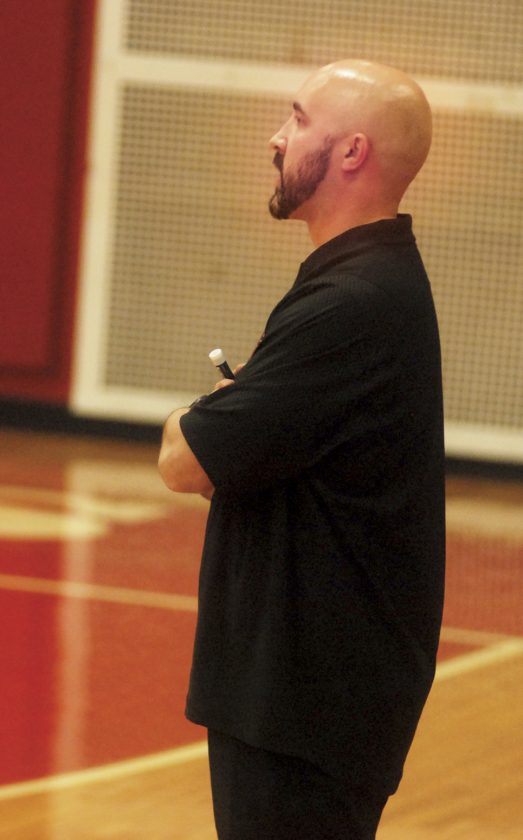 PHS finished the campaign at 8-17, but lost seven contests by single digits.

“Like I told everybody I enjoyed the first year. It was different, definitely,” Crislip said of having to make all the decisions. “This is kind of building a foundation for the future.

“I got great senior leadership from (Sam) Potts and (Noah) Umpleby and they did everything I could ask for, which is going to help where we go next year and three, four, five years down the road.”

The Big Reds were picked to finish 11th in the Mountain State Athletic Conference and ended ninth.

“We were 4-6 and there was only one game we weren’t competitive in,” Crislip said of the conference schedule. “The kids battled all year and bought in what we tried to accomplish, but the wins weren’t always there. We expected a lot, but they gave a lot.

“What I keep telling the kids, you did everything I asked year one. Now, see if we can take the next step. We can’t do it right now with the coronavirus, getting in the weight room and the gym. They need in the gym and weight room.”

South’s eight-game turnaround was actually the best mark in triple-A this year, but the Patriots do lose eight seniors.

“I’m encouraged because even like our regional championship game, if you didn’t know any better and just watched that game you could say Jake Hogsett is the best player we had and he’s a junior,” Rector said.

“And at moments you’d say Ashton Mooney is. There’s some excitement with those guys and they did a bunch of stuff for us in certain games and they’ll be relied upon heavily.”

When asked about his first-year of leading PSHS the coach admitted “I’ve prepared my entire life to be a head coach. Until you actually get in that seat, it’s just a little different. One of the main things to me is you have to make so many decisions.

“What time is the bus leaving? What kind of gear? Are we playing in this tournament? This guy is five minutes late to a shoot-around, what are we going to do? You have to make so many decisions and there are repercussions and consequences you have to make.”

Being an assistant coach Rector admitted “you just throw out your opinions. That part was different for me and I loved every second of it.

Crislip added “this is going to be a big offseason to see if we can take the next step. I’ve enjoyed it. Again, I say God puts you in places for certain reasons. We had a lot of adversity and I don’t think we ever had the same starting lineup because of outside circumstances.