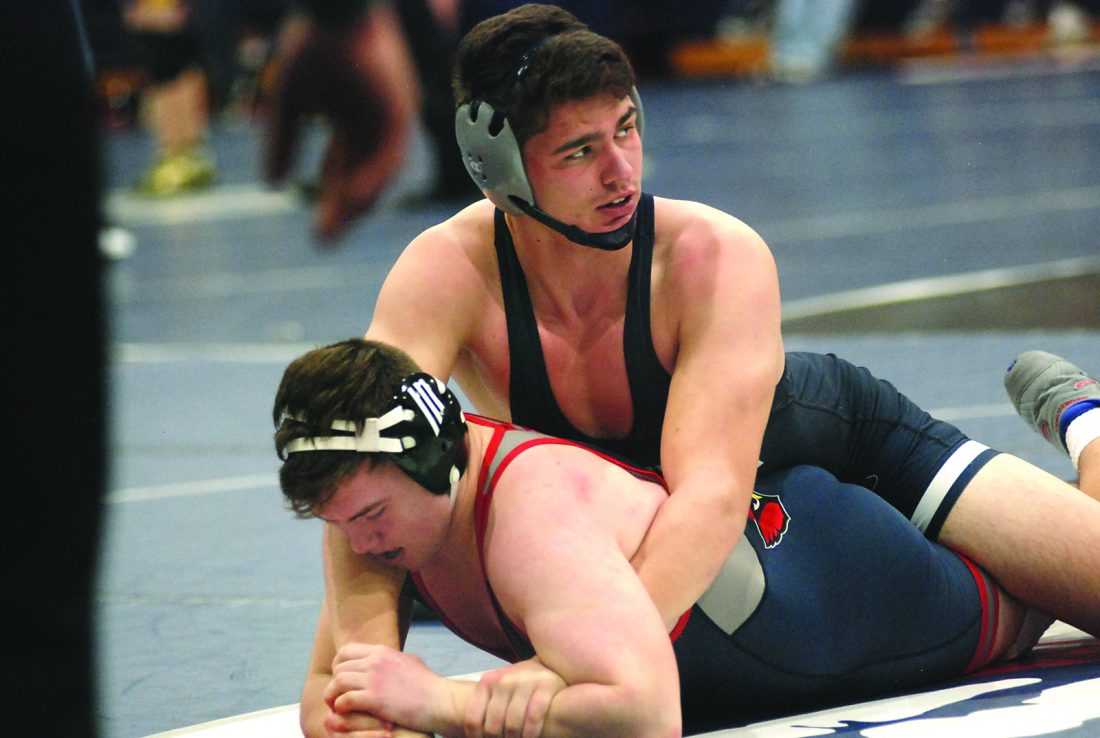 Photo by Josh Hughes Parkersburg South 182-pound junior Noah Buckalew, pictured here (top) during the South Classic, is one of 14 Patriots competing in the state tournament, which begins Thursday in Huntington.

PARKERSBURG — Braxton Amos and Brayden Roberts soon will be going their respective ways into Division I college wrestling, but the pair are amped for the final weekend of their prep careers inside Huntington’s Big Sandy Superstore Arena.

The 73rd annual state wrestling tournament is set to get underway at 6:30 p.m. Thursday. The Patriots of head coach Shaun Smith are seeking a sixth consecutive Class AAA crown while Amos (220) and Roberts (152) are going after their third career crown as too is junior 145-pounder Gavin Quiocho.

“It’s just kind of crazy. It feels like yesterday it just started,” said the West Virginia University-bound Roberts. “I remember it all. It feels like this season is just gone already.

“I’m excited for the state tournament and to move on to the next level. It feels like this season just now started. I don’t know if I’m ready for it to end yet.”

For Amos, who is still undefeated and has yet to allow an offensive point to an opponent, he’s excited to see how things play out this weekend.

“It’s a lot different than the last couple years,” said the Wisconsin commit. “Sophomore year it was OK we’re going to win. How bad are we going to win and last year it was like that to an extent. We had things wrapped up by Friday night. This year we are a young team, even some of the older guys aren’t really experienced.

“It’s definitely different, but it’s more fun with the pressure on us to perform. If one of us falls everyone else has to pick up the slack. It’s been a lot of fun to see how far our younger guys have progressed.”

Trent Jones was the regional champ this year at 126 as a freshman and is ranked fourth.

“Our upperclassmen leadership, we’re expecting them to do the job they’ve been doing all year,” coach Smith said. “Now, we get to see the opportunity for the younger guys or maybe guys who didn’t start on the team last year. I’m looking forward to see what they can do as well. If we go in there with the mentality that no one can beat us I think we’ll be all right. It’s important not to get ahead of our first match.”

“When the freshmen came in this summer, I was in and out of the room traveling. I was like these guys are young and now I feel comfortable being able to hand the reigns off to them.”

With today marking the final official time the seniors will be in the mat room, Brayden Roberts is just appreciative of everyone who has helped him along the way.

“This place is awesome. I got a lot of good memories and a lot of bad memories too, most of them are good memories,” Brayden Roberts said of the mat room. “I got a lot better wrestling and became a better person in there and built relationships. I’ll always remember this place. If there are any future wrestlers out there that want to join this crew I think it’s a great idea.

“Even though I wasn’t a bad wrestler in middle school I got levels upon levels better from middle school to high school. My freshman year I got astronomically better and the same thing happened again my junior year to this year. It’s a good atmosphere in here and a lot of people to get you to work hard and push you and help you become the best person and wrestler you can be.”