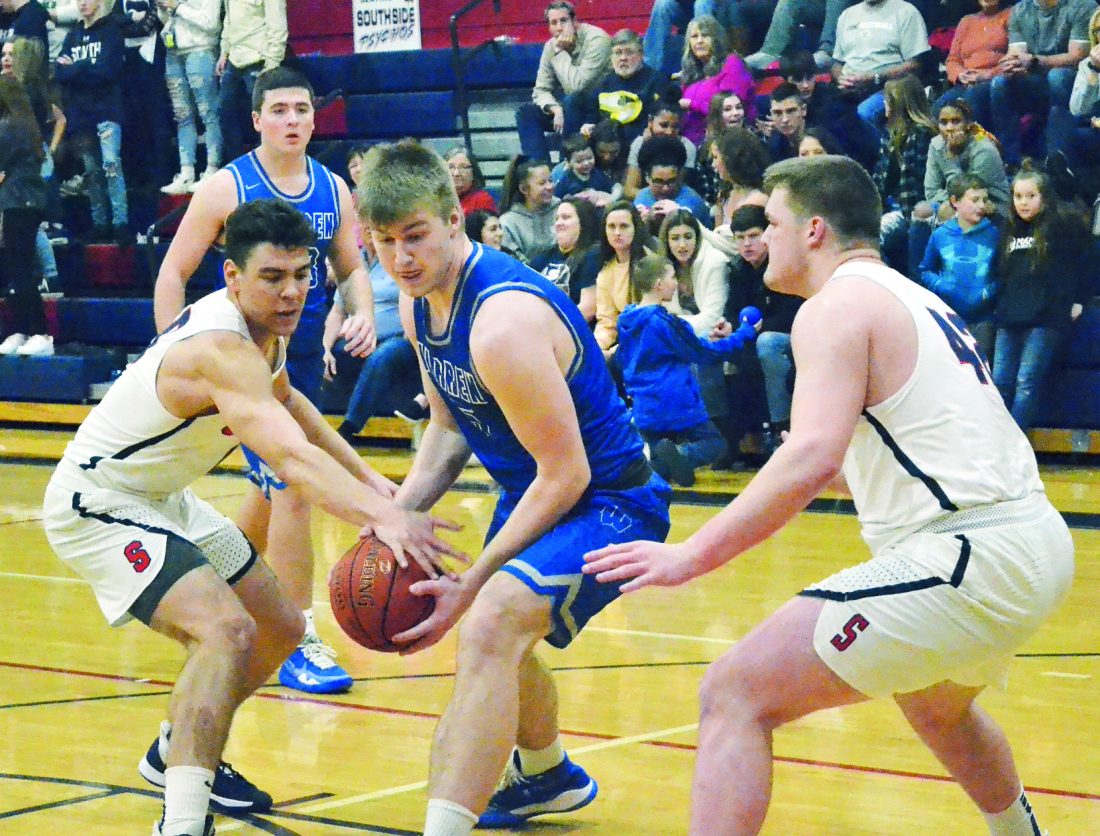 PARKERSBURG — Say a prayer for Bill Camp and his family.

The Parkersburg South statistician’s mom had a medical emergency in the bleachers at the Rod Oldham Athletic Facility Friday night and was transported by ambulance to a local hospital.

Play was halted with 1:08 remaining in the contest and the Patriots leading the visiting Warren Warriors, 45-34, so that Camp’s mother could be attended to on the court.

After a few minutes, Warren head coach Blane Maddox, South boss Brett Rector, and the officials agreed that there was no reason to resume play due to the situation.

“I’ve never seen anything like this,” Rector said. “After the game, I told the guys in the locker room that I didn’t have much to say, except to say a prayer for Billy and his family, and that we’ll deal with the basketball stuff later. So, that was kind of how we ended it.”

“Again, it just shows you how fragile life is,” the Parkersburg South coach continued.

Warren senior guard Brandon Simoniette agreed and added, “It’s just scary. It makes you really appreciate every second. You never know when life can be taken from you.”

Malaki Sylvia paced the winning Patriots (12-6) with a game-high 20 points, including one dunk. Nathan Currey and Jake Hogsett chipped in with seven markers apiece.

“Malaki was really an offensive force, and he has been all week,” Rector said. “I mean, he’s been awesome.

“He’s really coming into his own. He had 30 against Capital on Monday and 37 against Riverside on Wednesday. I feel like he’s playing harder, and I think that’s what you want towards the end of the season.”

Warren (13-8) was led by Simoniette’s 15 points. Jake Baumgard added nine. Earlier this season, the Warriors dropped a 53-49 triple overtime decision to the Patriots in Vincent.

After the Patriots started the game with a 10-0 run, they never looked back. Sylvia scored six points and Marks five to stake South to a 14-6 first-quarter advantage.

“We had trouble scoring at first,” Simoniette said. “Got down 10-0 early and just couldn’t come back.”

During second-quarter action, Currey tallied five points coming off the bench and helped South take a 22-13 halftime lead. Simoniette had five of Warren’s seven points in the period.

In the third quarter, Baumgard had the hot hand, scoring six points, as the Warriors reduced the deficit to four points (27-23). Sylvia got a late putback, though, and the Patriots led 29-23, going into the final eight minutes of play.

South was able to stretch its advantage back into double digits in the fourth stanza, and got a boost from Hogsett, who scored all seven of his points in the period.

Hogsett was at the foul line at the 1:08 mark when play was stopped and ultimately ended.