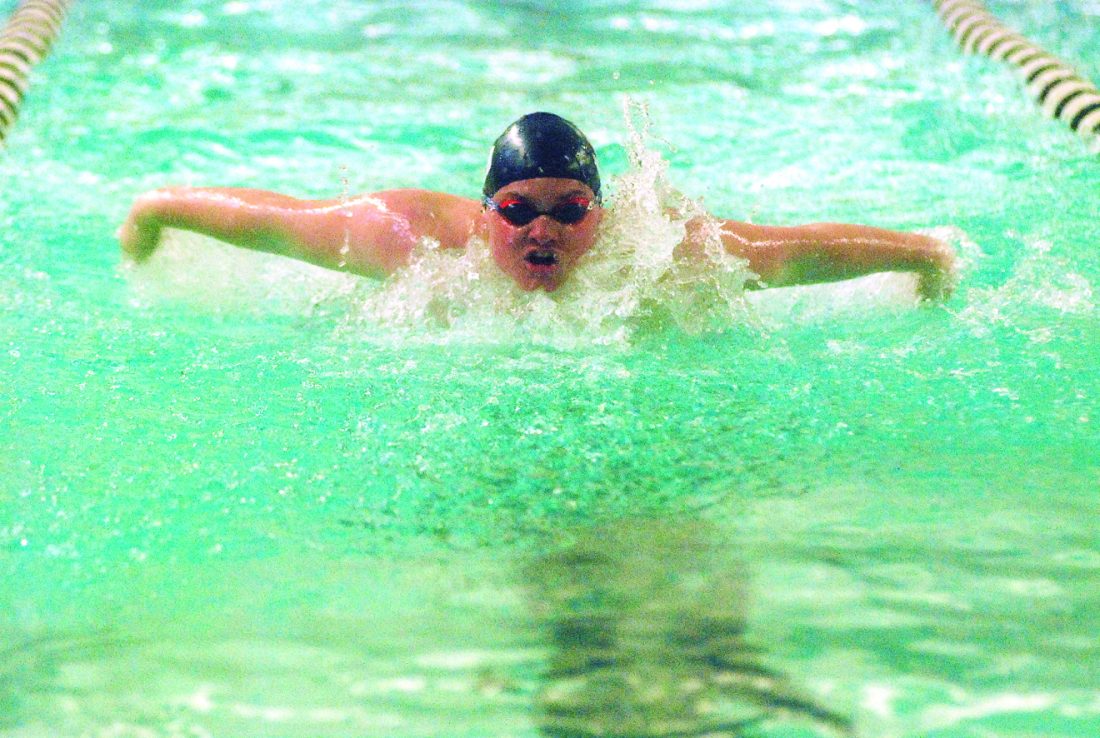 Photo by Tyler Bennett Parkersburg South’s Mikey Meyer competes during the Patriot Invitational earlier this season. Meyer and the Patriots will be competing for the triple-A state championship today and Friday in Morgantown.

PARKERSBURG — First-year head coaches Emily Martin of Parkersburg and Ryan Radcliff of Parkersburg South are hoping for the best as their respective programs begin action at 9:30 a.m. today for the state swimming championships being held inside the Aquatic Center at Mylan Park in Morgantown.

Girls preliminaries start this morning with boys prelim action getting underway at 4 p.m. Championship Friday is set for a 9 a.m. start.

The Big Red girls have captured the past two state crowns, but the red and white have plenty of challengers for a three-peat.

“For the girls, we definitely could win it, but it’s going to be a really big challenge and everything is going to have to go absolutely perfect,” Martin admitted. “George Washington is really the team to beat on the girls side this year. They’ve got a lot of depth and a lot of fast freshmen.

“They are going to be the team to beat. There are five other teams including us that are competing for runner-up and see if we can take them down and get that state championship.”

PHS senior Grace Cox, who is off to Marshall University, is the defending state champ in the 200 freestyle and had the fifth fastest regional time. Cox had the second quickest time of all the regionals in the 100 butterfly, where she took third at state a year ago. Cox’s time of 1:01.54 was only bested during regional competition by Winfield’s Madeline Foster, who touched in 59.95.

A year ago, then Big Red sophomore Jaden Welsh established a new state meet record of 1:05.79 in the 100 breaststroke. At regional, her clocking of 1:10.17 was second best in the state behind the 1:06.59 posted by Wheeling Park’s Jenna Bopp.

Although the Big Red girls set a state record in Morgantown in 2019 with a 1:50.52 effort in the 200 medley relay, a repeat title in the event won’t be easy. Cox, Welsh, Mary Strobl and Emma Padden won Region I with a time of 1:55.81, but George Washington had the fastest regional time in the 200 medley relay as the Patriots won the Region IV crown after touching the wall in 1:53.41.

Strobl, who was fourth as a 10th-grader in the 100 backstroke, had the sixth best overall regional mark. Big Reds Emily Kammerer and Tori Fluharty along with Parkersburg South’s Alia Ott and Hailey Boothe also qualified for the event at state.

The PHS girls also won the 400 freestyle relay a year ago. Padden, Strobl, Welsh and Cox went 4:01.06 at the regional, which was good for third there and eighth in the state.

Welsh, last year’s state runner-up in the 200 individual medley, punched her ticket back to state in that event by having the eighth best time in all regions. Big Red teammates Ryan Lincicome and Isabella Farinash also will be looking to score PHS points in the 200 IM.

Strobl, Ott and Farinash also qualified in the 100 butterfly as too did Boothe in the 200 freestyle. Padden will be out to make the ‘A’ finals in the 100 freestyle, where the Big Reds’ clocking of 57.32 was eighth best among all regions. Fluharty and Kammerer also will look to score for the red and white in the event.

Parkersburg had the only two area 500 freestyle qualifiers in Lincicome and Megan West.

Both PHS and South’s 200 freestyle relay teams advanced to the final meet of the season.

The Big Reds, who had the sixth fastest regional effort, feature Kammerer, Fluharty, West and Padden. Boothe, Chloe Santoire, Kramer and Ott will compete for the Patriots.

“Seed times from regionals I think they can be misleading,” coach Martin added. “We use regionals to kind of see where we are. Last year, I think Grace was seeded like fifth in the 200 free and she went out and won it. She’s faster this year than last year. They are looking so much faster in the water than they have in the past.

Coach Radcliff, who was hoping future potential Division I recruit Macguire McDuff would have a big junior year effort at the state meet, won’t have his top swimmer available. A double-winner as a sophomore after taking the 100 and 200 freestyle events, McDuff was ready to go for state titles in the 50 free and the 100 backstroke. However, the Patriot lost his eligibility appeal on Tuesday to the West Virginia Secondary School Activities Commission and has been removed from the meet.

“He got heavily recruited from that meet,” coach Radcliff said of a Dec. 14 meet in Pittsburgh where McDuff raced, but the PSHS team was swimming in Wheeling which broke a state rule. “The whole team supported him. Everyone looks up to him. He’s a bonafide leader on the team. They want to do what he does. That meet changed his life and opened up doors. High school swimming is not going to define him.

“He’s the real deal and he’s going to go way beyond that. We swam the (regional) relays without him. We were planning to add him in the relays, but it’s not going to happen. It sucks for the kids on the relays with him who all bust their butt to have a shot at a state title. The other kids have worked hard to qualify and we are still on track for all of them to do well. Kids like Landon Fowler, he’s got a shot to make finals, and Mikey Meyer qualified in two events and has a shot getting into a final.”

Fowler had the sixth-best regional time in the 200 individual medley and like Meyer also qualified in the 100 butterfly. Meyer also will be in the field for the 200 freestyle along with Big Reds Ethan Metz and Lucian Baumgartner, who had the fourth fastest statewide regional effort.

Aside from Fowler being in the 200 IM, the Big Reds have three more potential scorers in Carty Ramsay, Garrett Colvin and Ian Sasyn.

In the 400 free relay, South is expected to go with Murphy, Meyer, Fowler and Haught. PHS has Ramsay, Baumgartner, Solc and Bertram swimming the event.

Coach Martin said she’s excited to see what the boys can do during the biggest meet of the season.

“They got so much potential and really surprised us with what they can do and how they can compete,” Martin said of her youthful team. “I don’t know how they will be able to do place-wise.

“I’m not sure if they will be top five or not. There’s some tough competition. I’ll tell you, the boys team is going to be one to watch in the next three years.”