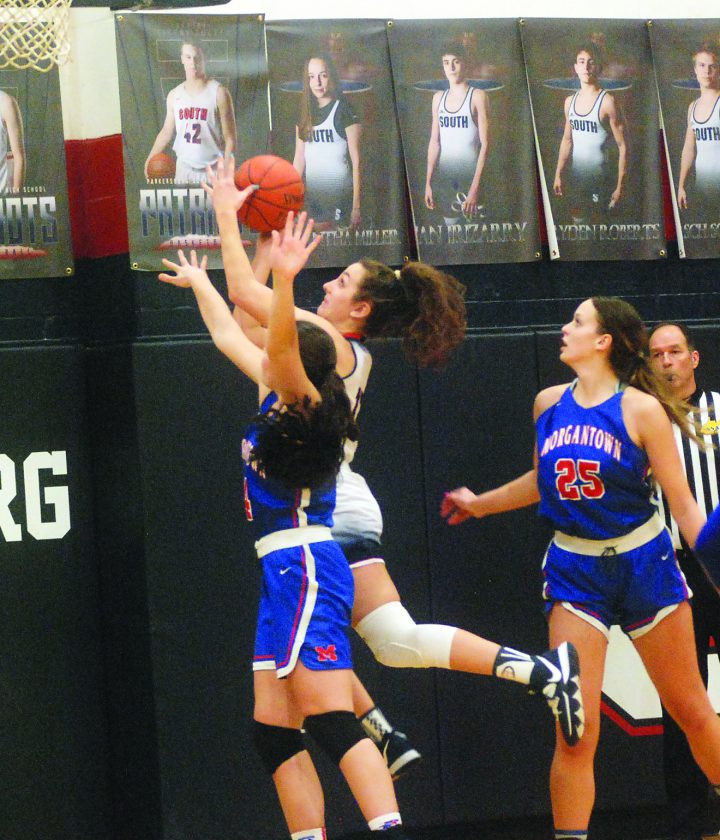 The Patriots held pregame honors for Makenna Winans, Erin Williams, Ashleigh Utt and Lauren Pelfrey, as each senior spoke about the memories they will take during their time playing on the hardwood of the Rod Oldham Athletic Center. At the tip, Winans, Williams, Utt and Pelfrey joined Skylar Bosley to start the game. Both offenses got off to a cold start, as Bosley scored on a layup off a steal to start the scoring off with 5:08 on the clock. The mantra of defense winning championships was in full effect, and after South led 10-5 after a quarter, both the Mohigans and Patriots picked up the pace.

Hannah Wingrove and Rylee Harner helped keep PSHS (8-13) afloat while Morgantown’s Kaitlyn Ammons collected multiple rebounds to give her squad opportunities at second-chance points. Baskets from those two maintained the lead, and Williams chipped in to help the cause with a pair of free throws at 5:02 to up the South lead to 15-9. The brightest offensive spark of the night came when the visiting Mohigans (11-10) went on a 12-5 run to end the half up 21-20.

The score was kept close in the third, and head coach Rick Dobson’s Patriots responded even after he was whistled for a technical foul late in the frame.

During a Morgantown possession, Bosley pressured the MHS ballhandler just past halfcourt. The ball bounced off Bosley’s foot and went rolling into the backcourt where Bosley tracked it down. With 2:15 on the clock, Bosley was whistled for a traveling call due to pressure from the Morgantown player on the other end. Dobson took exception to this and was given the whistle. He declined to comment on the situation after the game, and the infraction gave Ammons two freebies from the charity stripe.

Even after this, South only trailed by a score of 33-30. Both squads kept up the pressure, and the Mohigans took a 35-32 lead into the last eight minutes.

The fourth quarter saw all nine combined points come from the free throw line, and South’s Williams buried a pair with 29.5 seconds left to cut into Morgantown’s advantage, 38-36. During the following MHS drive, PSHS ramped up the pressure. Wingrove picked off a pass meant for a Mohigan, as South took a pair of timeouts to set something up with 10.7 seconds left.

Unfortunately for Parkersburg South, the pressure from Morgantown defenders led to a mishandling of the ball on the inbound. That seeled South’s fate, as they now look to bonus basketball. They play in sectional semifinal action on Wednesday at home against Ripley.

“It is what it is. We played hard again,” coach Dobson remarked. “We’ve just got to play better. We had a couple plays drawn up (toward the end of the game), and we didn’t make the right pass. That kind of thing just happens. We played good defense, too. They recover very quickly. They get over (losing) very fast, so we’ll be ready for sectionals.”