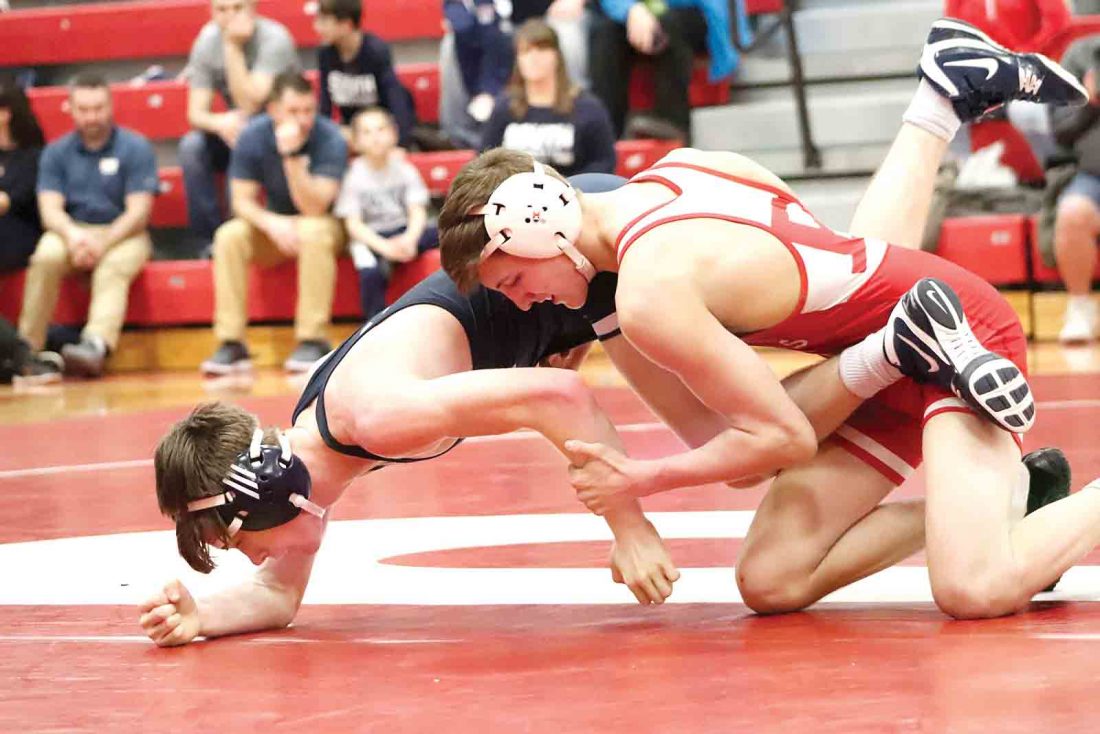 Photo by Joe Albright Parkersburg’s Garret Donahue has the No. 1 seed and Parkersburg South’s Devin Easton the No. 2 seed for the 120-pound class in today’s Class AAA, Region IV tournament at Huntington High School.

PARKERSBURG — When action gets underway at 10 a.m. today inside Huntington High School for the Class AAA, Region IV wrestling tournament, Parkersburg South will be out to continue quite the streak.

Since the move to Region IV from Region I in 2017, the Patriots of head coach Shaun Smith have been the lone champ with Huntington finishing as the runner-up the past three years. The last time PSHS didn’t win its regional was in 2008 when Wheeling Park captured Region I.

“I think with where our seeds are at we have a great shot at it. That’s the goal,” coach Smith said of winning a dozen straight regional crowns.

“That’s what we are trying to do. If they wrestle well it will be no problem and I think it’s definitely something that can happen for us.”

Top-seeded Patriot 152-pounder Brayden Roberts is the only local looking to secure his fourth regional title. Parkersburg’s Noah Inboden has the second seed.

While 42-0 Braxton Amos has the top seed at 220 with Cabell Midland’s Zach Dillon holding the two, the Patriot is trying to three-peat in his weight class at the regional.

South’s Brayden Johnson (top seed at 132) and Gavin Quiocho (top seed at 145) along with Ian Irizarry (two seed at 138) are seeking their respective second regional titles. Irizarry is seeded behind Big Red Bo Moler, who was a regional champ as a sophomore.

Parkersburg’s John Martin Best and Garret Donahue are going after their second career regional titles for head coach Matt Littleton. Best is the No. 1 seed at 160 with a 31-2 record while Donahue has the top seed at 120 followed by Patriot Devin Easton and Ripley’s Brett Haskins.

“We emphasize and like our guys to visualize wrestling the match through their mind a little bit to kind of get the mental side of things going into this tournament,” said Littleton, who also has a top seed at 182 with Chace Mathess.

“On a perfect day, I think all 12 could make it out,” Littleton said of all the members of his squad finishing in the top four to advance to state at the end of the month inside Huntington’s Big Sandy Superstore Arena.

“We need to wrestle at a high level to make it out. We have one of the toughest regionals in the state, without a doubt.”

Parkersburg South’s other top seeds are 113-pounder Nathan Ford and heavyweight Gabe Hendershot. The Patriots also boast No. 2 seeds in 106-pounder Brady Roberts, Trent Jones at 126, Casch Somerville at 170 and Noah Buckalew at 182.

Aside from 35-6 Ripley senior Austin Boggess at 195, the other top seeds for the regional are Huntington’s Jaishawn Lyles (106), Alex Viars (126) and 170-pounder Austin Dempsey.

“There’s going to be some tough matchups and we’re in a tough regional,” coach Smith added of not taking anything for granted. “I’m anxious to see how some of our less experienced wrestlers will do. We have a lot of new starters this year and some of them are a little older and some of them are freshmen.

“They’ve been working really hard this week. If they wrestle well it’s going to be a very positive weekend for us and hopefully sets us up pretty well for the state tournament.”