Crusaderettes improve to 20-0 on the year 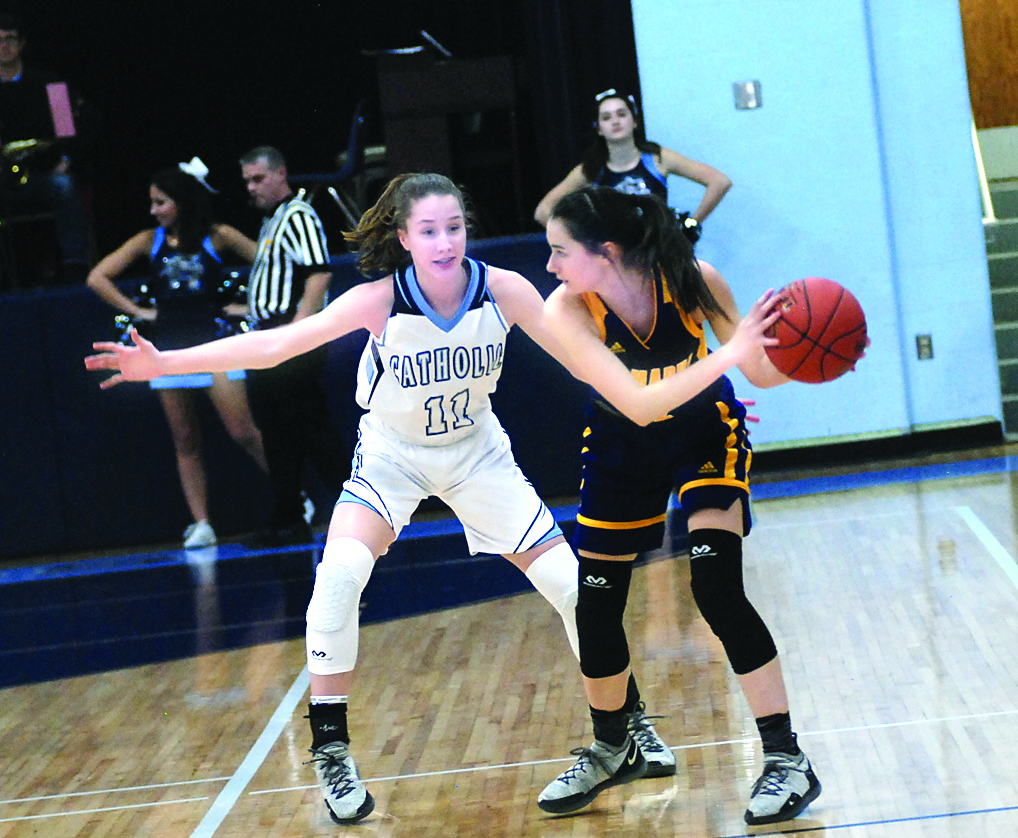 PARKERSBURG –Madeline Huffman and the Parkersburg Catholic Crusaderettes delivered on an emotional Senior Night, as they rolled past St. Marys in a 76-36 romp on Tuesday evening.

The victory firmly places PCHS at 20-0, and they head toward a collision course with second-seeded Gilmer County for the Little Kanawha Conference Championship. St. Marys needed a win to make it to the LKC Night of Champions, but their aspirations for an appearance in the third-place game were dashed by Class A’s No. 2 Crusaderettes. Instead, the 12-7 Blue Devils fight for fifth place in a Thursday night road test against a Calhoun County team firing on all cylinders, as Calhoun is a winner of 10 of its last 12 games. The Red Devils also defeated the Blue Devils in last Saturday’s WVHIT Championship with a 61-47 final score.

Huffman chipped in 16 points and 17 assists in the victory, and she proved the moment wasn’t too big for her.

“It’s always great to play with everyone because they’re so unselfish,” Huffman said of her teammates. “They’re always willing to give up the ball in big moments, and it means a lot to me that they looked for me to score tonight. There were happy tears. Just seeing everyone that I have in my corner come out and support me meant a lot.”

Not to be outdone were Leslie Huffman and Aaliyah Brunny. The younger Huffman led the way in scoring with 22 points, and Brunny was close behind with 18. Catholic’s top three scorers made St. Marys pay in the first half, which led to PC doubling up the visitors, 42-21. A balanced scoring night for SMHS didn’t provide enough to keep pace with their rivals, as Zoe Davis finished with a team-high 10 points. The deficit ballooned in the second half thanks to a 24-2 third quarter in favor of Catholic. St. Marys’ Hashman collected her team’s only basket of the frame with 7:20 on the clock, and they didn’t score again until Kylie Wright got a shot to drop with 7:28 left in the game. The struggles of the SMHS offense come days after they fell to Class AA giant North Marion in a 67-59 loss on Feb. 3, and head coach Howie Meeks noted the reasons for the drop in production. According to Meeks, a big part of why the team is in this current position was the inability to win when it was needed the most.

“Had we beaten Ritchie County in Ritchie (a 45-41 loss on Jan. 11), we’d be playing in the Night of Champions, but we didn’t take care of our business that was in front of us,” he remarked. “In our conference, everybody plays hard. Most importantly, I just want to congratulate Maddie Huffman. She’s the LKC Player of the Year from last year. For it being an emotional night and for her to have her head in the game and lead her team was big. This was Maddie Huffman’s night.”

Catholic head man Marty Vierheller had plenty to say about his standout senior and how the team is shaping up ahead of an 8 p.m. Saturday marquee matchup against Gilmer inside Glenville State’s Waco Center.

“I’m not afraid to say this. I get really emotional talking about Madeline,” Vierheller said. “She is an extremely special young lady, and I’ve said many times that she is a fantastic basketball player and an even better person. In my opinion, I truly believe she is one of the all-time greats to come through here. Words like that don’t come out of my mouth very often. She is one of the best to wear Columbia blue and white. (On the topic of the LKC Championship), Amy Chapman is one of the best coaches around, and when you’re a state champion coach, she is going to take what happened when we played them a number of weeks ago, and she’s going to use that to her advantage. She’s going to have her team well-prepared, and that concerns me. We love to compete against each other, and she’s going to have her girls ready.”