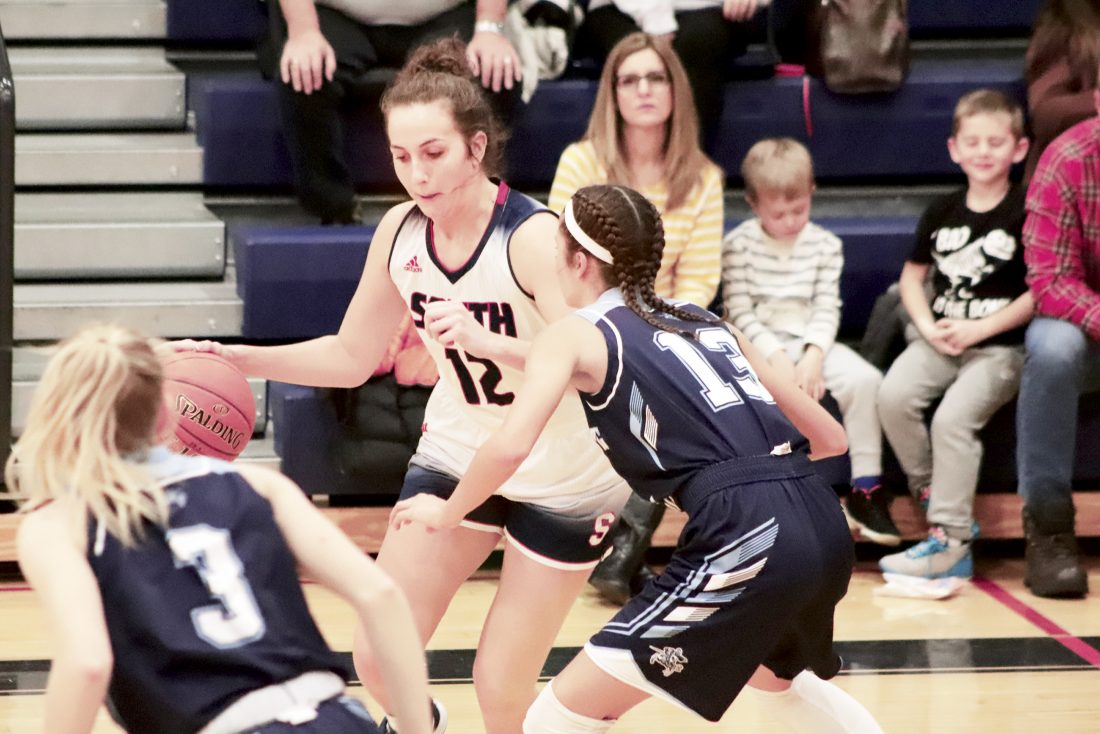 Parkersburg South’s Makenna Winans works on Parkersburg Catholic’s Aaliyah Brunny during a 2019-20 regular-season contest. Winans continues playing up to her Class AAA All-State First-team level despite a rough season for the Patriots. Photo by Joe Albright

Makenna Winans was always the key.

There’s no getting around this in understating her importance on the hardwood for the Parkersburg South girls team this season. If you wanted to call her one of the most crucial players in the state, it wasn’t an outlandish statement, either.

With a schedule as daunting as theirs (some have called it the toughest in-state schedule this season) having a leader capable of leading by example was paramount. One capable of handling the bulk of the dirty work, the rah-rahs, and emotions of a young team with a new coach.

Honestly, there existed only one candidate for the job. Winans, though, didn’t have some of the luxuries that most of her other returning all-state first team teammates had. There wasn’t an Amya Damon taking some of the scoring load off of Winans like Haley McClure down at Greenbrier East. Then, University returned plenty of experienced players from a state title runner-up for Ashten Boggs. Though George Washington player Kalissa Lacy’s plight with the absence of Katy Darnell presented a challenge, teammate Lauren Harmison approached 1,000 points.

And so Winans patiently carried the heaviest load as the Patriots broke in three new starters on both ends of the floor. This was mostly required as the losses and tight games quickly filled the opening contests during the gelling period.

But also, to partly show the capability of the entire team if and when the tumblers finally clicked inside the locks.

Running an offense around her provided many different advantages. “She is one of the most athletic big kids in the state and she is a hard matchup for anyone a team wants to put on her,” said PHS head coach Scott Cozzens. “She can step out and make 3s then post up. She can handle the ball and for a kid her size that is pretty rare in high school.”

This all helped ease the pain of the rough start. Her talents brought the Patriots close, but not quite over the hump. Only one bad loss highlighted the 2-10 start. Every other defeat came by single digits, but it didn’t deter her. As the Patriots kept falling, she kept raising her game night in and night out.

“Oh, she was huge. The first of the season we had to depend on her. Everyone leaned on her and expected her to have big games. The triple teams still came and she still put up 15 to 20 points. A lot of people didn’t see that “Let’s attack Makenna” plan. But now things have started to unravel and opened things up for her because other teams can’t just guard her. They have to guard the other three or four,” said South head coach Rick Dobson.

These developments allowed her to play at top speed in the most important games. Stopping her is a task only their crosstown rivals have truly achieved this season, but only in one matchup. Greenbrier East had no answer for her in both games. Huntington failed to stop her in the second half. Park, even with a big of its own, struggled against her.

And South improved drastically from and because of those games. Erin Williams now gives Dobson a second lethal scoring option. Teams are now unable to gang up on Winans because Williams drives to the basket well. Hannah Wingrove’s rebounding picked up. Point guard Skylar Bosley’s options breaking once crippling presses are greater. And all the while, each were cheered on in the huddle by Winans.

It really isn’t any wonder South fans vigorously celebrated her career accomplishments Thursday evening. She’s impacted this Patriots team to the point where a state tournament birth stands as a real accomplishment. Instead of being lost in the fog and haze like the beginning of the season.

I just hope they can also celebrate Winans’ seasonal achievements in another grand style. Hopefully, the rest of the state watched this season and kept tabs on Winans. If they didn’t …. Well, consider yourself awake now Mountain State and admire this fact: No matter how bad it got, Winans performed like an all-state player.