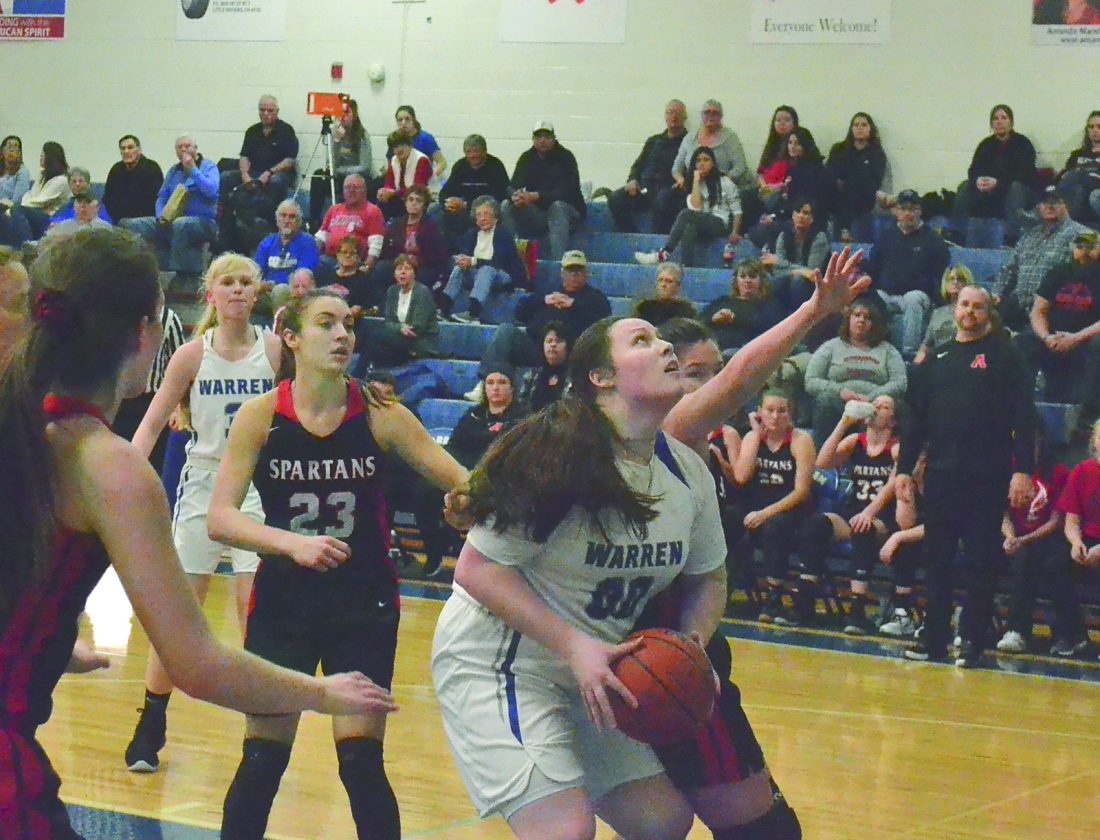 Photo by Mike Morrison Warren’s Abbie Smith goes up for a bucket during the Warriors 65-36 win versus Alexander Monday night.

VINCENT – It’s safe to say that as good as the Warren Lady Warriors have played all season that they are still a team improving as the season goes along.

Monday evening the Warriors hosted an Alexander team that they beat by a single point in their season opener and dismantled them in the opening half en route to a 65-36 victory.

Warren jumped out to a 16-8 lead at the end of one quarter and then out-pointed the Spartans by a whopping 22-2 margin in the second half to easily roll to their 15th consecutive win.

“That was a good win for us and one of the better games we have played all year,” said Warren head coach Amy Colgrove. “Alexander is always going to be a tough battle any time you play them but we just moved the ball so well today and when you move the ball that well open shots are a lot easier to find.”

The Warriors ability to pass the basketball was quite evident as nine different players dished out at least one assist and 19 of their 25 field goals came off of an assist.

Warren made the most of those open looks as they shot 56 percent (25-44) from the floor including a blistering 60 percent (9-15) from behind the arc.

Banks had the hot hand early on for the home team as she made all three of her 3-pointers in the opening half including back-to-back triples to open the second quarter.

Freshman Alexis Frazee and senior Molly Grayson added three-pointers in the second quarter as Warren scored the first 20 points to open up a commanding 38-10 lead at the break.

The Spartans played much better in the third quarter as they forced the Warriors into seven turnovers with a full-court pressure defense but they still lost ground as Warren won the period by an 18-15 margin to increase their lead to 31 heading to the final eight minutes of play.

The Warren defense limited Alexander to just 23 percent (11-48) shooting from the floor and out-rebounded them by a healthy 33-19 margin.

“I thought our defense was tremendous and our rebounding as well,” said Colgrove, whose team improved to 16-1 with the win. “Everyone played well and came in and did their job. This is a special bunch right here.”

Leading the way for the Warriors was sophomore Abbie Smith with team highs in points with 14 and rebounds with nine while Banks and Ford each reached double figures with 11 points apiece.

Nine different Warren girls scored at least one point and 24 of their points came from off of the bench.

Alexander slipped to 10-7 with the loss, was led by Marlee Grimstead with 16 points and Taylor Meadows with 15.

Next up for Warren in a rivalry rematch at Marietta on Wednesday night against a Tiger team that they defeated 58-51 earlier in the season.

“You can throw out records and throw out everything because you know it’s going to be a battle down to the wire,” said Colgrove. “Both teams are going to play extremely hard and they are having a good season too so it should be a battle.”