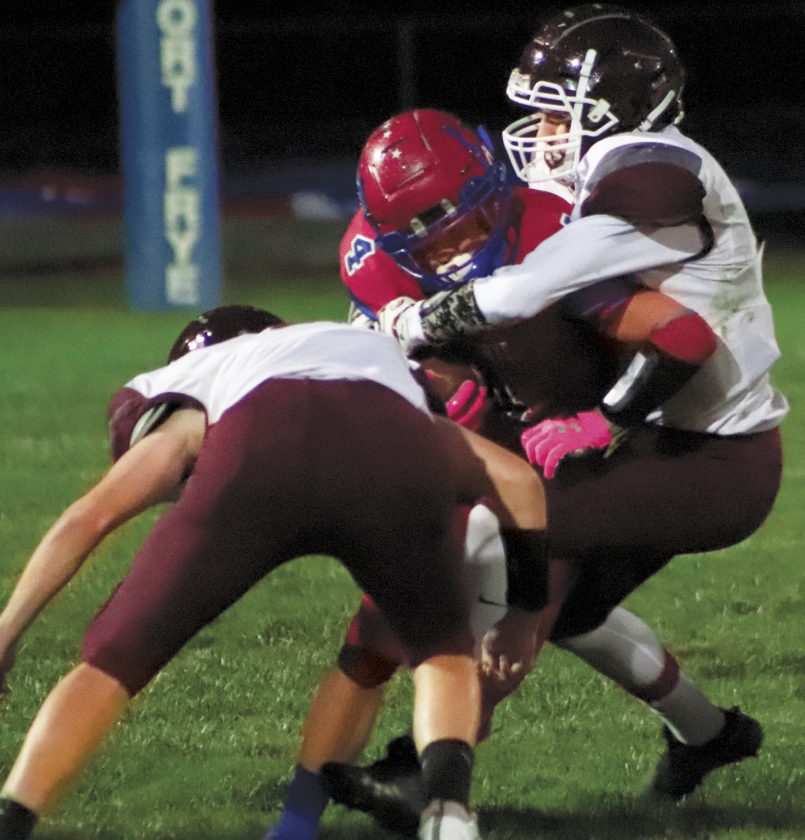 Fort Frye’s Tyler Fisher fights off tackles of Wheeling Central defenders during a regular-season game. Fisher was named to the All-Ohio first team as voted on by the Ohio Sports Writers Association. Photo by Joe Albright

BEVERLY – Fort Frye had some serious talent on the football field this season.

Isiah Jones, Tyler Fisher, Brady Schilling and Dylan Hart all were named to the first team in Division VI by the Ohio Prep Sports Writers Association.

Earning a spot on the third team were Braden Medley and Thomas Lenhart.

Fort Frye head coach Eric Huck was happy to see his player get the recognition they deserved.

“I’m really excited,” said Huck, whose Cadets went 11-1 and made it to the regional semifinals. “We’ve never had four first teamers. To get that kind of recognition is great. They’re all well deserved.”

Jones, a senior offensive guard, also was honored as the East District’s Offensive Player of the Year in D-VI, an impressive feat for a lineman.

“He has incredible athletic ability for a lineman,” Huck said. “We even thought about moving him to running back at one point because he is fast and powerful, but he’s so good on the offensive line. He brings a demeanor to the line of scrimmage not a lot of guys have.”

Fisher, a senior running back, was a second team All-Ohioan last season. He jumped up to first team this year after another monster season.

“He’s a big part of our offense,” Huck said.

“He’s going to be tough to replace. What made him special is his combination of power and speed. He’s not a real big guy, but he ran with a lot of power. He broke a lot of tackles and had breakaway speed.”

Schilling, a senior defensive back, could have been honored as a DB or a receiver.

“He’s been doing it for three years at corner, Huck said. “We’d have him cover who we tought was the toughest matchup, usually a tall wide receiver, the go-to guy for our opponents. He’s done a great job. He’s also a tremendous receiver. He can do it on both sides.”

Hart, a junior linebacker, was a tackling machine on Fort’s defense and was always around the ball.

“We get him for another year, too,” Huck said. “He’s got some quickness and athletic ability. He’s also very strong and gets off blocks well. He understands the game so well. He makes the read and gets there in a hurry. He’s really that guy that you expect to have a big game defensively every week.”

Medley and Lenhart, both juniors, each played defensive end for the Cadets.

“We weren’t sure what to expect from Lenhart,” Huck said. “He didn’t start on varsity last year. He came out and was better than we anticipated. Both him and Medley were good run stoppers. We knew Medley would be a good pass rusher. Lenhart played with a lot of heart and was a pleasant surprise for us.”

In Division VII, Waterford made a postseason run for the fourth straight season.

Crucial to the Wildcats’ success this season was senior quarterback Zane Heiss, who was named first team All-Ohio.

Heiss, also named the D-VII Southeast District Offensive Player of the Year, was Waterford’s go-to guy. His ability to make plays with his arm and his legs was his biggest strength.

“He’s a dual threat for us,” said Waterford head coach Eric McCutcheon. “The kid has just come on and on. He hasn’t played quarterback full time until this year. That’s what makes him a dual threat and makes him tough for defenses to defend. He does well under pressure. He’s had a really good year for us.”

While Heiss was an impact player for Waterford’s offense, junior Joe Pantelidis was a force on defense for the Wildcats. Named second team All-Ohio, Pantelidis was a hard hitter and play-maker from his linebacker spot.

Barnhart was a hard-nosed runner and a reliable receiving option out of the backfield for the Cougars, who showed drastic improvement with a 7-3 record this season.