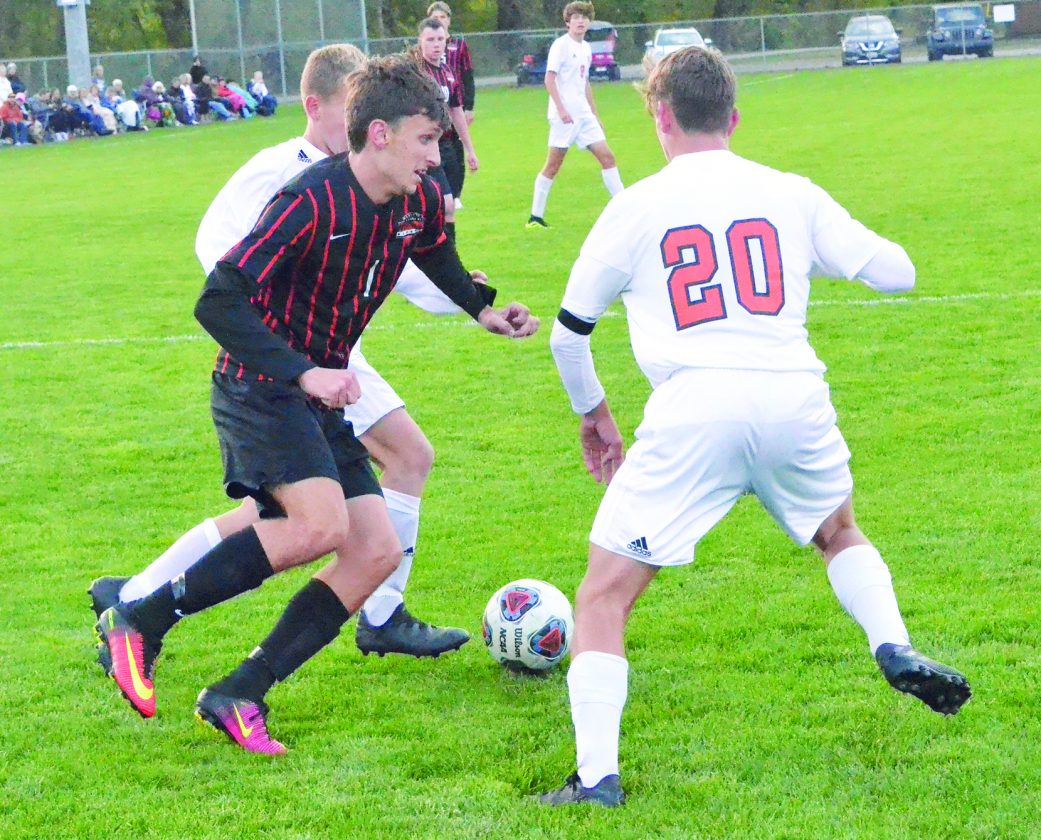 Photo by Ron Johnston Marietta’s Jake Craven battles a pair of defenders for possession of the ball during a high school boys soccer match earlier this season at Jerry Brock Field in Devola. Craven was named first team All-Ohio.

MARIETTA — Co-captain Jake Craven was hoping to finish his Marietta High soccer career on the pitch — preferably in the state finals at Mapfre Stadium in Columbus.

Instead, the talented MHS senior midfielder/playmaker was in a hospital in Columbus and scheduled for heart surgery the week the Tigers were ousted 5-1 by eventual D2 state winner Tippecanoe in a regional semi at Chillicothe High.

Happy to say, though, the operation went well, and Craven is fine.

Craven became the second Marietta High boys’ booter to be honored as a first-teamer. Wes Riley, who later starred at Marietta College, was the first in 2010.

“This is the result of an incredible senior season as he helped lead the Tigers to a first ever unbeaten regular season and a school record 19 wins,” said MHS head coach Todd Morris, who guided the Tigers to a 19-1-1 overall mark and a repeat ECOL (East Central Ohio League) championship (5-0-1). During postseason play, Marietta captured its first district title in nine years.

Before missing the district final and regional semi, Craven had scored 16 goals and had a school single-season record 22 assists. For his efforts, he was voted the Southeast District Player of the Year.

“Everything that I expected out of the season, I knew from the very start that it was going to be a great one – undefeated of course and nothing less,” said Craven after the Tigers completed regular season play on Oct. 12. “Every single one of these players on this team is a brother to me, and I couldn’t have spent this season with anyone else. I totally expected this out of us.”

During his career, Craven scored 44 goals and had a school record 54 assists in 70 matches. Along with being All-Ohio and district POTY, he was also a four-time all-district and three-time all-league honoree.

Benefiting from many of Craven’s passes and crosses was Mannix, who finished his season with a school record 40 goal, along with eight assists.

“It’s sweet but I couldn’t have done it without my teammates passing me the ball,” said Mannix after scoring his 29th goal to set the school’s single season standard against Logan on Oct. 8.

Against Coshocton on Sept. 3, he had six goals, a single game school mark.

Mannix finished his career at MHS with 54 goals and 20 assists in 74 matches played. He’s also a four-time all-district and three-time all-league honoree.

“Ryan was so good all year, being moved to the number 9 (forward) position and being asked to finish more inside of the box, and he so delivered,” Morris said. “Just an epic season for him with how efficient he was with his looks on frame.

“We knew we had the talent to get him the ball on dangerous areas, and he responded with a huge season.”

“To have two All-Ohio honorees from southeastern Ohio is so rare, and just shows to the quality of the side we put onto the field in 2019,” Morris said. “What a fun, memorable run we had.

“What a pleasure to work with and coach the last four years. Both of them, just great talents and great young men.”