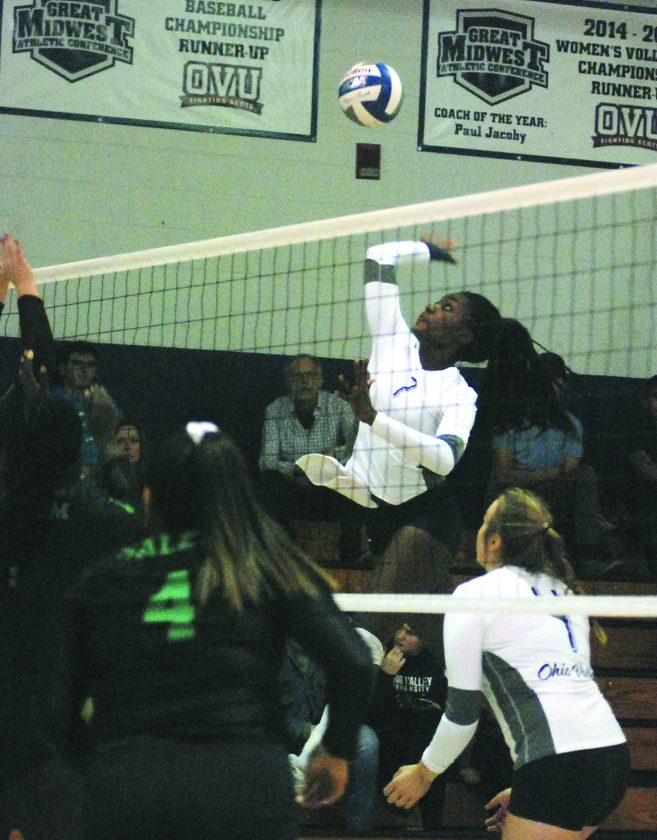 VIENNA–Riding a four-game losing streak heading into a non-conference meeting with the Salem Tigers Tuesday night inside the Snyder Activities Center, the Ohio Valley Fighting Scots picked up their ninth victory on the season, winning in three straight sets, 25-14, 25-19 and 25-11.

It’s the second sweep against the Tigers for Ohio Valley on the 2019 season, with the first meeting occurring at Salem on Oct. 1.

A constant presence at net the entire night, senior Yolaine Lopez had a game-high 16 kills and scored the winning point in the first and second set.

Senior Jessica Rafay did her part in the process also, racking up nine kills and two blocks, along with seven kills from junior Taylor Sheppy.

Feeding the Fighting Scots hitters with playable sets was sophomore Alyssa DeSplinter and freshman Julia King. Both underclassmen finishing with double-digit assists, DeSpinter with a team-high 16 while King had 13.

The Fighting Scots also had 11 points from the service line, with freshman Shayne Sanders having an impressive five aces to go with three from senior Carolina Ramirez and King.

The opening set of the match saw the Fighting Scots jump out to 10-3 lead off two kills and a block by Rafay and a kill by fellow senior Charlotte Ansel before Tigers head coach Ashley Ziegle had to call timeout.

The timeout worked for the visitors, but the Tigers were unable to dig themselves out of the early hole as Ohio Valley closed out the first set on a 15-11 run.

Lopez had three kills during the run, including the final point, giving the Fighting Scots the 25-14 win.

Miscues cost the Fighting Scots points in the opening of the second set as the Tigers scored four of the first six points off Ohio Valley errors in the second set.

Salem was unable to pull away from the hosting Fighting Scots even with having a four-point lead twice in the set. Ohio Valley took the lead late in the set off a kill from both Rafay, Sheppy and three kills from Lopez to close out the second set on a 5-0 scoring run to hold on for a 25-19 win.

In the third set, Lopez posted five kills and Sanders added three aces in the Fighting Scots’ 11-0 run to firmly pull away before a kill by Tiger Anna Veryser stopped the Scots’ scoring run.

Rafay’s kill off an assist from freshman Julia King scored the match’s final points, giving OVU the 25-11 win in the final set.

“We’re communicating well out on the floor, and I think when our kids were locked in. They served really well and that led to a lot of scoring runs, like Shayne Sanders’ big scoring run,” Sano said. “Yolaine is always impressive. I thought our setters did a smart job of identifying blocking matchups and who to set and when to set them, so that was good. We’re a little bit off on our blocking and we were anxious, I thought, but defensively we communicated well and we were pretty fluid on defense, and that was good.”

Makhia Hinton was the Tigers’ leader with six kills. Salem got a game-high 18 assists from Kyana Cardenas.