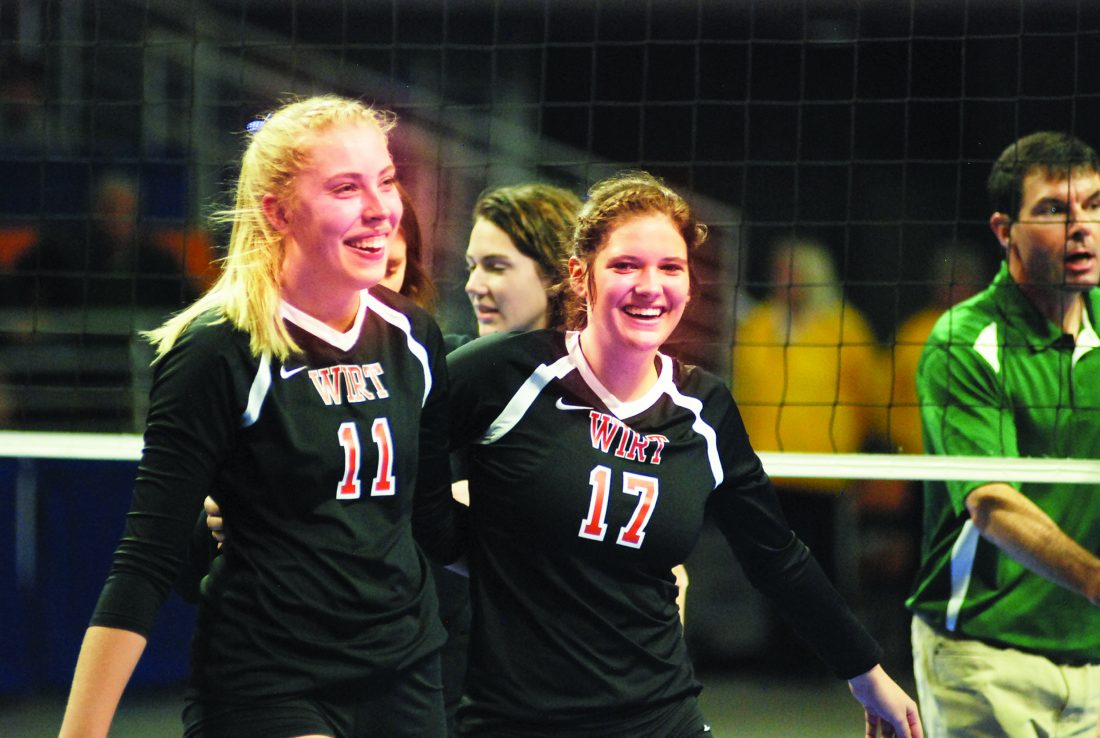 Photo by Jay W. Bennett Wirt County’s Emma Wyer (11) and Kylie Stephens (17) celebrate after the Tigers won their 12th state championship earlier this month at the Charleston Coliseum and Convention Center. Both were honored on the WVSWA Class A All-State First Team for their efforts. Stephens was named captain.

One of the key cogs in the machine for first-year Tiger boss Miriam Beall was senior Kylie Stephens, who was selected as captain of the all-state first team by the West Virginia Sports Writers Association.

“Kylie is a powerfully skilled player whether she is being asked to block, hit, serve or dig,” stated Beall of the three-time first team all-state honoree. “If you take away cross court, she is going to go line. Kylie can hit cross court, line and a cut shot. She can read the hitter to make sure she is positioned correctly.

“She can pick out the holes and aim for them whether serving or hitting. With a strong top serve, Kylie finished the season with 95 aces. It’s nice to have someone who hits hard because our girls are not as intimidated by another opponents’ hard hitter. This helped our team be ready for strong servers and hitters that we encountered.”

Pilant was an integral part of the Blue Eagles’ 2018 state championship squad, but MHS failed to make it out of sectional play as returning first team all-stater Mady Winters was lost for the season due to a knee injury. Pilant mashed to the tune of 887 kills, 354 digs and 200 blocks.

Lowers surpassed the 2,000-career dig plateau this fall and helped PCHS reach the state semifinals for the second straight season.

Much like Pilant and Winters were a one-two punch last fall for the Blue Eagles, the same held true for Wirt County this year. Tiger junior Emma Wyer, a second team selection in 2018, earned a first team nod after posting 22 assists, 41 aces, 97 digs, 143 blocks and 321 downed spikes while hitting .394.

The runner-up Wildcats, who became the first squad in Paden City history to reach the state tournament, were represented on the first team by juniors Hope Weber and Mallory Yeater. Weber, who was second team as a sophomore, hit .520 and tallied 567 kills, 31 blocks, 45 aces and 248 assists. Along with hitting at a .340 clip, Yeater produced 81 aces, 680 assists, 310 kills and 351 digs.

Also moving up from the second team last fall was Parkersburg Catholic setter Jenna Boice, who surpassed 2,000 career assists. The junior not only had 20 blocks and 47 downed spikes, but she had 76 aces, 112 digs and 964 assists.