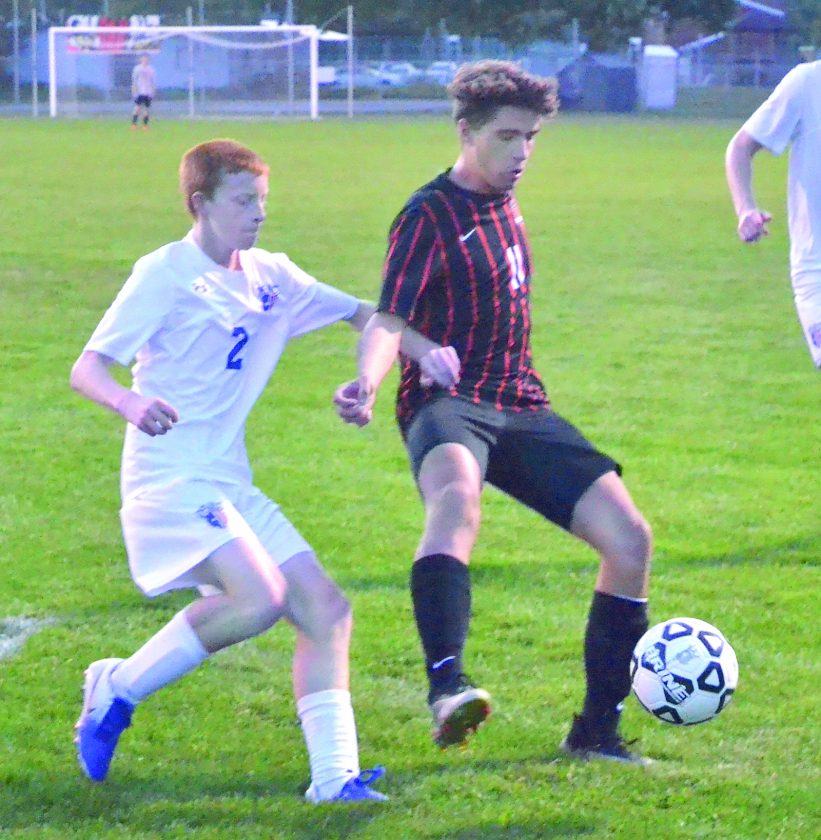 Marietta High got some partial payback against Athens High during the regular season when it blanked the Bulldogs, 6-0, at Jerry Brock Field on Sept. 19.

Now, the Todd Morris-coached Tigers, No. 8 in in the OSSCAA State Poll with a 17-0-1 record (5-0-1 ECOL), will be looking to end Athens’ 2019 boys’ soccer campaign (just like AHS did to MHS, 2-1, in last year’s postseason match) in an Ohio Division II district semifinal at 7 p.m. today at Logan High’s Chieftain Stadium.

In today’s other semi at 5 p.m. at LHS, Alexander is scheduled to face Jackson.

The semifinal winners are then slated to play in a district final at LHS Saturday.

One of those semi winners is probably going to be top-seeded and favored Marietta.

If you haven’t seen the Tigers on the pitch this fall, you’re missing something pretty special.

I mean, these guys got game, and are a treat to watch.

They have unbelievable foot skills and move the ball around on the pitch, almost like a pro team. And, no team is a better finisher than they are.

This season, Marietta has put the ball into the back of the net a school-record 118 times. Think about that for a moment. That’s an average of 6.56 goals per match.

“We are moving the ball around and we are dangerous. Everyone is getting theirs.” said Morris.

Athens “limited” MHS to six in the first meeting, so I guess the Tigers were a hair “below their average” that evening.

Of course, the ‘Dogs didn’t help themselves by going scoreless, either.

Marietta has five double-digit scorers on the team in Ryan Mannix, co-captain Jake Craven, Sean Fournier, Ethan Feathers and Cade Gandor. Overall, 12 players on the roster have scored at least one goal.

Needless to say, the Athens defense will be stretched to the max.

“I think much like every game so far if we are able to control the tempo of the game and maintain possession of the ball for the majority of the match and pin back Athens on their defensive side of the field we will be successful,” said Morris.

Mannix leads the scoring parade with a single-season, school record 38 goals. He got three of those in the Tigers’ 6-1 triumph over Hillsboro (6-11-1) this past Saturday at JBF.

Mannix also had a hat trick in the first meeting against Athens.

Craven, the school’s all-time assists leader, is one of two players on the team with a double-double in goals and assists on the season. He usually but not always takes the Tiger corner kicks.

Fournier is the other player on the squad with a double-double in goals and assists. He takes most of the direct (free) kicks on the pitch, and is very accurate with his shot. Against Waverly in a sectional semi, he was 3 for 4 on free kicks (two direct and one penalty).

Both Feathers and Gandor are positioned on the right and left wings, respectively — and they’re always hustling and battling for the ball.

Let’s take a look at some of the other starters.

The other midfielders are Kamden Lankford and Cayden Wheeler. Both are very talented ballhandlers, and won’t hesitate to shoot if they’re open.

In my opinion, all 11 Tiger starters are worthy of All-Ohio accolades.

MHS also has good depth. Usually, David Sarver and Dillon Meagle are the first ones off the pine.

And, last, but certainly not least, Marietta is well-coached. Assisting Morris are Colten Holdren, Keith Schwendeman and Bill Mannix

“We have a really good coaching staff and a great relationship with our players and have the same great goals in mind and we always want to put players in position to succeed. We promise we will never the players we will never get outcoached and put the same amount of work in and same prep time in practice as for game time.”

Athens is a longtime Marietta rival on the pitch. So, the Tigers won’t be taking the Bulldogs lightly. Every Tiger will be well prepared.

“Our players expect to be out on the field for 75 to 80 minutes. We train and condition heavily in June and July not only with distance running for stamina but with the dam run in Devola,” said Morris.

Morris spoke how they would like a lower scoring game and he doesn’t think Athens can afford to get in a shootout with the Tigers. Danny Getz does lead a power Bulldog offense, but he didn’t score and had just two shots on goal back in September.

But to be honest with you, I’ll be surprised if the match is close.

‘The team is so senior heavy and they have been so focused on not only starting the season at Crew Stadium but ending it there Nov. 10 of 11. And this is such a talented group that is ready to take the next step beyond the district tournament.”