GAMEDAY: 3-0 in sight for the Patriots 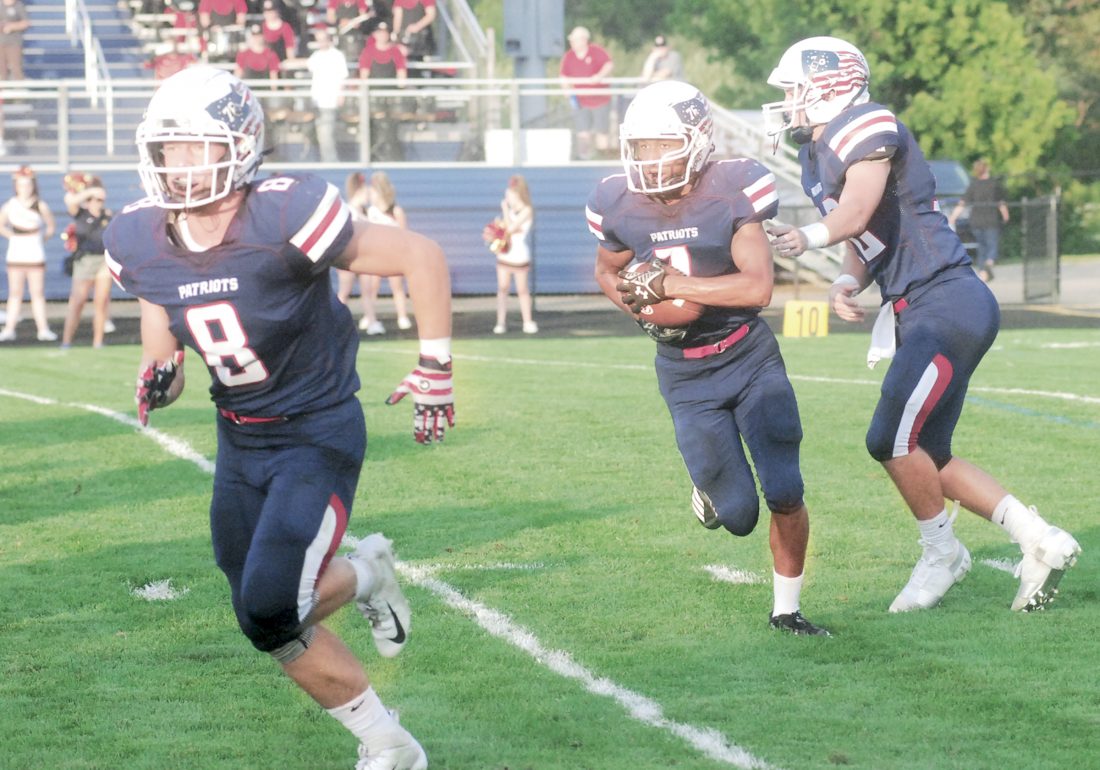 Photo by Jordan Holland Parkersburg South’s Brandon Penn takes a handoff from Patriot quarterback Brayden Mooney while Nick Yoho prepares to block during a 2018 regular-season game against University. Penn and company welcome Athens in and look for a 3-0 start at 7 p.m. Friday evening at Erickson All-Sports Facility.

PARKERSBURG — A golden opportunity for the Parkersburg South Patriots to start 3-0 is at stake in the team’s first home game of the 2019 season. The Athens Bulldogs come to the Erickson All-Sports Facility to take on the upstart Patriots, and when the ball is kicked off at 7 p.m. this Friday night, several players have a chance to keep adding to this hot start for the team.

Head coach Nathan Tanner is a win away from starting his South coaching career off 3-0. He would be the first South head man to start 3-0 since Lou Nocida did it in 1990. Still, Tanner doesn’t want to get too far ahead of himself, as he wants to just take care of business in his Erickson coaching debut. If they play like they did against University, He expects the same result.

“I thought the kids came out and played fast. They really took care of business in all three phases: offense, defense and special teams,” Tanner said of last week’s victory.

There is reason to believe in Tanner’s offensive capabilities. In two games, the Patriots outscored their opponents, 97-32. That starts with the squad’s approach to spreading the ball around. While certain aspects of the gameplan are sure to change, the standouts stay the same. The responsibility of sharing the offensive production isn’t a problem for this team, as coach Tanner explained.

“I’ll be honest with you. The way our system works, I wouldn’t say it’s hard (to spread the ball),” he said. “It runs on how the game flows, and how we call plays, but we’re not solely dependent on one or two guys to produce.”

Part of that success is due to the weapons around quarterback Brandon Penn. He impressed in his first start against Ripley, and he followed it up with quite the performance against University. A pair of rushing scores from the dual-threat opened the game up early, and a passing touchdown from the senior put a bow on his performance. The Patriots ran wild and amassed 528 total yards of offense, and it was thanks to plenty of pieces.

Devin Gaines goes into week 3 after 130 yards on the ground against the Hawks, and a spread-out passing attack got Levi Rice and Dylan Day in on the action with 11 catches between them. Tanner expects them to keep producing, as he said it was “easier when veteran players buy into the system.”

Jeffrey Tucker led the way on the front line defensively for South, and Tanner looks for more of the same against the winless Bulldogs. A couple large interior linemen for the Bulldogs could prove to be quite the task, but Tanner is confident in his pass rush.

“Athens has an air raid attack. If we slow their run game down, it’ll force them to throw on virtually every play,” he said. “Something I tell our kids and coaches is that the best pass defense is a good pass rush.”

The season is still early, but South is taking shape and giving fans a lot to cheer about in this new era. If everything comes together against a struggling Athens team, they’ll have even more to celebrate.