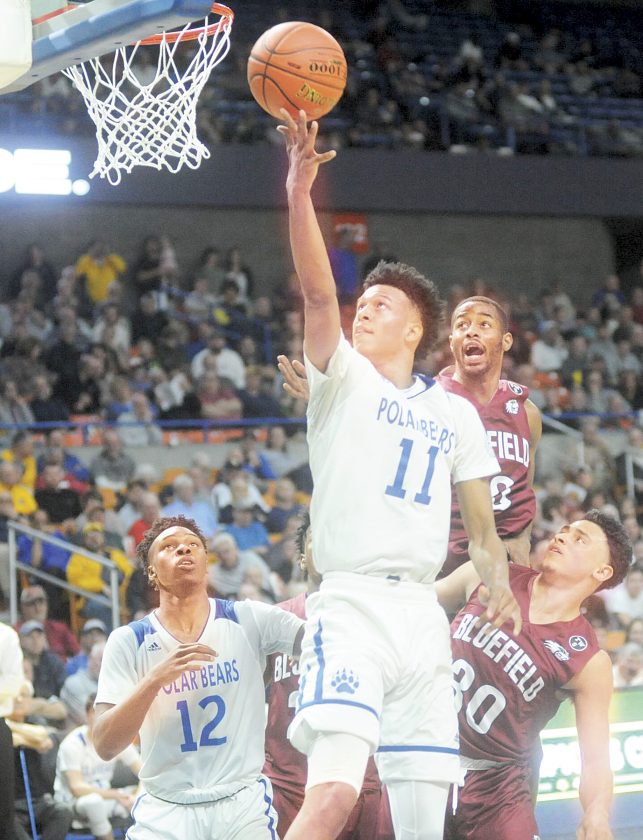 Photo by Bradley Heltzel Fairmont Senior’s Jalen Bridges finishes a layup during a boys basketball state semifinal game against Bluefield at the Charleston Coliseum and Convention Center earlier this month.

FAIRMONT — Jalen Bridges disagreed with the label and was irked by the stigma. In his mind, the critics were wrong. Their perceptions that he was too cavalier as a player and too passive as a competitor were warped by his willowy build, relaxed disposition and silky-smooth overall game and nothing more.

In the summer between his sophomore and junior seasons, however, the Fairmont Senior forward had a revelation: What if there was a bit of truth to those thought-to-be falsehoods? Bridges looked inward, assessing the player he was and the one he ultimately wanted to become.

“That’s really when I sat down and thought about what I wanted to be and how I wanted to play,” he says now looking back.

A reality as a knockdown spot-up shooter and a demure role player, capable of contributing to games but not commanding them would no longer suffice. Bridges wanted more, much more. He went to work, strength training and conditioning before school in the morning and grinding through individual skill development sessions with his dad, Cory, after practice in the evenings. Bridges transformed himself into a true on-court killer.

“It’s just a mentality once I step across those lines,” he said. “I don’t care who you are. I don’t care if you’re my friend.”

Bridges’ rapid rise led to a spot on all-state first-team as a junior, with the Polar Bears advancing to the Class AA state title game in the process. He repeated both feats this season as a senior, but he has earned another honor to go with them. Bridges has been selected as the 2019 winner of the Bill Evans Award, given annually to the state player of the year, as chosen by the West Virginia Sports Writers Association.

Bridges is the second straight Fairmont Senior player to win the Bill Evans Award, which is named in honor of former Fairmont Times publisher Bill Evans. Taevon Horton won it last year before committing to West Virginia University as a preferred walk-on.

Several players from across the state were considered for the honor this season, with George Washington senior guard Bunky Brown, University junior guard Kaden Metheny and Chapmanville junior big man Obinna Anochili-Killen all receiving votes for the award as well.

Bridges averaged 22.2 points a game, 6.3 rebounds, 1.8 assists, 2.0 blocks and 1.9 steals in 25 games before the state tournament, and once he got to Charleston, he tied for the lead amongst all players in points per game at 16.5 while earning all-tournament team honors.

All of the numbers, accomplishments and accolades are a byproduct of that transformative summer, one in which Bridges set the path to become a player whose impact on any game never faded against any foil.

“One night when he’s not making anything, he can go rebound, he can play defense, he can set his teammates up. He has gotten the understanding that he has to do more every single night,” said his father Cory earlier this season. “He’s realizing what he needs to be to become that complete basketball player.”

Bridges’ combination of deadeye marksman and high release due to his height still makes him perhaps the state’s deadliest sniper, but make it a point of emphasis to run Bridges off the line and he’ll still burn you.

His ability to attack closeouts is good for at least one driving yam on the baseline each game. He can playmake for others off the bounce, and when push comes to shove, Bridges has the chops to operate downhill off a ball screen or set the screen himself and pop into a longball. On the defensive end, Bridges casts a large net, swatting shots as a weak side shot blocker and rebounding well outside his area. Tax with him with a legit one-on-one matchup, and Bridges can toggle through positions 1-5. He’s locked down shifty guards such as Wyoming East’s McQuade Canada, handled burly post players such as Oak Hill’s Derrick McDowell, and in the state championship game, he went toe-to-toe with Anochili-Killen of Chapmanville.

All the while, through the benefits of his defensive malleability and the merits of his offensive versatility, Bridges has molded himself to the larger picture with the Polar Bears, slotting his array of tools into coach David Retton’s system on both ends without a care for his individual numbers or recognition.

“He sees, ‘OK, how does me getting better with certain elements of my game affect our team?'” Retton said earlier this season.

The expansiveness of that optionality speaks to just how many strides Bridges has made in the game, and is a testament to his commitment and competitiveness to create the best on-court version of himself.