Look Back: Horsing around in Wood County 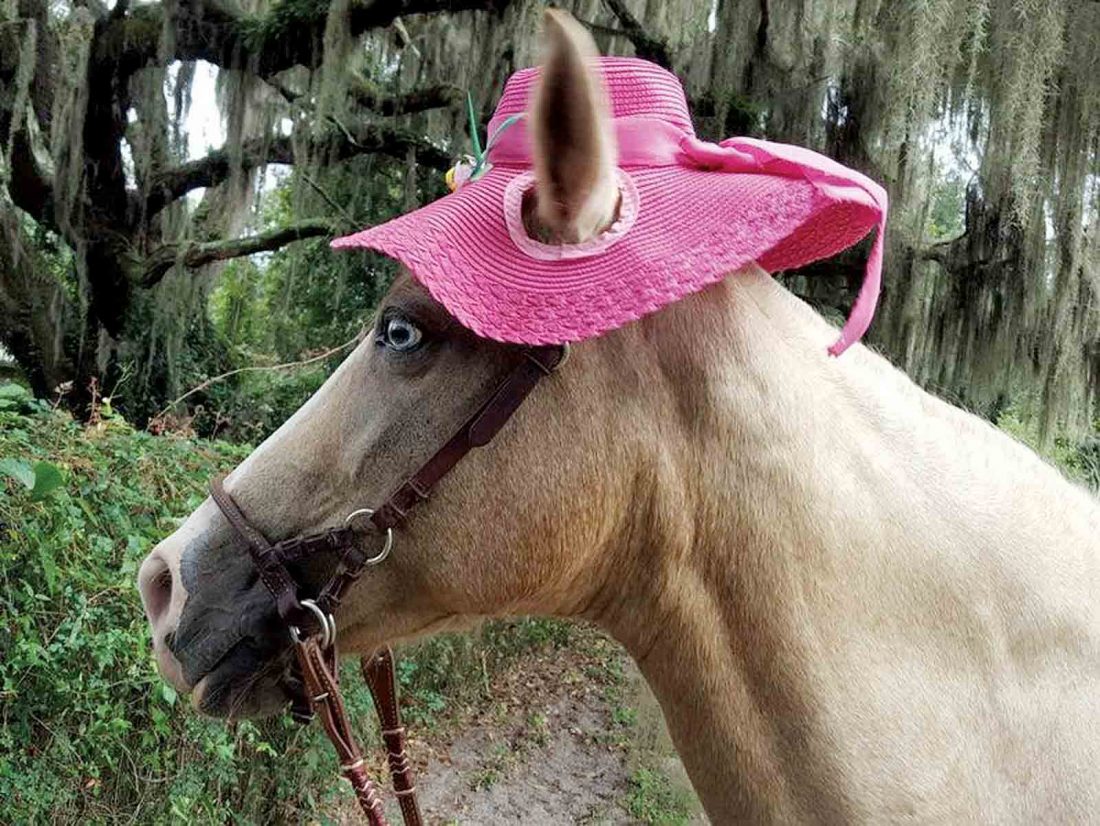 Horses were vital to the growth and development of our country, even into the mid-1900s. Most of their utility involved being in the direct sun. As strange as it might seem (or look), hats for horses might have been a good idea. (Photo Provided)

Opposite Mr. R. Steed’s farm several horses are usually kept on an extensive pasture ground. A boy on last Wednesday sauntered about and having no other mischief to do commenced teasing one of the horses, and kept at it until the horse lifted his heels and kicked him in the chest. He was carried home, supposed to have been dangerously hurt; but we are pleased to learn, [he] was considered out of danger yesterday.

We are pained to learn that our esteemed State Senator, Hon. Wm. E. Stevenson, was seriously hurt by a fall from one of his horses, at Valley Farm [near Valley Mills] on Monday last. He is said to have received a wound upon the head and internal injuries. NOTE: In 1868 Stevenson was elected Governor of West Virginia by defeating fellow Parkersburg resident, Johnson Newlon Camden.

The bees stung the horse and it bit the man!

Cumberland, Md., July 6 — William Reese, living near Millington, W.Va., met with a remarkable accident in harvesting. He was riding a self-binder, when the machine overturned a hive of bees. The bees swarmed out and began to sting the team and driver. Reese was trying to unhitch when one of the horses in its agony, grabbed him by the leg and held on until farm hands came to his assistance and pried the animals jaws open with a stick of wood. A physician was summoned, who found that a bone had been crushed. Reese is not expected to live. The horse which inflicted the injury soon died from the bee stings.

Quite an exciting runaway occurred on St. Marys Avenue near 22nd Street last evening. Fortunately nobody was hurt although a buggy was badly wrecked. Sprigg D. Camden and Richard Camden were driving out the avenue in a light rig with a high spirited horse when two street cars passed. The horse shied at the first car and when the second passed, it swung so near the side of the road that the buggy collided with a telephone pole. Both the occupants were thrown out but escaped injury.

The horse freed itself from the rig and ran for some distance before it was captured.

The buggy and harness were considerably broken.

The Washington Humane Society has been advocating the bonneting of draught horses, and has been so far successful that most of the horses used by large business firms in that city are now going about with bonnets on their heads. The headgear in question is of straw, shaped like a farmer’s hat, with two holes for the ears of the horse, and a brim wide enough to shade the eyes. It is tied neatly under the throat and may or may not have a damp sponge in the crown to keep the head of the animal cool.

Bob Enoch is president of the Wood County Historical and Preservation Society. If you have comments or questions about Look Back items, please contact him at: roberteenoch@gmail.com, or by mail at WCHPS, PO Box 565, Parkersburg, WV 26102.