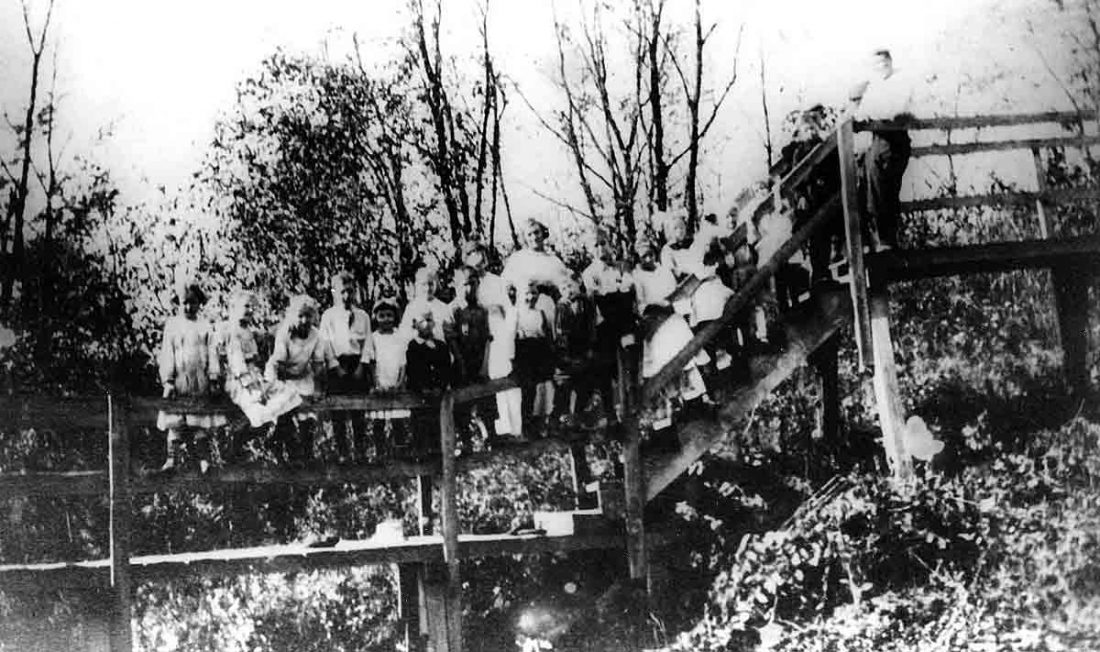 Boardwalks couldn’t always be flat! The boardwalk at Nicolette mentioned in Mr. Vaughan’s letter below, ran from the RR stop/post office about a mile to near the county poor farm. The photo above shows a class of school kids on the boardwalk as it crosses a hollow not far from the school. (Photo from the collection of Bob Enoch)

Another item from Margaret Cokeley’s column in The Parkersburg News, Pages From the Past, regarding local train service is written by Jim Vaughan. For full disclosure, it should be noted that Mr. Vaughan was the founder of the Wood County Historical and Preservation Society. Excerpts from Mr. Vaughan’s letter follow:

“The train ‘Accommodation’ was a train I rode quite often, as my grandmother bought a farm after World War I at Nicolette. I remember getting up at 5 a.m. and riding the street car down to the train station [Sixth Street] in order to get the early train, which I think left around 6:30 a.m. Being quite young, we always looked forward to the ride.

“The cars were in behind the RR station and the engine would hook on there. We boarded the train in the rear of the station in the early 20s. No sooner did the train start to move out, then someone would come through the cars selling candy, cracker jacks, etc. It took about 15 minutes to get to the first station [Stewarts Station], which was across from the Viscose, right by the dam [lock #1 in the Little Kanawha River]. It took another 10 minutes to get to Nicolette, a distance of three or four miles. At that time there was a store building at the railroad tracks and a board walk from the train tracks up the road by my grandmother’s house. There were quite a few homes along that road. The board walk was due to the fact that there had once been a good-sized lumber mill between the railroad tracks and the river. The board walk was kept in fair repair by the people living there. The road led to the County Poor farm and my grandmother’s land adjoined the grounds of the poor farm, which today is the Parkersburg Community College land.

“The train ran up in the morning and back at night. I believe that it came through Nicolette about 7 p.m. To stop it in order to ride back to Parkersburg, we had to flag it down. We used a white handkerchief, but in the winter time when it was dark, we used a flaming newspaper, which was rolled up tight and lit. Newspapers were used for a lot of things besides reading in those days.

“For a kid there was nothing like a train ride. This past winter I took a train to Washington, D.C., but nothing can ever match the thrill of those old smoky, coal-burning engines, each with its individual sounding whistle, the open windows that blew coal dust all over, the old green mohair seats, and the water tower where they filled the engine to make the steam. Life may have been a little harder back in those days, but people appreciated what they had more than they do today.”

How long did it take modern humans to evolve from our primitive ancestors? Well, Neanderthals roamed the earth ...

In my last column, I talked about the fog of war when it comes to the coronavirus. That’s why more, not less, ...