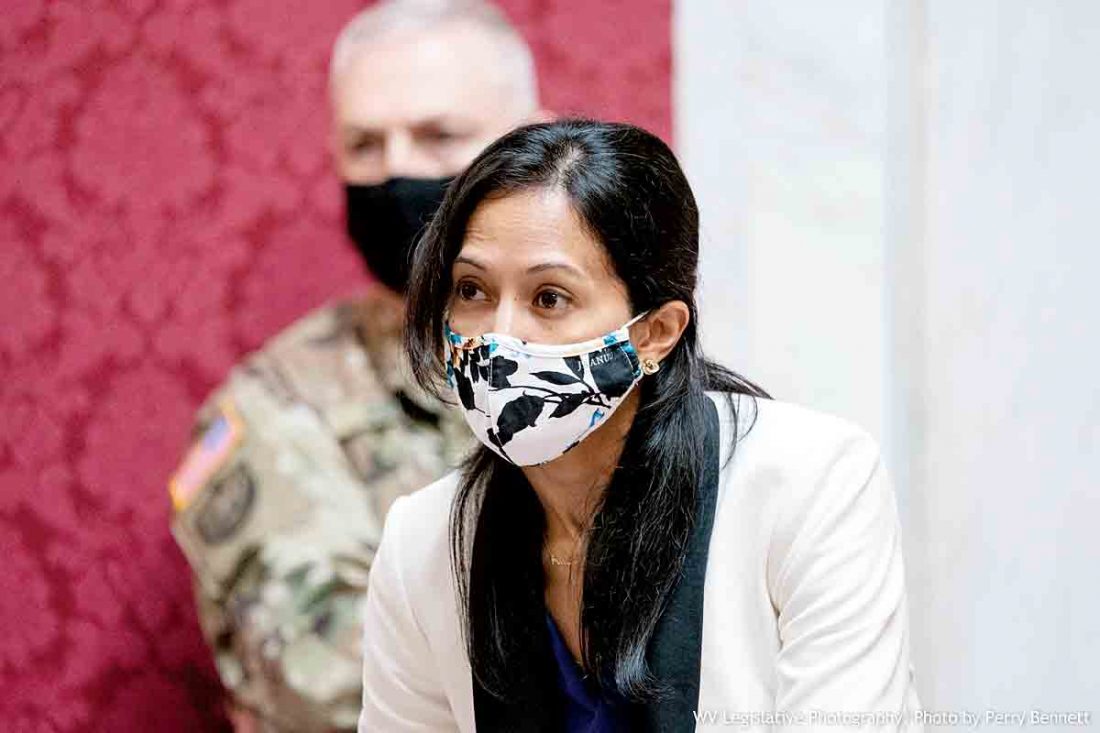 Members of the House of Delegates Health and Human Resources Committee held an informational meeting Monday morning at the Capitol, but instead of meeting in a committee room, lawmakers spread themselves out in the House Chambers to stay socially distant.

Monday’s meeting was the first time for many lawmakers to receive a direct briefing from state officials on the response to COVID-19. The 60-day legislative session ended March 7 and there have been no legislative interim meetings to date.

A week after the end of session, schools were shut down and the high school girls basketball tournament was halted due to coronavirus concerns. By March 23, the entire state was in shutdown.

Marsh, the vice president and executive dean for Health Sciences at West Virginia University, said the state did a good job of following Gov. Jim Justice’s stay-at-home order and following social distance guidelines in the spring, which helped slow the spread of the virus and helped the state stock up on personal protective equipment and ventilators.

Now, as the state enters the middle of July, coronavirus cases are up far more than what they were in March, April and May. According to DHHR, the number of active COVID-19 cases – the number of infected people in self-quarantine or hospitalized – is 1,338 as of Monday morning, a 62-percent increase in active cases in seven days. Marsh said the increase in cases is being driven by young adults between the ages of 20 and 29, which account for 23 percent of all positive cases in the state.

“We’ve seen a younger and younger group of people become infected both in West Virginia and also in the country yesterday,” Marsh said.

The spread of the virus is picking up in West Virginia, most likely to more mobility among younger people, he said.

Outbreaks also are being traced to churches where the congregation did not follow recommendations to wear masks, space out on pews, and follow other social distancing guidelines. Last week, Justice issued an executive order of all adults and children over the age of 9 to wear masks indoors in public buildings and businesses.

According to the National Governors Association, the 11 states that mandate mask wearing have seen a 11-percent drop in COVID-19 infections. In 16 states that only recommend masks, cases have increased by 84 percent.

Dr. Ayne Amjad, who was appointed as the new state health officer on Friday after Dr. Cathy Slemp tendered her resignation in June after criticism from Justice, said she wants to start an aggressive promotion campaign to encourage West Virginians to wear face masks and cloth coverings. She also wanted to find out why some West Virginians were reluctant to wear masks.

“Obviously people do not like to wear a mask,” Amjad said. “You have a group of people who do not believe in wearing a mask for different reasons. There are some who cannot tolerate it for health reasons, and there are some who do not want to wear one. We have to address those West Virginians on that end of the spectrum as well, because we cannot ignore that group of people who don’t want to wear one or who cannot wear one because either way we go, we have to keep everyone healthy on both ends of that spectrum.”

Hoyer told lawmakers about the National Guard’s efforts to source personal protective equipment – such as masks, gowns, gloves, and other gear – for hospitals and other healthcare workers. In some cases, the National Guard is supervising the manufacturing of personal protective equipment from different in-state sources, including creating 3D-printed masks at WVU, using inmates in the state correctional system to make protective gowns, and using Guard soldiers themselves to manufacture gear.

Hoyer said the goal is to be less reliant on foreign sources of personal protective equipment and ensure the state has an ample supply of gear. Even COVID-19 testing supplies are being created by the National Guard and WVU.

“We are working efforts to maintain a six-month supply of (personal protective equipment) based on hospital and long-term care facility burn rates,” Hoyer said. “Working with West Virginia University, we’ve developed our own test swabs. We’ll be producing our own test kits or transport tubes and test methods so that West Virginia – particularly going into the fall and winter – will have the ability to manage a large portion of its own testing capability. We believe that’s vital, particularly based on where we are nationally right now.”

Crouch said DHHR has had to overcome many obstacles in responding to the COVID-19 pandemic, but he believes that his staff has adapted.

“Our public health system was built to investigate STDs and HIV and we weren’t ready for this,” Crouch said. “I’m not sure any state was ready for this, but we have modified things and changed things and tried to develop better protocols in terms of doing things.”

One way the office is adapting is hiring contact tracers and improving its computer system for reporting cases. Many states, including West Virginia, were still being faxed data from testing labs. The state now has 225 contact tracers to help track down people who may have been infected.

Once DHHR implements a new software system to help keep track of all the data starting Friday, the state will have 350 contact tracers spread out between DHHR, county health departments, medical students at WVU, and members of the National Guard.

“If we don’t increase our contact tracing, we can’t tie off these positive cases,” Crouch said. “We’re really looking at beefing that number up, but we’ve got to have better relationships with the local health officers. I think we’re getting there, we’re developing that.”