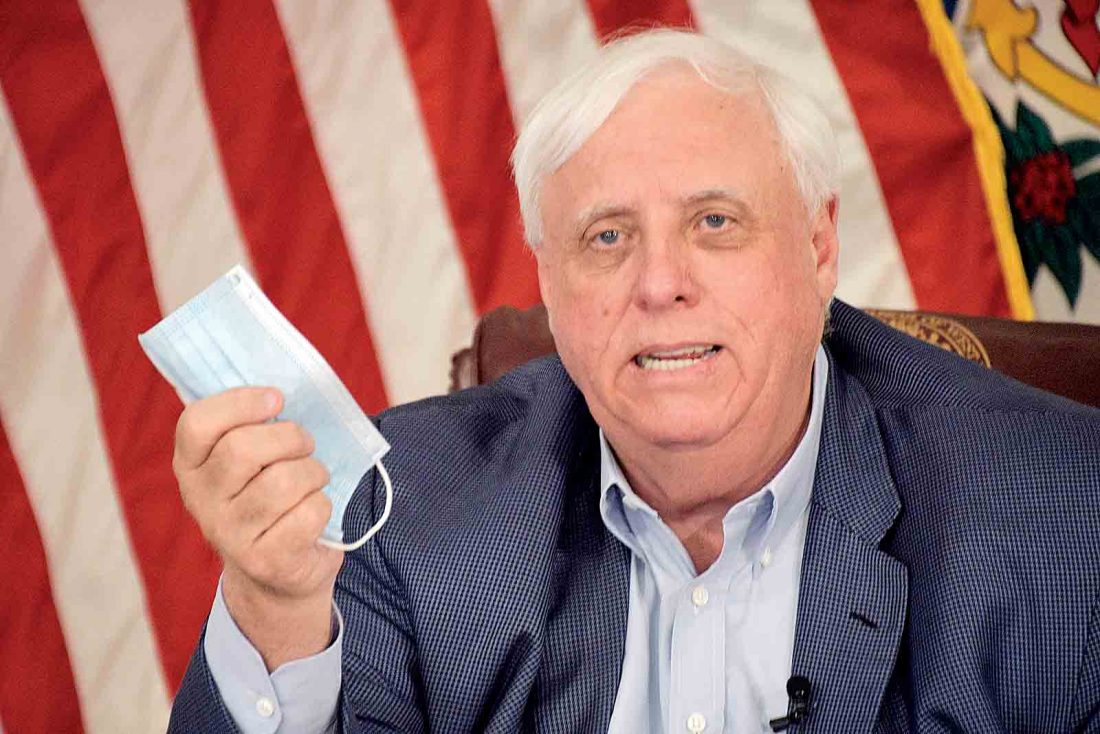 CHARLESTON — Citing an increase in active cases of COVID-19, Gov. Jim Justice announced Monday the state will again limit the size of group gatherings, fairs and festivals will close and bars in Monongalia County will shut down for 10 days to bring the outbreak in that county under control.

“I wish to goodness we didn’t have to do any of this stuff,” Justice said. “But I’m so happy today we’re not Texas or Florida. You don’t need me here reporting on hundreds or thousands of West Virginians we’ve lost.”

Speaking Monday during a briefing at the Capitol, Justice said group gatherings will decrease from 100 to no larger than 25 people. All fairs and festivals scheduled this summer also will have to cancel.

The gathering limit does not apply to outdoor pools or outdoor sporting events as long as social distancing can be maintained. It also doesn’t apply to fairs, festivals, and outdoor concerts that can limit crowds to no more than 25 people. Further guidance will be available at governor.wv.gov.

The gathering limit also doesn’t apply to churches, though some of the outbreaks in several counties have been tied to congregations not wearing face masks, sitting in every other pew and keeping within 6 feet of others. A picture circulated over social media and cited by Justice showed a large church service in Fairmont where no one was wearing a mask.

“If there is any place on the planet we should be loving our neighbors, it’s there,” Justice said. “By being in a church setting without a mask with what is going on in the state, it is exposing our friends and neighbors.”

In Monongalia County, where West Virginia University is located in Morgantown, all bars will shut down for 10 days.

Justice cited the increase in active cases in Monongalia County with college students returning. In West Virginia, young adults between 20 and 29 make up 23 percent of all positive cases in the state.

“We have a tremendous amount of students who have come back,” Justice said. “Absolutely it is an issue and problem. If we just say we’re going to study for this for a few more days or even weeks. For every day we miss, many many people who are asymptomatic are going to affect others.”

“When we look around the country and see states that are really having problems…ultimately as we see this effects that are going on in a number of states, we’re noticing consistently that more and more younger people are being affected,” Marsh said.

According to the New York Times, more than 100,000 new coronavirus cases were identified nationwide with seven states setting new records for daily infections. States with increasing cases include Texas, Florida, and Arizona.

This weekend alone, more than 5,000 people were tested, with 3,000 of those in Monongalia County.

Deaths between June 29 and Sunday totaled three while five deaths were reported between June 15 through June 28. The most recent death was reported Saturday from Ohio County, a 68-year-old woman.

“Our overall statewide numbers are still really good,” Justice said. “It can get really bad and I’m trying to prevent that from happening to us. From a standpoint of likelihood of us going back to a stay at home order or shutting down businesses and everything else today? We’re a long ways away from that. That likelihood is not very great, but I will do my job.”