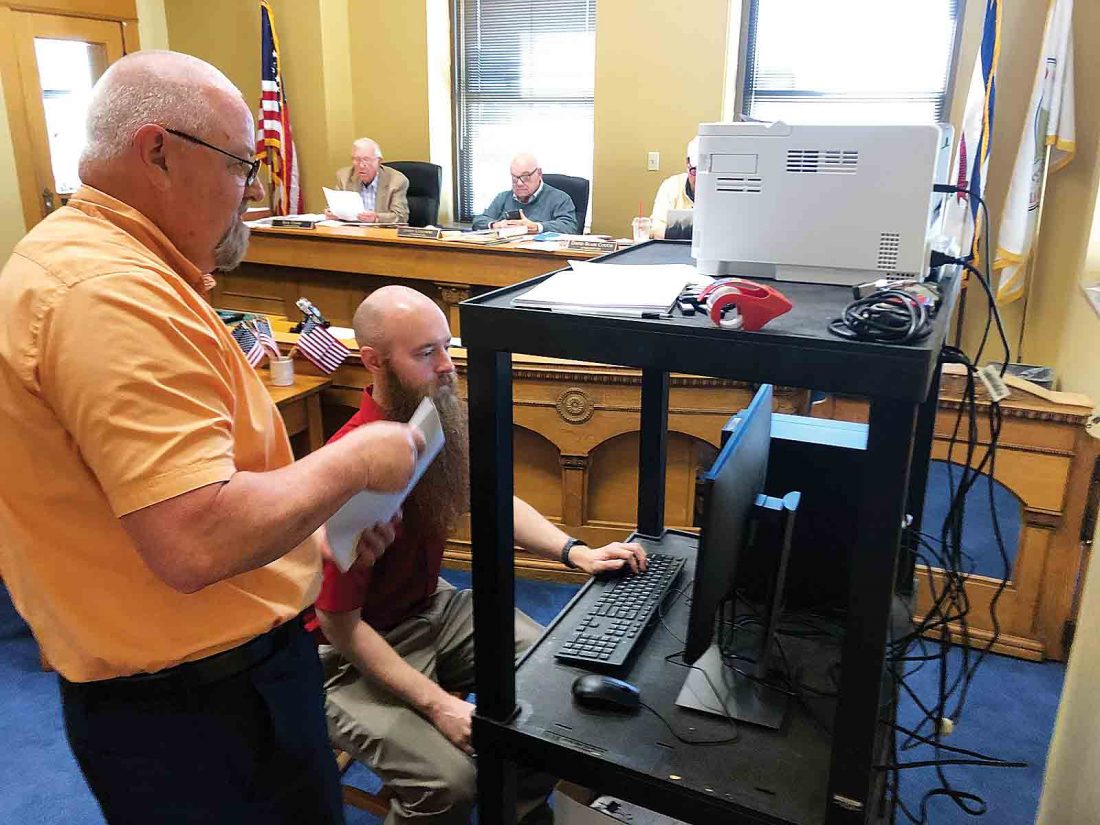 Wood County Clerk Mark Rhodes conducted a test before the Wood County Commission with Wood County IT Director Chris Whittaker of how votes would be tabulated on the Primary Election Night June 9. (Photo by Brett Dunlap)

PARKERSBURG — The Wood County Commission approved Monday a list of which voting precincts will go to which consolidated voting site for the primary election on June 9.

County Clerk Mark Rhodes appeared before the commission on Monday with the list which divides up the county’s voting precincts to the consolidated sites.

“We are shuffling the manpower around that we have to all of the locations,” Rhodes said, adding he still has enough people to man each location. He has not called in additional poll workers as of Monday morning.

Last week, Rhodes was notified by the Secretary of State that the original plan of allowing voters to go to any of the county’s original five consolidated sites to vote was disapproved and officials would have to divide up the county’s 68 voting precincts and determine which ones will go to each site.

Commissioners wanted additional people available who could sit at the traditional voting precincts to be able to direct people as to where to go. Officials feel that just leaving a sign on the door telling people where to go would be insufficient.

Rhodes said it would be a matter of how much the county would want to pay those people.

“These people would be insuring people will know where to vote, commission President Blair Couch said.

Couch believes since the voting precincts are being consolidated due to the pandemic, there would be federal money available to reimburse the county to make sure the election is conducted properly, for which these measures would qualify.

Since the county won’t have the usual number of poll workers on election day, additional money was available, officials said. Initially, officials thought that some of the poll workers who declined to work the polls due to health concerns would consider this job.

Couch said the City of Parkersburg has a plan to station off-duty police officers at city precincts to help direct people. Those officers would be paid overtime and holiday pay, which officials would believe could be reimbursed through COVID funds.

Sheriff Steve Stephens said he might be able to get deputies to man county locations, but he would not have enough to cover every location. The deputies would have to receive overtime and holiday pay, he said.

As some sites house multiple precincts, Rhodes believes they would need 38 people to man all the sites.

Officials will be checking into what might be done, seeing who might be available, if city officers could be deployed out in the county-if possible and other options.

Couch felt this option was discussed last week and he wondered why nothing was done.

Rhodes said his biggest concern is making sure he has enough people to conduct the election at the polls for the people who decide to vote in person. Some of those people have expressed interest in want to sit at a precinct and help direct people where to go.

“I have to deal with the manpower in that precinct location,” Rhodes said.

If need be, he can conduct an emergency poll worker training session within the next week.

Rhodes said he already overbooked each site in the event he had people not come which is now allowing him to move people to the additional two sites.

“I think we have a very dedicated group of poll workers right now,” he said.

The commission is concerned about the confusion that may be caused with what has happened over the past week, going from telling the public they could vote at any of the sites to now having designated sites on Election Day where each precinct has to go, Couch said.

“We need to have someone at these polling sites (to help people get to where they need to go vote),” Couch said.

He is afraid they are going to have a situation like they had in Wisconsin with people lined up along the streets trying to maintain social distancing and other recommendations while trying to get through the polls in a timely manner.

Officials also discussed that they cannot require voters to wear masks or facial coverings during voting.

“We can’t discourage voters,” Couch said. “We are not going to infringe on anyone’s freedom to vote.”

Also, they believe poll workers are not required to wear masks. They have had some wearing masks, face shields and gloves.

“We have left it up to the poll workers,” said Deputy Clerk Melody Ross.

Rhodes also conducted a test before the commission about how votes would be tabulated Election Night after the polls close and information would be brought down to the courthouse to be counted.

The county is using new voting machines this election and the information will be downloaded onto special thumb drives. The computer the thumb drives will be loaded onto will be checked election night to make sure they are cleared before the count begins.

Rhodes feels the security is similar to the previous voting system in that the voting machines and the ballot scanners are not connected to the internet or to each other. The thumb drives are also password protected. There is also a set of locks and keys the equipment is secured with.

“The software also knows how many (thumb drives) we have and to expect,” Rhodes said.

If he would try to add the thumb drives the county used for testing on Monday to the Election Night drives, it would be identified as an “extra thumb drive” as the system is programmed with how many to expect, he said.

The system would also alert them if any of the drives are not loaded into the system, Rhodes said.