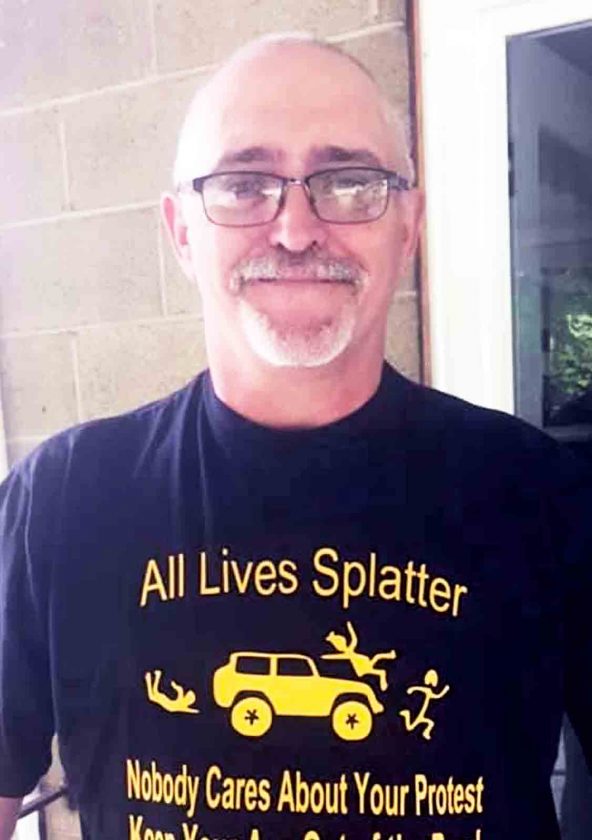 Martin Hess is shown wearing the T-shirt that caused Gov. Jim Justice to remove him from the State Fire Commission. (Photo Provided)

CHARLESTON — A photo of a Gilmer County volunteer fire chief and a member of the State Fire Commission advocating for protesters to be run over was the latest incident this week of insensitivity in the wake of the death of a black man in Minneapolis and the demonstrations that have followed.

According to Justice, several social media posts by Hess were brought to Justice’s attention that the governor said were “inappropriate and inflammatory.”

“My office has received information referencing various social media posts you have made which are inappropriate,” Justice said in a letter to Hess notifying him of his removal from the commission. “I will not tolerate behavior like this from anyone representing the state of West Virginia.”

One of those social media posts showed Hess wearing a T-shirt that read “All Lives Splatter. Nobody Cares About Your Protest. Keep Your a** Out of the Road.”

“Due to my post I have upset a lot of people and I am sorry for that,” Hess wrote. “By all means I did not mean (to) upset anyone.”

Hess’ removal follows a similar incident in Putnam County earlier this week. According to the Associated Press, Noah Garcelon resigned from the Winfield Police Department after social media posts came to light. According to the now-deleted social media posts screen grabbed by WSAZ-TV, Garcelon posted on his Facebook page that he would “start firing live rounds” at protesters and that protesters were a “bunch of animals.”

In another post, Garcelon said he would “see how many I can run over before my car breaks down.” Garcelon also is under investigation by the West Virginia National Guard.

“We’ll be taking the appropriate disciplinary action related to that individual or any others who make inflammatory comments related to protests going on across the nation,” said Maj. Gen. James Hoyer, adjutant general of the West Virginia National Guard, during the state’s daily coronavirus briefing earlier this week.

While some protests expressing outrage at the death of George Floyd have turned into violent riots with vandalism and looting, many have been peaceful demonstrations. Former Minneapolis police officer Derek Chauvin has since been charged with second-degree murder and second-degree manslaughter in Floyd’s death as the officer who kept his knee on Floyd’s neck.

Two autopsies have called Floyd’s death a homicide. Three other officers were charged with aiding and abetting.

Last weekend and several times this week, protests across West Virginia have remained peaceful, garnering the support and praise of Justice. However, even Justice has been accused of insensitivity this week after comments about the country’s first black president, Barack Obama. During his briefing Wednesday, Justice said all presidents would be welcome in the state except for Obama after President Donald Trump called during the briefing.

“I wanted (Trump) to always know just how welcome he is in West Virginia,” Justice said. “And any president we should absolutely welcome all, but probably not Barack Obama.”

Justice walked back the comment Thursday, calling the remark a joke and that he was talking about Obama policies and regulations regarding the state’s coal industry and not the color of his skin.

“I would surely hope that anyone who knows me knows that there’s not a racial bone in my body,” Justice said. “From the standpoint of people casting stones in that regard, that’s just terrible.”

Justice was in hot water earlier this year after making disparaging comments about the Woodrow Wilson High School girls’ basketball team, calling the mostly black student-athlete team from Raleigh County “thugs” after a series of fouls against the team Justice was coaching, the Greenbrier East High School girls’ basketball team. The Woodrow team left the bench after a Greenbrier East fan got into a fight with a Woodrow assistant coach.

“They’re a bunch of thugs,” Justice said in an interview after the game with the Beckley Register-Herald. “The whole team left the bench, the coach is in a fight, they walked off the floor, they called the game.”

Last November, an entire graduating class of correctional officers and several instructors was fired by the Division of Corrections and Rehabilitation after a picture surfaced of the class giving a Nazi salute. According to an internal investigation, some cadets – including a black cadet – started giving the salute to former instructor Karrie Byrd. Instead of putting a stop to the salute, Byrd – who taught the cultural diversity class at the academy – allegedly encouraged it.

Byrd later made the entire class give the salute for the class photo, with several cadets expressing that they felt they had to or they would not be allowed to graduate or be accused of disobeying an instructor. Some gave closed-fist salutes as to not give the open-palmed Nazi salute. All 37 members of the class were fired, as were three instructors including Byrd. Four other staff members were suspended.